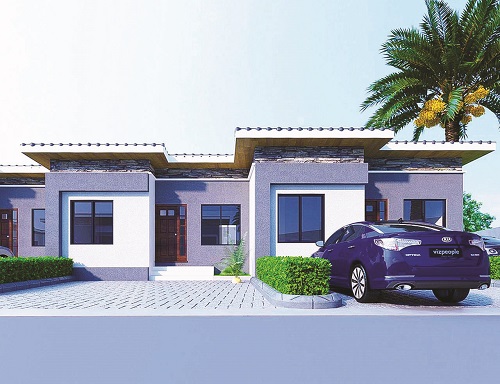 On the Lagos-Ibadan Expressway axis lies an estate illustrating serenity at its best.

At the ground breaking of Idera de estate, Managing Director, Roland Properties and Allied  Services, Dotun Oloyede, said just  as he had developed properties in Lekki and the United Kingdom, he choose MOWE to create serenity from the chaotic facade of the bustling town on the highway.

On what his plans for the 24 hectares of land, he said the idea was to build a self-sufficient community  where residents would not need to go out of the estate for anything.

The estate, he said, will consist of a green area, clinic, grocery store, a recreation centre and a school that would be managed by a reputable one.

According to him, the medium income estate remains a direct solution to the 25 million housing gap nationally.

Asked how the road infrastructure would be fixed, he said like in almost every where they have developed, they liaised with the community to build access and durable road.

On the estate’s other values,  Oloyede said ozone depletion in the estate and surroundings would be minimal as a result of the type of materials that would be used and the generous greenery.

Read Also: Toyin Lawani: Why I teamed up with Gtext homes

He said the company would be five years next year; and it would leave a signature input with the estate .

On the house types, he said there would be 2,  3-bedroom apartments and terrace duplexes.

He said his firm was out to cater for almost every housing need.

On the 3-bedroom apartments, we have Classic (carcass) at N11.5 million, Standard (finished without fitting) at  N13 million, Executive (finished with fittings) at N15 million and Premium (Smart Home) at N19.5 million.

The Head, Sales and Marketing, Roland Properties and Allied  Services, Oludotun Olaomi, said the company was committed to ensuring that people became land owners with ease; and whatever we promise is what we deliver, we even over deliver, he added.

The firm’s Legal Adviser, Olusonu Oluyode, affirmed that the land is not under acquisition as buyers will not only take possession but also given their titles.

A real estate investor, Ademola Adeoye said he has been stuck with the company as a result of not only their resilience and strong drive but also their unwavering integrity.