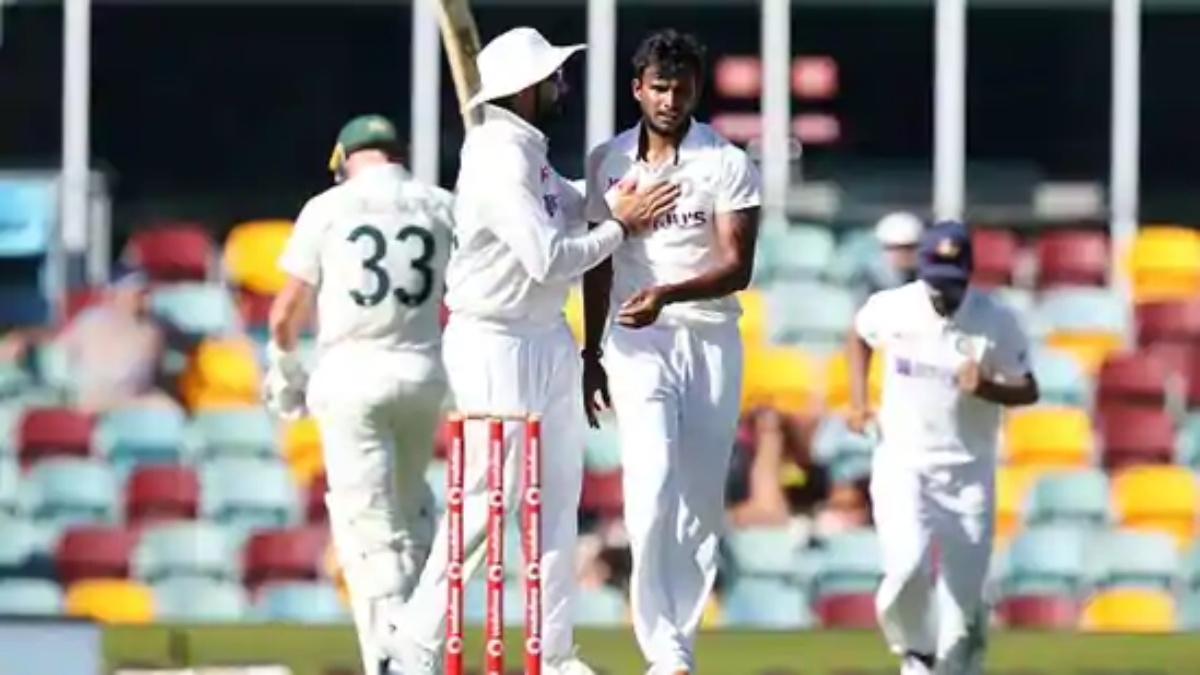 T Natarajan had a quite a good debut against Australia in the fourth Test match which is currently underway at The Gabba in Brisbane. He scalped a couple of wickets and bowled for 20 overs. Natarajan conceded 63 runs bowling a couple of maidens. Needless to say that, this was quite a good day for the pacer. Hailing from a small town from Tamil Nadu, Natarajan has one of the most inspiring stories in the cricketing world as a boy from humble beginnings who is making huge waves in international cricket. The left-arm medium-pacer was recently added to the Indian Test squad for the series against Australia and after initially traveling as a net bowler, the cricketer from Tamil Nadu could return home as an international in all three formats. T Natarajan, Shardul Thakur Replace Injured Umesh Yadav and Mohammed Shami in India Test Squad Against Australia.

Born in Chinnappampatti, a small village near Salem in Tamil Nadu, Thangarasu Natarajan had a modest upbringing as a son of a daily wage construction worker, and cricket provided an escape to the young dreamer. Till the age of 20, the left-arm bowler played with a tennis ball but when an opportunity presented itself, he grabbed it with both hands.

T Natarajan was first spotted by former Indian first-class cricketer and Test cricket umpire Arani Jayaprakash, who has played an important role in the development of the bowler. The Tamil Nadu cricketer at the start of IPL 2020 had sported the name ‘JP Nattu’ on the back of his jersey as a tribute to him.

Natarajan made his first-class debut in 2015 and after a mixed start came into the limelight in 2016 during TNPL where he bowled Yorkers at will. This got IPL teams to notice the up and coming pacer, who was then bought Kings XI Punjab in 2017 for 3 crores, playing six games for the franchise. However, he was released the following season with  Sunrisers Hyderabad buying him in 2018 for INR 40 lakhs.

Game time was hard to come by as the bowler warmed the bench, playing no part in the 2018 and 2019 seasons. However, despite disappointments in India’s premier T20 tournament, Natarajan kept performing at the domestic level, helping Tamil Nadu to reach the finals of the Syed Mushtaq Ali Trophy in the 2019-20 season.

Eventually, T Natarajan’s patience was rewarded as he was given a chance in Sunrisers Hyderabad’s IPL 2020 opener and it was all it took. The pacer dismissed Indian skipper Virat Kohli on debut and kept on impressing over the course of the tournament with his spectacular bowling at the death, his clam head and inch-perfect yorkers.

T Natarajan took 16 wickets in IPL 2020 in as many games which earned him a call-up to the Indian team for the Australia tour, first as a net blower where he later became an important part of the Men in Blue’s success down under. The left-arm pacer made his international debut in the final ODI game of the series, impressing on route to India’s win.

This saw him being retained for all-three T20I games, where Natarajan once again managed to capture everyone’s attention as India won the series and the Tamil Nadu cricketer was the highest wicket-taker across the two sides.

Following the limited-overs series, the cricketer stayed back in Australia with the squad a now, the pacer has a chance to make a mark in the toughest and longest format as he replaced injured Umesh Yadav, who returned to India after picking up an injury.

(The above story first appeared on Reportr Door on Jan 15, 2021 03:02 PM IST. For more news and updates on politics, world, sports, entertainment and lifestyle, log on to our website reportrdoor.com).

India vs Australia 4th Test 2021: Rishabh Pant Urges Ajinkya Rahane to Take Review, Rohit Sharma Laughs Over Wicket-Keeper’s Excitement (Watch Video)
Claire Williams: ‘Will Fade Up’ with Williams F1 and ‘All the People in It’
Comment