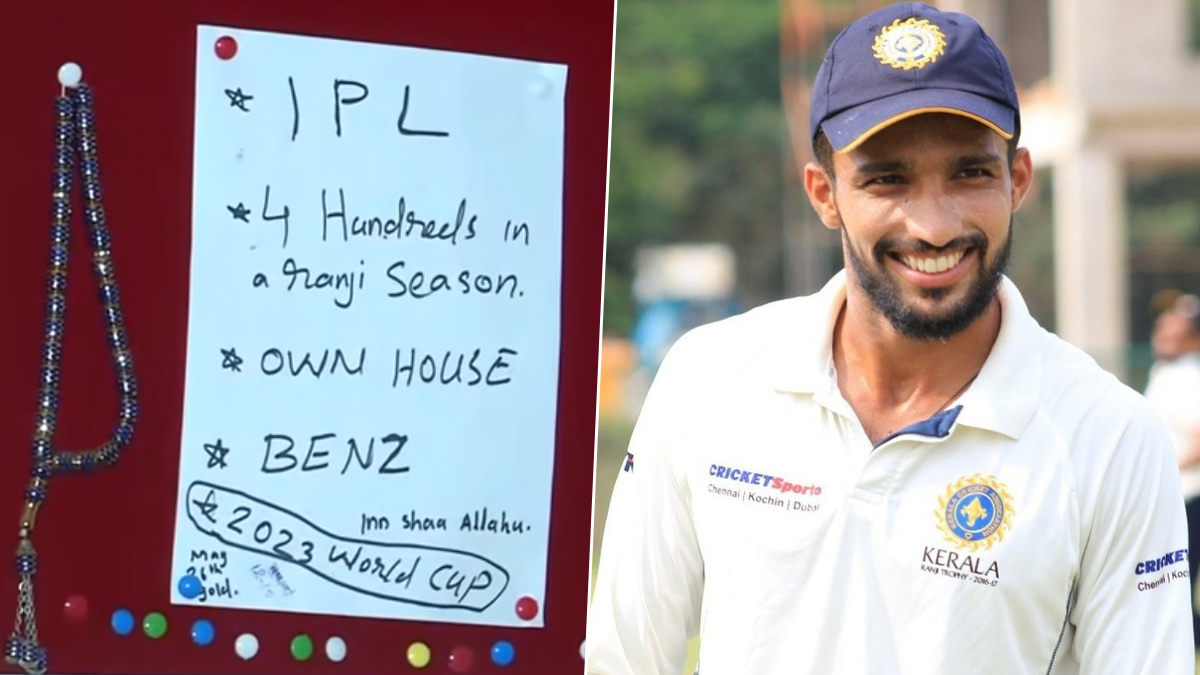 Kerala Opening batsman Mohammed Azharuddeen, who led his side to a remarkable win against Mumbai with a breathtaking 37-ball century, had a number of wishes growing up. Among them were playing the IPL and buying a Mercedes Benz. The 26-year-old’s bucket list has gone viral after he played that wonderful knock in the Syed Mushtaq Ali Trophy. His knock of 137 not-out from just 54 deliveries was studded with nine boundaries and 11 maximums and it helped Kerala chase down a 197-run target in just 15.5 overs. Syed Mushtaq Ali Trophy 2021: Baroda Continue Winning Streak, Thrash Maharashtra by 60 Runs.

The Kasaragod-born cricketer has a very short wish list among which are representing India at the 2023 Cricket World Cup and hitting four hundreds in a single Ranji Trophy season. His century off just 37 deliveries against Mumbai in the Syed Mushtaq Ali T20 Trophy is the third fastest T20 century by an Indian after Rishabh Pant (32 deliveries) and Rohit Sharma (35 balls). Syed Mushtaq Ali Trophy 2021: Assam Ride on Pritam Das and Riyan Parag Show to Beat Bengal by 13 Runs at Eden Gardens.

His bucket wishlist went viral after a local television channel visited Azharuddeen’s house to interview his family members after his whirlwind knock. The Kerala star, who shares his name with Indian cricket legend Mohammad Azharuddin, had already been deemed the next ‘Azhar’ of Indian cricket. While interviewing the cricketer’s family, the reporter bumped into the wishlist of Azharuddeen pasted on a red board in his room wall. Take a look at the video.

Kerala have won each of their three matches and currently lead Elite Group E in the Syed Mushtaq Ali T20 Trophy. They have beaten Puducherry, Mumbai and Delhi in their three matches. Azharuddeen scored 30 off 18 deliveries in the six-wicket win over Puducherry while he was out for a golden duck against Delhi on either side of his hundred.

(The above story first appeared on Reportr Door on Jan 16, 2021 11:44 PM IST. For more news and updates on politics, world, sports, entertainment and lifestyle, log on to our website reportrdoor.com).