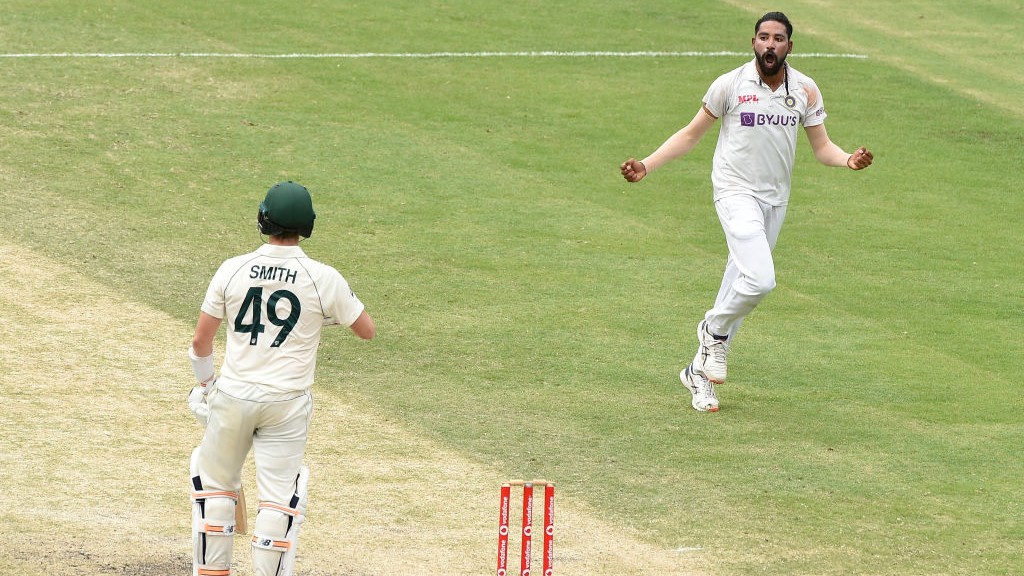 Brisbane, January 18: As pacer Mohammad Siraj recorded his maiden five-wicket haul in Test cricket on Monday, the Board of Control for Cricket in India (BCCI) said that it could not be more proud of the achievement.

Siraj’s hard work paid off on the fourth day of the ongoing fourth Test against Australia here at The Gabba as he went on to register his maiden five-wicket haul. The Indian pacer has played three Test matches on this tour of Australia, and has returned 13 wickets.

“Before the Border-Gavaskar Test series, Siraj lost his father. He then made a promise to himself. Today, he fulfilled it. Siraj, we are all very proud of you,” BCCI tweeted. Mohammed Siraj Leads Team India Towards Dressing Room After Scalping Maiden Five-Wicket Haul in Brisbane (Watch Video).

Before the Border-Gavaskar Test series, Siraj lost his father. He then made a promise to himself. Today, he fulfilled it.

Siraj, we are all very proud of you. #TeamIndia #AUSVIND pic.twitter.com/VUMhgJsJO4

Despite losing his father, Siraj decided to stay back in Australia to fulfill his father’s dream of seeing him play Test cricket. Prior to the series, Siraj had said: “It is a very big loss for me, my father always supported me. It was his dream that I keep on playing for India and make the country proud. I just want to fulfill my father’s dream and that is why I keep on thinking that my father will always be there with me.”

“In this situation, every team member has supported me and it really felt nice. Virat Bhai also told me not to worry and he asked me to stay strong. I talked to my mother and she told me to stay back in Australia and fulfill my father’s dream,” Siraj told BCCI.TV.

After the close of play on day four of the Gabba Test, Siraj revealed that it has been very tough for him, but a phone call from his mother gave the pacer much-needed confidence to go out and express himself.

“I am thankful that I was able to pick five wickets as it was a very tough situation for me after my dad passed away. But after talking to my mom at home, I gained some confidence. The call with my mom made me mentally strong. My focus was to fulfill my dad’s wish,” said Siraj while replying to a query from ANI. India vs Australia 4th Test 2021 Stat Highlights Day 4: Mohammed Siraj Registers Maiden Five-Wicket Haul in Tests.

In the final session, with rain playing spoilsport, the Indian openers Rohit Sharma and Shubman Gill could face just 1.5 overs before the umpires decided to call for early stumps. India need 324 runs on the final day with 10 wickets in the bag at Australia’s fortress — The Gabba.

Virender Sehwag on Mohammed Siraj After Picking Maiden 5-Wicket in Test Cricket Says ‘The Boy Has Become a Man on This Tour’
This Day, That Year: AB de Villiers Smashed Fastest Century in ODIs Against West Indies in 2015
Comment