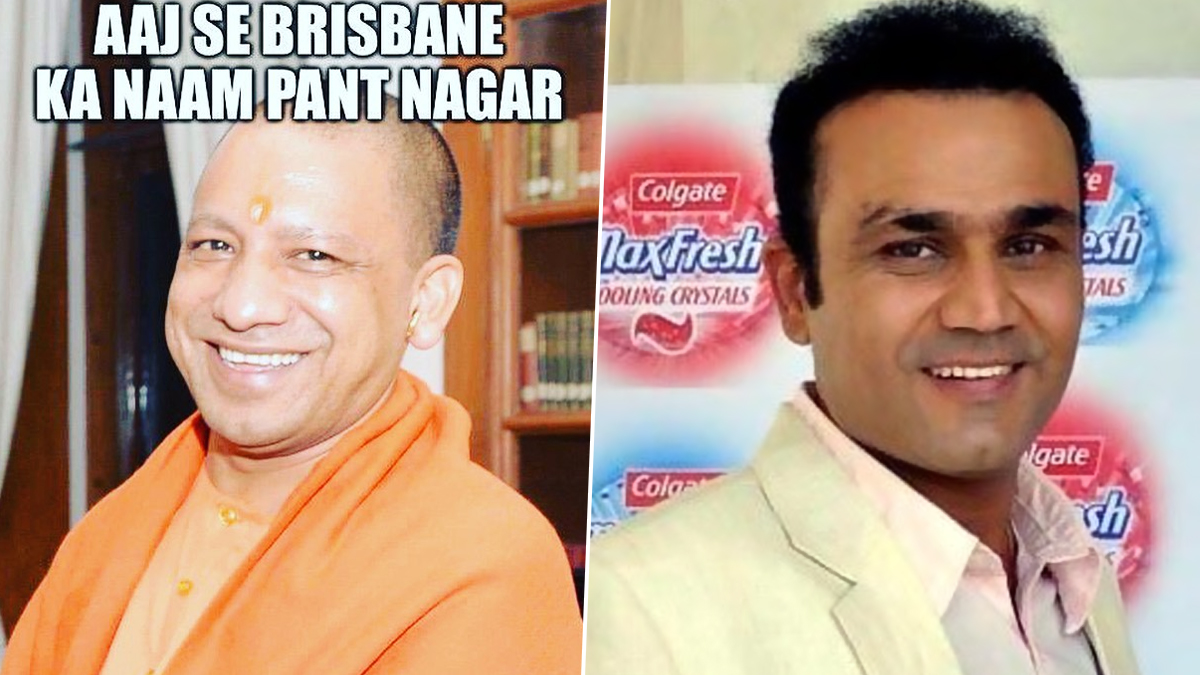 Virender Sehwag doesn’t mind changing Brisbane’s name to ‘Pant Nagar’ especially after the 23-year-old southpaw blew out Australia with a magnificent knock and guided India to a historical win at the Gabba. Pant’s knock of 89 not-out, which was studded with nine boundaries and a maximum over long-on off Nathan Lyon, helped India sail home with three wickets to spare and end Australia’s 32-year unbeaten streak at The Gabba. Sehwag shared a meme on social media, which called for Brisbane’s name to be changed to ‘Pant Nagar’. Video of Australian Fan Shouting ‘Bharat Mata Ki Jai’ and ‘Vande Mataram’ Slogans Goes Viral After India Beat Hosts at the Gabba To Win Series.

“Kyun nahin,” Sehwag captioned the meme and wrote the series win over Australia was once in a generation thing. “This series win is the kind of victory which one doesn’t get to see in generations . Nothing else matters. Is jeet ki khushi saalon tak manayi jaani chahiye (This win should be celebrated for years). 19 January Fateh . Jai Bharat,” the Nawab of Najafgarh said. Take a look at his post. India Presents Australia Spinner Nathan Lyon With Signed Jersey for Completing 100 Test Matches (Watch Video).

Pant was the difference maker eventually as India shattered Australia’s bastion and beat them in successive Test series in their own turf. His unbeaten knock powered India to victory and completed perhaps one of the greatest comebacks of our times.

He played a blinder of an innings to lead India to a memorable win after stepping at the crease at a time when victory looked to be slipping away. Rohit Sharma departed early on the final and although Shubman Gill (91) and Cheteshwar Pujara’s 114-stand kept hopes alive for a maiden Indian win at The Gabba, two quick dismissals put Australia ahead. Gill was out nine runs short of a first international hundred while captain Ajinkya Rahane didn’t last long either.

Pujara and Pant held ship and shared a 61-run stand – their combination once again rain hopes of a victory like it did it Sydney. But Pujara fell to a sharp delivery from Pat Cummins with India still 100 runs short in the chase and with only one recognised batsman to follow. Mayank Agarwal was out for nine runs playing an uppish drive off Cummins.

It was then left to Pant to either see India home or avoid defeat with the tailenders at the other end. He commanded a 53-run partnership with Washington Sundar, allowing the latter to play freely. But Sundar and Shardul Thakur were dismissed trying to hurry the chase. India needed three runs to win and Australia two wickets. Pant had seen enough. He played Josh Hazlewood straight through mid-off for the winning boundary.

(The above story first appeared on Reportr Door on Jan 19, 2021 11:36 PM IST. For more news and updates on politics, world, sports, entertainment and lifestyle, log on to our website reportrdoor.com).