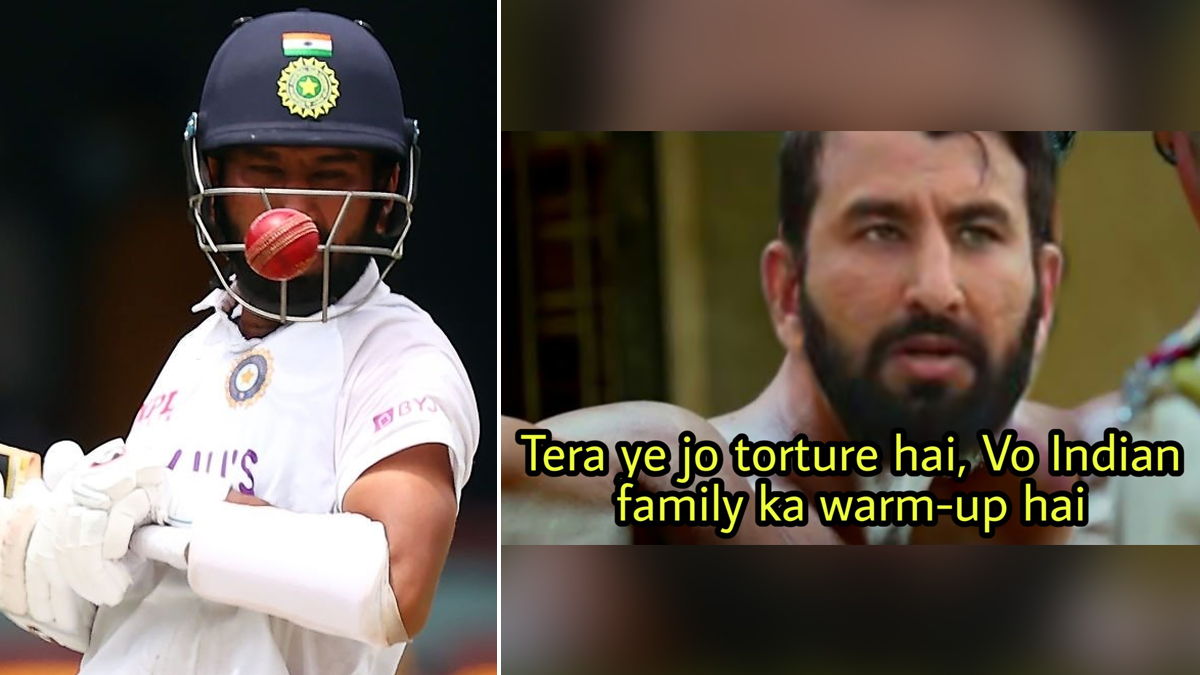 “Bruised. Broken. But never short of character,” said Ajinkya Rahane after India secured a history draw in the third Test at the Sydney Cricket Ground (SCG). Well, these lines are indeed perfect to describe Cheteshwar Pujara’s resilience in the final day of the fourth and deciding Test at the Gabba in Brisbane. Coming to bat after the early dismissal of Rohit Sharma, the right-handed batsman showed great character and justified his title of the modern-day wall. The batting conditions were indeed challenging as there were many tracks on the Gabba track and the Aussie pacers were breathing fire. India vs Australia 4th Test 2021 Score Updates Day 5.

Pujara, in fact, sustained numerous blows on the body from the bouncers but his defence remained solid. Netizens were enthralled by Pujara’s fight as social media got flooded with hilarious memes. While he played with a dead bat in the initial part of his innings, the 32-year-old shifted gears after settling his feet and notched up his 28th half-century in Test cricket. Tim Paine & Co were visibly frustrated as Pujara became the difference between them and victory. Meanwhile, let’s look at how Twitterati reacted to the talismanic batsman’s resilience. Rohit Sharma Trolled With Funny Memes After Being Dismissed Cheaply.

After Battling With Bouncers!!

Pujara on next tour of Australia pic.twitter.com/zKeQkw1U7T

Meanwhile, India have the command in the on-going clash as the Aussies need seven wickets in the last 20 overs to win the game. Pujara and Rishabh Pant are the two batsmen at the crease, and the duo have looked comfortable in the middle. Notably, the visitors need just over 100 runs in more than 20 overs, and they can also go for a win. Moreover, Team India won the previous Test series between these two sides in 2019. Hence, if this series ends in a draw, Ajinkya Rahane’s men will retain the Border Gavaskar Trophy.

(The above story first appeared on Reportr Door on Jan 19, 2021 11:41 AM IST. For more news and updates on politics, world, sports, entertainment and lifestyle, log on to our website reportrdoor.com).