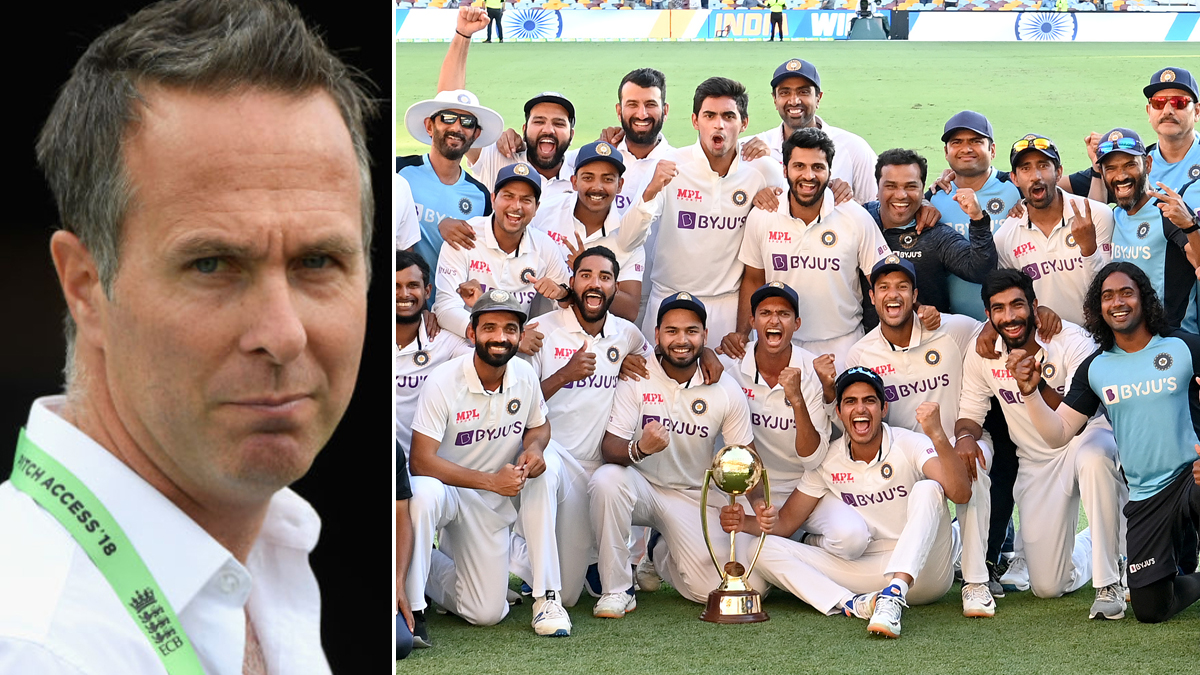 Former England captain Michael Vaughan got brutally roasted on Twitter after Team India defeated Australia by three wickets in the fourth Test, winning the series 2-1. Vaughan predicted that Ajinkya Rahane’s men would suffer a 0-4 whitewash following India’s humiliating eight-wicket defeat in the first Test at the Adelaide Oval. India registered their lowest ever Test total (36) in that game, and regular skipper Virat Kohli flew back home after the game for his first child’s birth. With all the odds against the visitors, the former England skipper was one of many who believed that India would not bounce back. Ravi Ashwin Takes to Twitter to ‘Give it Back’ to Tim Paine After Sledging Incident.

Contrary to the expectations, India, despite a depleted squad, put up a brilliant show in the next three games. While they won the second Test by eight wickets, Rahane and Co secured a historic draw in the third match. India were brilliant in the final Test as well as Vaughan and many other cricket experts were proved wrong. While social media got flooded with praises for Team India, several netizens also dug out Vaughan’s month old tweeted which says: “Told ya … India are going to get hammered in the Test Series … #AUSvIND #4-0.” Virat Kohli Praises Team India’s Grit and Determination After Historic Series Victory Over Australia.

As his prediction proved to be completely wrong, Twitterati mercilessly trolled the former England batsman. While some brought up facts and records, others reacted with hilarious memes. Have a look!

#AUSvsIND All of India to Mr. Michael Vaughan.

Some of the best cricket ever seen. pic.twitter.com/DUl4qjipTE

Hey Vaughan, listen to this slogan in the background 😍💪💪😊 pic.twitter.com/RrL4Jb7NMA

Boy!! This snapshot will be framed along with Border Gavaskar Trophy at BCCI HQ 😍😇😇 pic.twitter.com/7BiTmcIuFK

After predicting #IndianCricketTeam‘s next series

Coming to the action of Day 5, India lost veteran opener Rohit Sharma cheaply while chasing 327 on a deteorating  Gabba track. Nevertheless, Shubman Gill and Cheteshwar Pujara forged a 114-run stand for the second wicket, keeping India in the hunt. However, the star of the day was Rishabh Pant who took the Aussie bowlers by storm and scored an unbeaten 89 off 138 balls. As a result, Australia suffered their first Test defeat in Brisbane in 32 years.

With this win, India also displaced Australia at the top of ICC World Test Championship points table with this win. They also become the new second-ranked Test team whereas the Aussies slip down to the third spot.

(The above story first appeared on Reportr Door on Jan 19, 2021 04:06 PM IST. For more news and updates on politics, world, sports, entertainment and lifestyle, log on to our website reportrdoor.com).