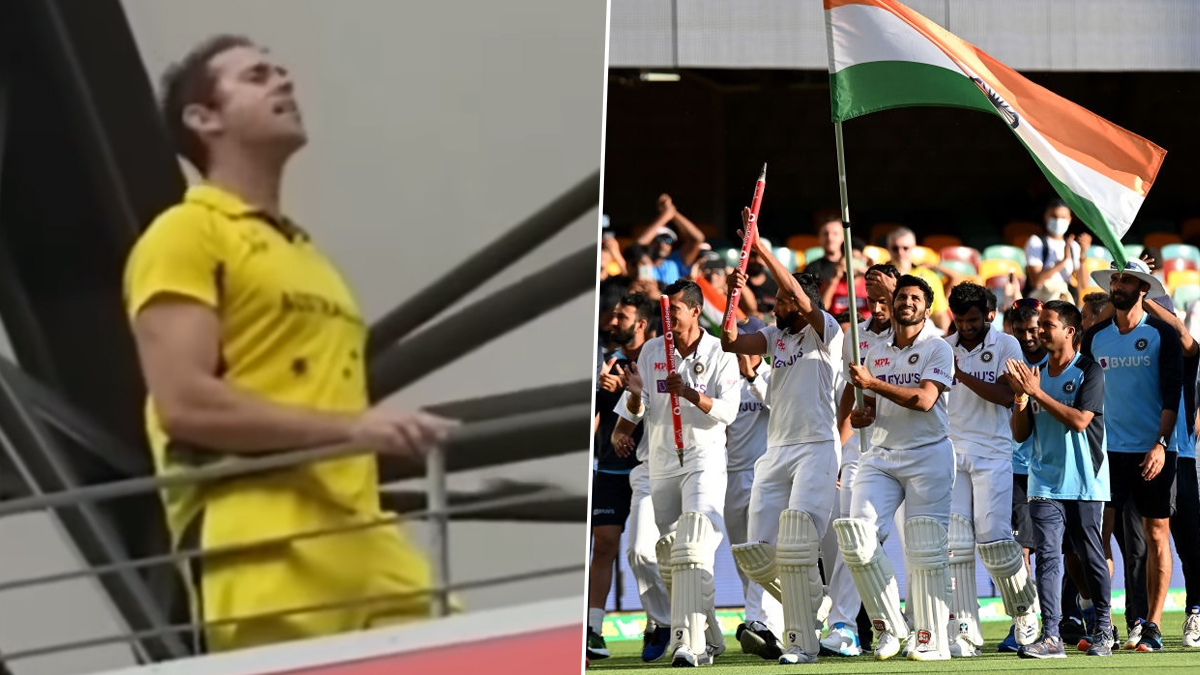 An Australian fan leading chants of ‘Bharat Mata Ki Jai’ and ‘Vande Mataram’ during the IND vs AUS 4th Test has gone viral after India beat Australia by three wickets in the latter’s bastion at The Gabba on Tuesday. India ended Australia’s 32-year unbeaten record at the Gabba after chasing down 328 runs on the final day of the fourth Test. The win secured a 2-1 series win for India and made them the first team in a long long time to record consecutive Test series wins on Australian soil. Chants of ‘Bharat Mata ki Jai and ‘Vande Mataram’ reverberated across the stadium as the Indian team went on a victory lap. Rishabh Pant Leads Team India’s Victory March With National Flag At The Gabba Following Test Series Win Over Australia (Watch Video).

Later a video showing an Australian fan, wearing the Australian limited-overs jersey, leading the chants and slogans. In a video, the fan can be seen leading the sloganeering with the Indians following him in unison. Take a look at the viral video. India Presents Australia Spinner Nathan Lyon With Signed Jersey for Completing 100 Test Matches (Watch Video).

The video was reportedly taken on day 4 of the final Test at The Gabba. It was after India had bowled-out Australia for 294 and set themselves a 328-run target to win the Test and clinch the series victory.

There were instances in day 5 also when the Indian fans cheered slogans of ‘Bharat Mata Ki Jai’ and ‘Vande Mataram’ after the Indian team had scripted a famous Test win having overcome adversaries and challenges to put together a fit team for this Test.

Never Ever Underestimate the Indians

Australia coach Justin Langer also was in awe of India’s performances in the Test series and how the visitors found a new hero every time they were in trouble. “Never underestimate the Indians,” he said at the post-match interview with the broadcasters. “There are 1.5 billion Indians. And if you play in that first 11, then, you are going to be really tough… I cannot compliment India enough. After the first Test match, where we got them out in 3 days for 36 runs, the fightback from them is amazing. Sometimes there are big lessons for us too. You don’t take anything for granted.”

(The above story first appeared on Reportr Door on Jan 19, 2021 10:49 PM IST. For more news and updates on politics, world, sports, entertainment and lifestyle, log on to our website reportrdoor.com).

Brisbane Should Be Renamed As Pant Nagar After Match Winning Performance of Rishabh Pant? Virender Sehwag Says Why Not!
Rohit Sharma Applauds India’s Fearless Approach, Says ‘No Matter What Hardships Came Our Way We Made It Through’ (See Post)
Comment