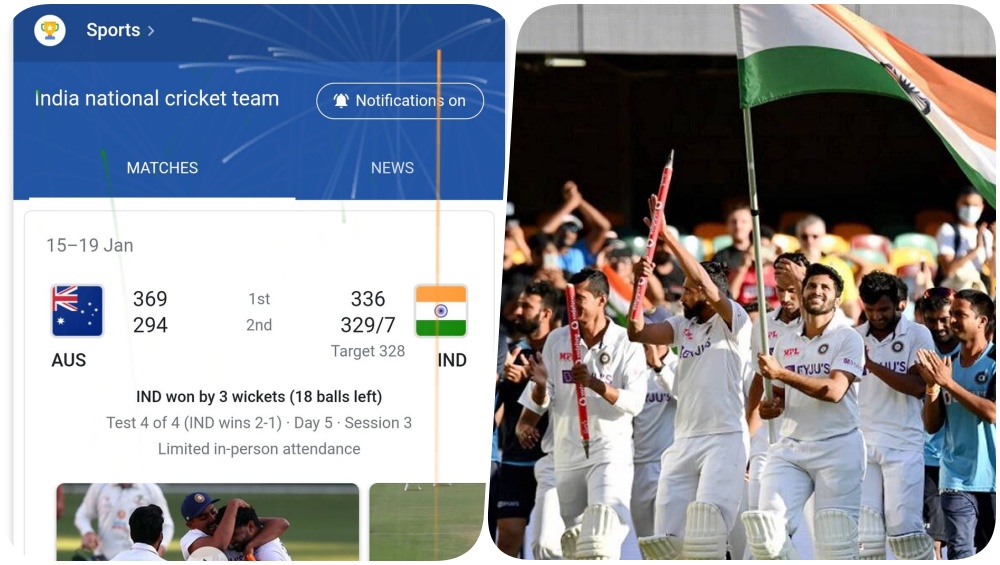 India went on to win the four-game series against Australia at The Gabba. Prolific performances from the team lead them to win the series by 2-1. While all the fans, cricketing pundits and others are hailing the team for the feat. Now even Google celebrated the stunning win and how? So the official account of Google India posted a tweet on social media and offered a gift for all the fans. Google India asked the fans to search ‘India National Cricket Team’ which leads users to virtual fireworks. Ravi Shastri Credits Virat Kohli for India’s Self-Belief and Character After Historic Win in Gabba Test.

It was the all-round performance by the team at the Gabba that led the team to a stunning win. In the first innings when Australia was batting, we had T Natarajan, Shardul Thakur and Washington Sundar scalped three wickets each. When India walked in to bat chasing a total of 369 runs, and we once again had Shardul Thakur and Sundar scoring 67 and 62 runs respectively. In the second innings, we had Mohammed Siraj scalped five wickets. In the second innings when India came into bat, we had Rishabh Pant scored 89 runs and led the team to a stunning win.

Now, let’s have a look at the tweet by Google India.

Still celebrating India’s win? Us too ✨

Search for “India National Cricket Team” for a surprise 🏏

A while ago we told you that Ravi Shastri also admitted getting emotional after winning the Test series. After a series win, he lauded Rishabh Pant and Team India for the grit they showed during the game.

(The above story first appeared on Reportr Door on Jan 20, 2021 11:03 AM IST. For more news and updates on politics, world, sports, entertainment and lifestyle, log on to our website reportrdoor.com).