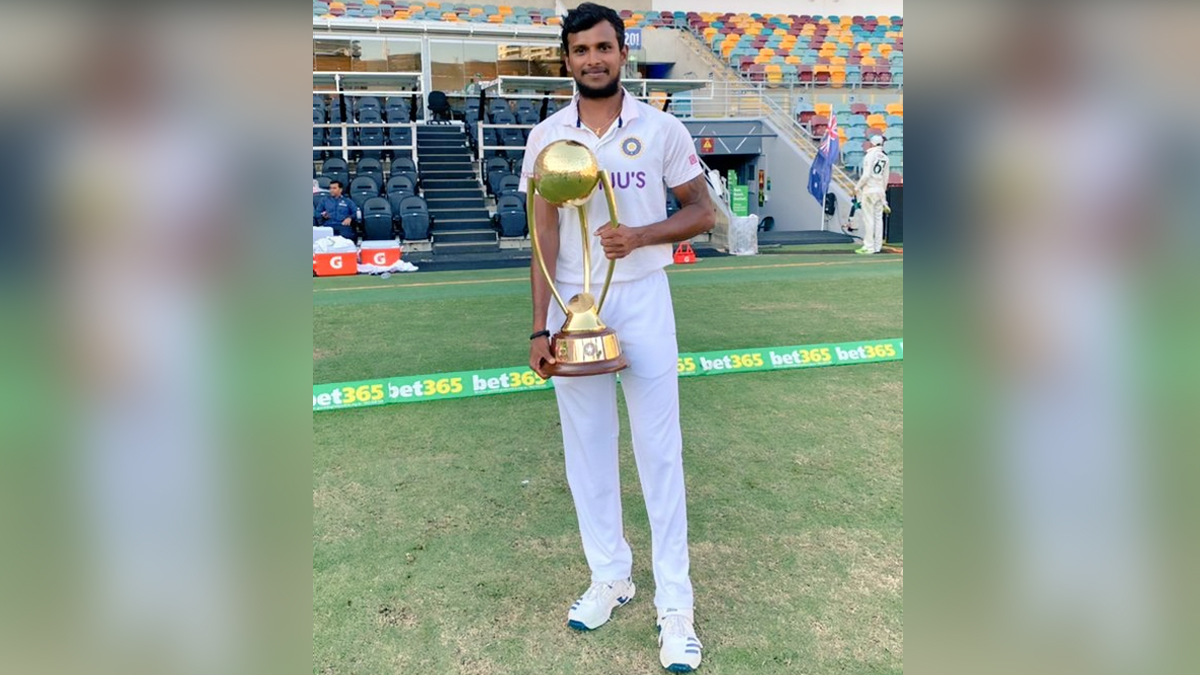 New Delhi, Jan 20: Pace bowler T Natarajan had all odds stacked against him growing up. His family, led by father who toiled for daily wages and mother who ran a roadside shack, had little money and his house had no TV on which he could watch cricket and pick his initial lessons. But there was one thing he had managed to pick in the dusty village fields around Salem in Tamil Nadu while playing tennis ball cricket — ability to bowl fast. T Natarajan Rises Down Under! From Playing Tennis Ball Cricket in Chinnappampatti to Making Debut in Indian Test Team, Know All About the Inspirational Journey.

“I wouldn’t even call it humble background. He comes from poverty. In his early years he was playing simple tennis ball cricket in village, middle of nowhere on small and dusty grounds in small villages. Nobody taught him to bowl. He didn’t even have a TV to see cricket matches,” RS Ramaswamy, secretary of Tamil Nadu Cricket Association (TNCA), told IANS. Rishabh Pant Achieves Career Best Position in ICC Test Batting Rankings, Virat Kohli Drops down to Fourth Spot.

Ramaswamy has known Natrajan for close to a decade as he had been the secretary of the Salem district cricket body as well.

Back in 2009, Natarajan came to his village ground where he found some people playing cricket. He offered to bowl. At that time he was playing village tournaments that offered small cash as prize money.

“There was this gentleman Jayaprakash who watched him bowl and saw potential and brought him to town. He called him for selection for Salem district. That is when he bowled with the cricket ball for the first time. We picked him for district cricket,” said Ramaswamy.

In 2010, he came for Salem district under-22 team selections. That was the stepping stone. After league cricket in Salem, the left-arm pace bowler moved to Chennai and began playing fourth division league in 2011. A year later, he moved to the second division and then started representing the state association team in tournaments like the Buchi Babu Tournament to come into reckoning for the state.

Natarajan played his first Ranji Trophy game in 2015, an event that should have been celebrated. However, he was called for a suspect action in the game and had to return to work on his action.

However, it was the Tamil Nadu Premier League that catapulted him into limelight. He shared the same dressing room space as India international R Ashwin in the T20 league.

From there it was the IPL and the Indian team to Australia, where he made international debut across all formats within a gap of 44 days, something no Indian has done before. Due to quarantine and being away from family for long, he is yet to see his daughter who was born during the Indian Premier League.

Unlike other bowlers who give vent to their emotion after taking a wicket, Natarajan betrays no hint of emotion.

Asked during the IPL about this by Murali Kartik in a TV interview, Natarajan said, “I don’t celebrate. I just take it coolly whether I take a wicket or hit for a six. I have seen him like this for the last 8-9 years,” said Ramaswamy.

(The above story first appeared on Reportr Door on Jan 20, 2021 04:36 PM IST. For more news and updates on politics, world, sports, entertainment and lifestyle, log on to our website reportrdoor.com).