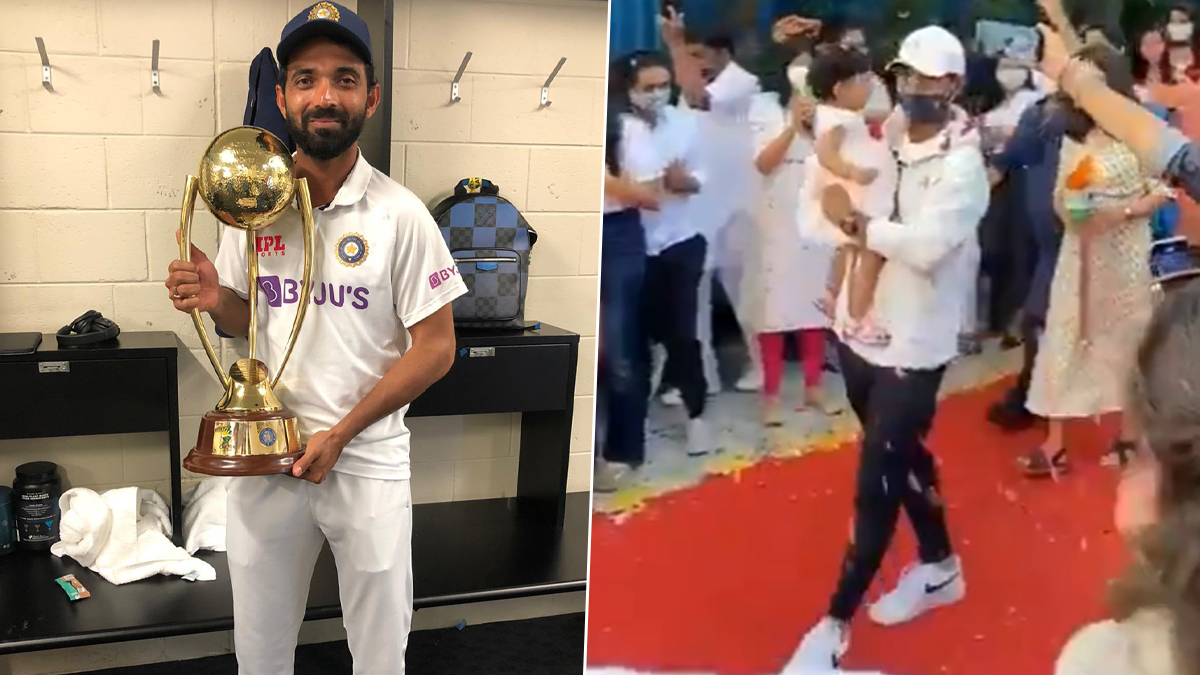 Ajinkya Rahane arrived home to a grand welcome from his neighbours after leading India to a historic Test series win in Australia. Rahane, who stepped in as the captain after the departure of Virat Kohli on paternity leave, scored a majestic hundred at Melbourne which triggered India’s comeback in the series after they had slumped to their lowest point in Test cricket. Rahane, accompanied by his wife and daughter, was greeted with a red carpet and showering of flower petals as he entered the society where he resides. Ravindra Jadeja Ruled Out of Four-Match Test Series Against England, Says Report.

The 32-year-old, who lives in Dadar near Ruparel college, was accompanied by his wife Radhika Dhopavkar and two-year-old daughter Aarya. Neighbours and fans inside the society chanted and cheered “aala re aala, Ajinkya aala,” (Ajinkya has come!) and welcomed him with Shehnais and dhol tashas. Many captured the moment on their phones and later shared it on social media. Take a look at the video. Anushka Sharma and Virat Kohli Get Clicked for the First Time Together After Welcoming A Baby Girl (View Pics).

“As a father, I feel proud to see how my son led the team successfully when they were in a deep crisis in Australia. We could not go to meet to receive him at the airport, nor could we go to meet him his residence, as we had a family function at Kalyan,” Rahane’s father was quoted as saying by the Times of India. “We spoke to him today after he reached home, on video call. Ghar mein Khushi ka mahaul hai. Humein Bahaut zyada khushi ho rahi hai (We’re overjoyed). ”

When Kohli left after India’s shambolic defeat at Adelaide, Rahane had to take charge and uplift the team to bounce back, No one could have then imagined India would go on to win the series. But Rahane led from the front and scored a match-winning hundred in the second Test at Melbourne, which sparked India’s comeback in the series.

(The above story first appeared on Reportr Door on Jan 21, 2021 04:00 PM IST. For more news and updates on politics, world, sports, entertainment and lifestyle, log on to our website reportrdoor.com).