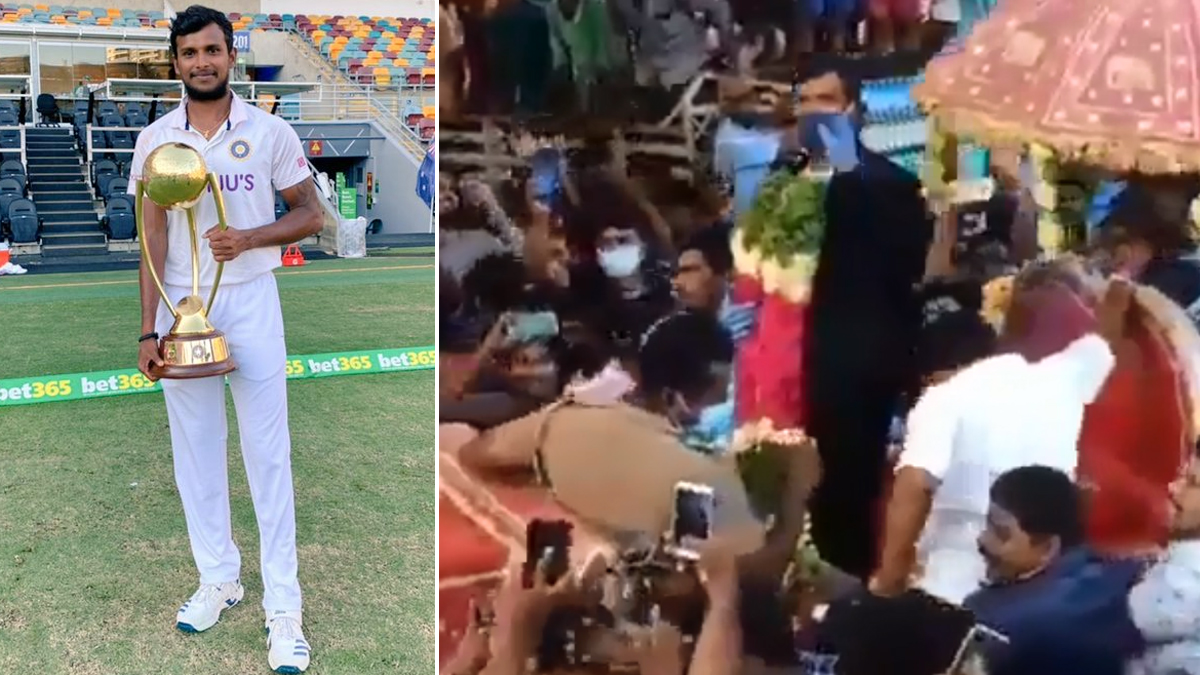 T Natarajan received a grand welcome on his arrival to his village after beating Australia 2-1 in the Test series. Natarajan returned to his village Salem to a rousing welcome from people of the village, who gathered in large numbers to welcome their hero as he made his way home. Former India cricketer Virender Sehwag shared a video of Natarajan being welcomes like a hero in his village and wrote cricket is not just a sport in India. It is so much more. Natarajan, who had travelled to Australia as a net bowler, went to make his India debut in all three formats. T Natarajan Rises Down Under! From Playing Tennis Ball Cricket in Chinnappampatti to Making Debut in Indian Test Team, Know All About the Inspirational Journey.

“Swagat nahi karoge ? This is India. Here cricket is not just a game. It is so much more,” Sehwag said posting a video of Natarajan being welcomed by scores of people from his village. “Natarajan getting a grand welcome upon his arrival at his Chinnappampatti village in Salem district. What an incredible story,” he added. T Natarajan: From Dusty Fields in Salem to Gabba High, Tamil Nadu Pacer’s Inspirational Journey.

In the video, Natarajan can be seen sitting in a chariot and a huge crowd cheers and welcomes him as their hero. The cricketer, a little emotional and awed by the occasion, tried his best to wave at each one of them. A police officer can also be seen accompanying Natarajan as he rides in the chariot. Take a look at the video.

This is India. Here cricket is not just a game. It is so much more. Natarajan getting a grand welcome upon his arrival at his Chinnappampatti village in Salem district. What an incredible story.#Cricket pic.twitter.com/hjZ7kReCub

Natarajan was only included in the T20I squad KKR spinner Varun Chakravarthy wad ruled with a shoulder injury. He then made his ODI debut after Ravindra Jadeja’s hamstring injury and then went to make his Test debut after a spate of injuries ruled out most of India’s premier pace attack.

(The above story first appeared on Reportr Door on Jan 21, 2021 07:37 PM IST. For more news and updates on politics, world, sports, entertainment and lifestyle, log on to our website reportrdoor.com).