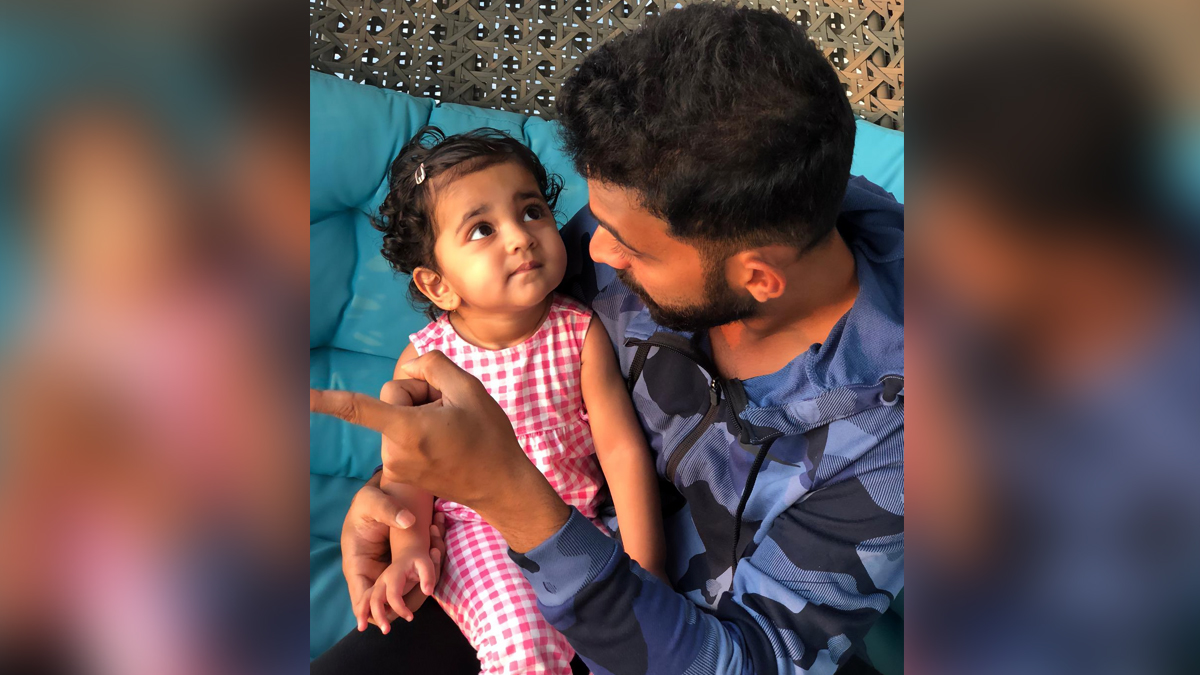 Five months since leaving home for UAE to play the Indian Premier League and from there to Australia, Ajinkya Rahane finally returned home and is now spending a well-earned quality time with his favourite people. Rahane, who captained India to a series win in Australia, shared a cute picture of him playing with his daughter. Rahane left for the UAE in August last year to play IPL for Delhi Capitals and from there departed for Australia with the national team. Rahane, and the rest of the Indian team, eventually returned home on Thursday. Ajinkya Rahane Politely Refuses to Cut ‘Kangaroo Cake’, Earns Respect From Netizens (Watch Video).

“5 months. 2 countries. 8 cities later, back to spending some quality time with my favourites, in my favourite city,” Rahane wrote on social media alongside a picture of himself and his two-year-old daughter Aarya. In the cute pic, Rahane, sitting on a couch, is pointing towards something as his daughter looks towards him. Take a look at his post. Ajinkya Rahane Gets Hero’s Welcome As He Returns Home After Test Series Win in Australia (Watch Video).

5 months. 2 countries. 8 cities later, back to spending some quality time with my favourites, in my favourite city ♥️ pic.twitter.com/vdmC15esfb

Rahane came home to a grand welcome from the residents of the society in which he resides. The residents laid out a red carpet and welcomed the India stand-in skipper with Shehnais and dhol as he arrived in the society. Many also chanted and cheered “Aala re aala, Ajinkya aala (Ajinkya has come). Rahane also attended a felicitation programme in the society later and celebrated India’s historic series win against Australia.

He oversaw a tremendous turn, courage and step up in performance as India fought back from 36 all out and a humiliating defeat in the first match to win the Test series 2-1 after beating Australia in Melbourne and Brisbane. India’s three-wicket win at The Gabba also ended Australia’s 32-year unbeaten streak at the venue and made India the first Asian team to win at the venue.

Rahane led from the front and scored a match-winning century in Melbourne to lead India to a glorious eight-wicket win in the second Test after a shambolic defeat in the first. He also led exemplarily and brought out the best from his depleted squad.

(The above story first appeared on Reportr Door on Jan 22, 2021 07:36 PM IST. For more news and updates on politics, world, sports, entertainment and lifestyle, log on to our website reportrdoor.com).