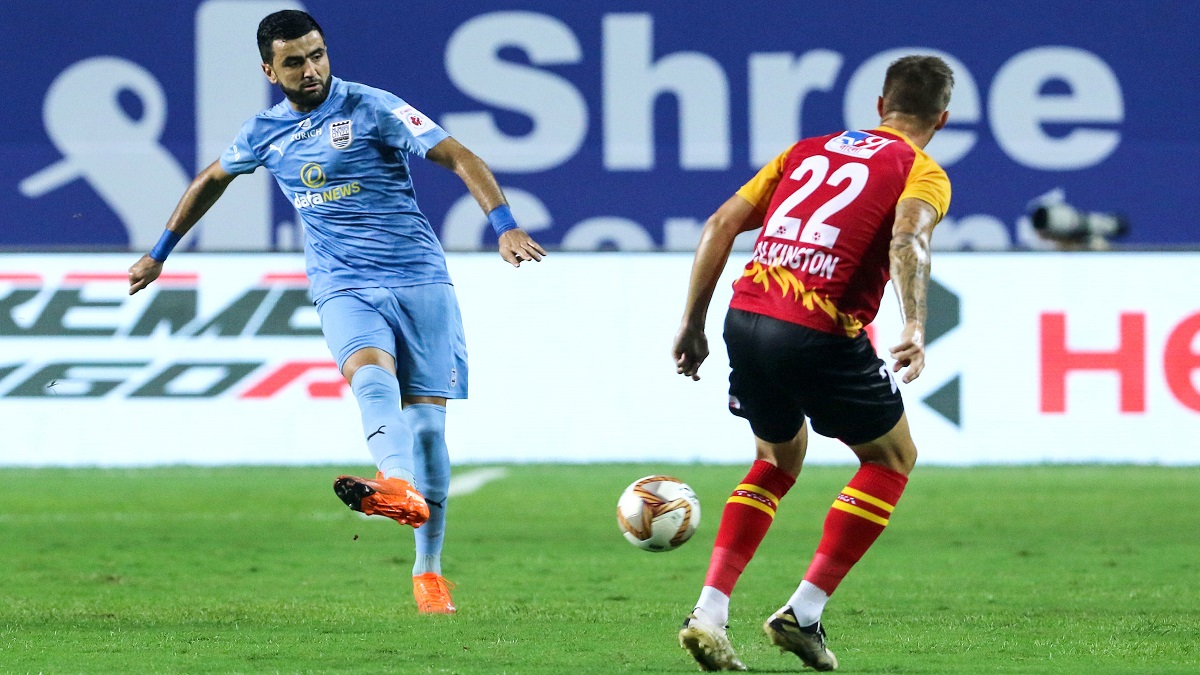 Vasco, January 22: Mumbai City FC overcame a tough challenge from East Bengal to sneak in a 1-0 win in the Indian Super League (ISL) at the Tilak Maidan Stadium on Friday. The win stretches Mumbai’s unbeaten run to 11 matches out of the 12 they have played thus far. Mumbai spurned a number of chances in the first half but managed to take the lead through Mourtada Fall in the 27th minute. A rejuvenated East Bengal pulled out all stops in their search for an equaliser in the second half, but frustratingly could not manage one.

Mumbai had a chance as early as the third minute when Adam Le Fondre found himself in a position to shoot after receiving the ball from Cy Goddard but his attempt was wide of the post. They should have taken the lead in the 14th minute when Goddard again turned supplier to Hugo Boumous courtesy of some sloppy goalkeeping by Debjit Majumder. But the Frenchman’s shot blazed over the bar. Indian Super League 2020–21 Points Table Updated: Mumbai City FC Restore Five-Point Lead at Top With 1–0 Win Over SC East Bengal.

East Bengal were beginning to fashion chances of their own — Jacques Maghoma had an attempt go just wide — but their enthusiasm was dampened when Mumbai finally broke through in the 27th minute. Goddard, again, put in a good delivery into the box which was well defended by East Bengal. However, Boumous once again put the ball into the box and this time, he was able to find an unmarked Fall, who made no mistake.

Mumbai found another chance to score as the first half drew to a close. A cross found Le Fondre unmarked inside the box. The Englishman had a free header but was unable to get it on target. Fall had the chance to get his second soon after the restart but failed to make the most of it. A chip from Ahmed Jahouh saw him with a clear shot on goal, but his attempt was straight into Majumder’s hands.

East Bengal coach Robbie Fowler threw in Bright Enobakhare around the hour-mark and his presence immediately invigorated their attack. East Bengal went close to getting the equaliser in the 64th minute when Daniel Fox headed inches wide from a corner.

Fowler’s team piled on the pressure in the final quarter of the game and there were times when Mumbai struggled to get the ball out of their own half. East Bengal froze possession creating chances every minute but Mumbai goalkeeper Amrinder Singh stood firm, ably assisted by a backline.

Perhaps, the best chance for the Kolkata side came with just minutes left on the clock when substitute Aaron Joshua Holloway floated in a beautiful cross to find Harmanpreet Singh at the far post. The forward was unmarked and should have netted but his header went narrowly over. East Bengal pushed till the final minute, but the equaliser was never to come.

(The above story first appeared on Reportr Door on Jan 23, 2021 12:14 AM IST. For more news and updates on politics, world, sports, entertainment and lifestyle, log on to our website reportrdoor.com).