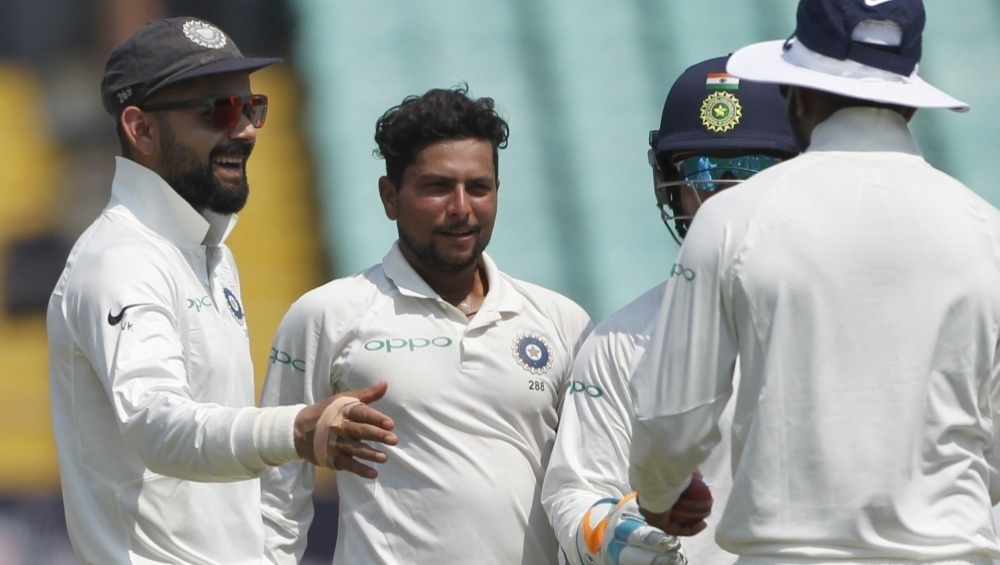 New Delhi, January 23: The Indian team management is likely to field Chinaman bowler Kuldeep Yadav in the forthcoming four-Test series against England in February-March. The left-arm spinner was not played in the four-Test series in Australia even as India tried as many as 20 players due to injuries.

Incidentally, the last Test Kuldeep played was during the previous tour of Australia in 2018-19. He played in Sydney in 2019 and picked five wickets. Altogether he has played six Tests. On the recently-concluded Australia tour, he played just one ODI and a warm-up game.

“It was tough for you. You didn’t play a game here but your attitude was really good. We are going to India now, your time will come. So keep working hard,” India vice-captain Ajinkya Rahane said in a video posted on the BCCI website on Saturday. Rohit Sharma Records: Ahead of India vs England Test Series 2021, Let’s Look at How Hitman has Fared in Home Tests.

India bowling coach Bharat Arun too said that Kuldeep would be played in India. He added that the team didn’t play him in Australia as they went with the horses-for-courses policy.

“That’s okay (if he didn’t get to play). I think he is working hard enough. He has been excellent. I think horses-for-courses is the policy we use. And mind you, when Kuldeep gets a chance to play, he will show what he can do, because I think he is bowling magnificently now [at nets]. And in India, when we play these four Test matches, that will be his time,” said Arun.

“Every time Kuldeep has played for India, he has done exceptionally well. The only chance he got in the T20 game, he bowled a fantastic spell. Every player in this team knows that when his chance comes, it will be of great importance to the team,” added Arun.

(The above story first appeared on Reportr Door on Jan 23, 2021 08:48 PM IST. For more news and updates on politics, world, sports, entertainment and lifestyle, log on to our website reportrdoor.com).

ALA vs RM Dream11 Prediction in La Liga 2020–21: Tips to Pick Best Team for Alaves vs Real Madrid Football Match
AC Milan vs Atalanta Live Streaming Online & Match Time in IST: How to Get Free Live Telecast of Serie A 2020–21 on TV & Football Score Updates in India?
Comment