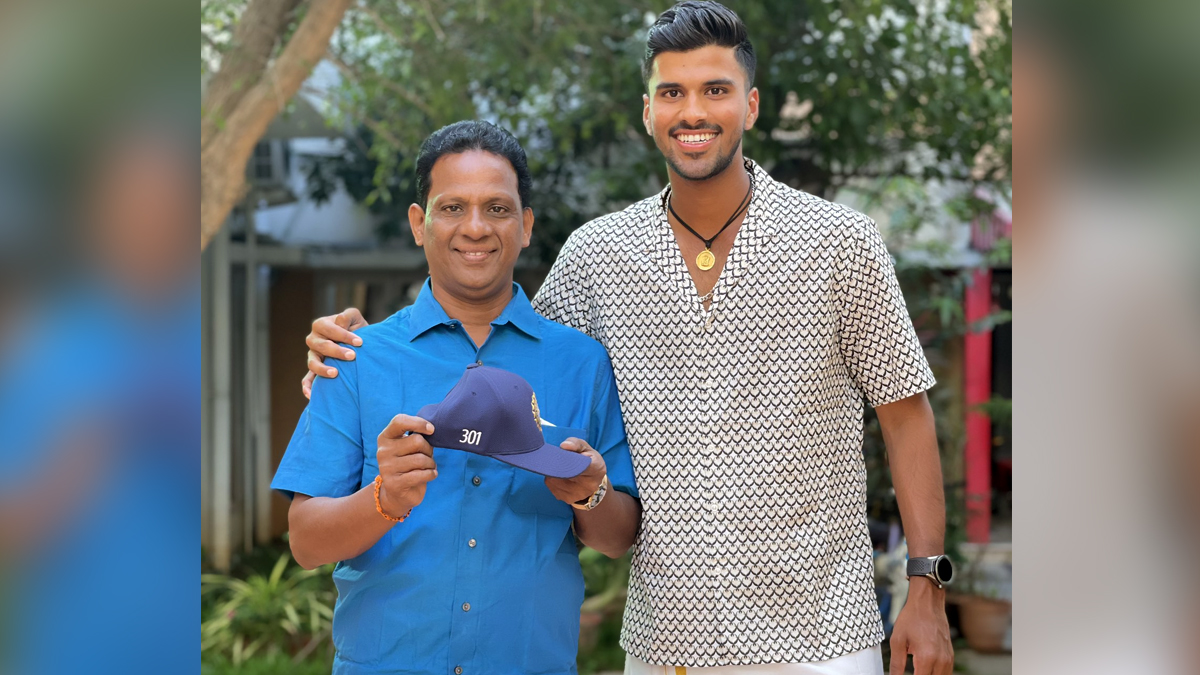 Sundar had made his Test debut against Australia in the fourth Test at Gabba, Brisbane and as a result, he became the 301st cricketer to play for India in the longest format. Anand Mahindra Announces Thar SUV As Gifts for Mohammad Siraj, T Natarajan, Shardul Thakur, Washington Sundar, Shubman Gill and Navdeep Saini.

The all-rounder shared a picture on Twitter, in which he is seen standing alongside his father. Sundar’s father was seen flaunting the ‘301’ number Test cap.

Sundar interestingly shares his Test cap number with the telephone area code of Maryland, a portion of the Greater Washington DC. Washington Sundar Gets Prized Scalp of Steve Smith As His First Test Wicket After Rohit Sharma Takes a Stunning Catch.

Sundar’s father M Sundar, a former Ranji probable, had a godfather named PD Washington, who lived just two streets away from his home. He was an avid follower of cricket and had developed a fondness for M Sundar’s game. Realising that he was not financially secure, the retired army officer used to buy him uniforms, pay his school fees, and often used to drop him to the ground in his cycle.

In an unfortunate turn of events, PD passed away in 1999. Shortly thereafter, Sundar’s first son was born. In memory of his late godfather PD Washington, M Sundar decided to name his son after him. In his debut Test, Sundar had registered scores of 62 and 22. He also went on to take four wickets in the match, including a three-wicket haul in the first innings.

On Tuesday, Australia’s fortress — The Gabba — was finally breached. It took 32 years and two months, but the unthinkable was achieved as an injury-ravaged young Indian team beat Australia by three wickets against all odds in the final Test to take the series 2-1.

Virat Kohli had also returned home after the first Test as he along with his wife Anushka Sharma were expecting the birth of their first child. Kohli announced that they had been blessed with a baby girl on the very day when the Indian team played out of its skin to draw the third Test at the Sydney Cricket Ground.

In the first Test against Australia, India was bundled out for 36 and there were many pundits who said the visiting team will face a 4-0 drubbing. But proving every critic wrong, the Ajinkya Rahane-led side registered famous victories in Melbourne and Brisbane. The side also recorded an epic draw in Sydney and at every step, the line-up overcame adversity.