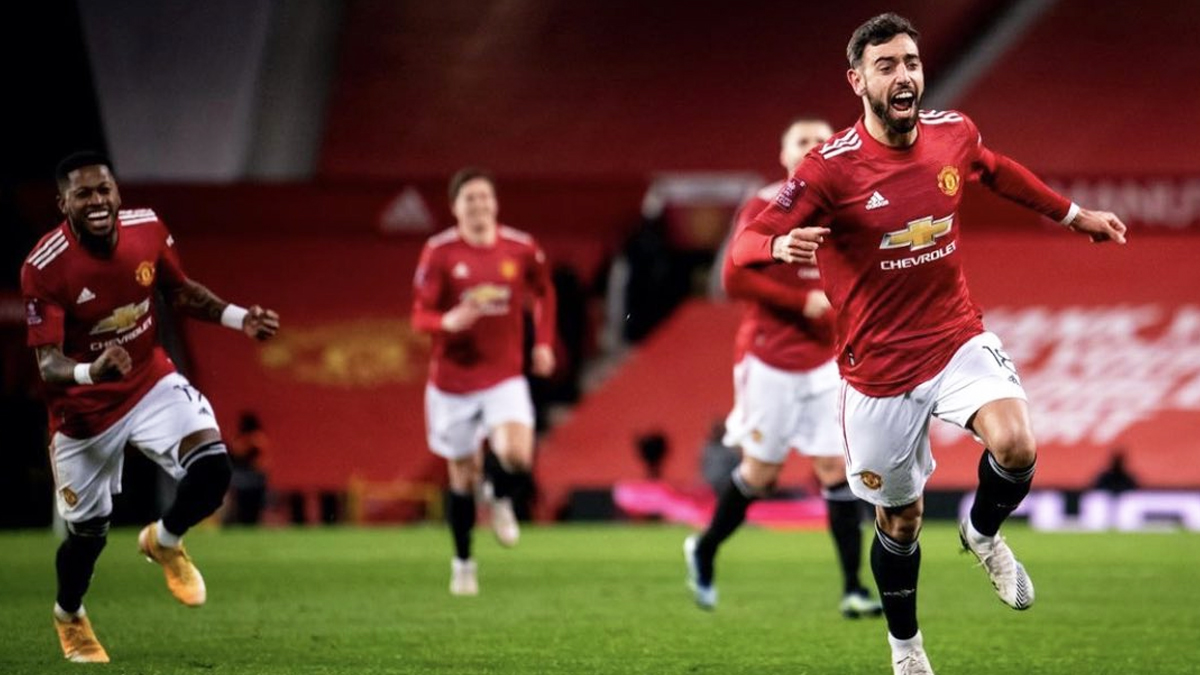 Bruno Fernandes scored a stunner from a free-kick just outside the box as Manchester United beat Liverpool 3-2 in the FA Cup 2020-21 fourth-round clash at Old Trafford on Sunday. Fernandes came on as a substitute post the hour mark and scored from a delightful set-piece 12 minutes later to take United into the next round and crash the league champions out. Twitter erupted in joy as Ole Gunnar Solskjaer recorded his first win as a manager over Liverpool and Jurgen Klopp in six meetings. Cristiano Ronaldo Reacts After Juventus Beat Bologna 2-0 to Close Gap on Serie A 2020-21 Leaders AC Milan.

Mohamed Salah had put Liverpool ahead in the 18th minute from a wonderful through ball from Roberto Firmino that cut between Victor Lindelof and laid on nicely for the Egyptian to chip above on a rushing Dean Henderson. But United parried back just eight minutes later. Marcus Rashford found Mason Greenwood with a cross at the far post on the counter and the youngster finished it off with precision.

United went ahead when Rhys Williams failed to clear a ball putting Rashford through on goal and the latter calmly slotted it past goalkeeper Alisson Becker to put the home team ahead.

But once again Salah was at hand 10 minutes later to equalise for Liverpool after a surging run from James Milner cut open the United defence. But Fernandes would eventually score the goal that mattered 20 minutes later to put United through. Manchester United fans rejoiced at beating the league champions. Take a look at some reactions.

Running to the Next Round

Running to the next round 💪🏼 #FAcup #MUFC @ManUtd pic.twitter.com/LOSkZzvp8E

He can’t even look at him in the face 😂🔴💪 #MUFC pic.twitter.com/atLUxfCiY6

Liverpool Fans After Losing Against United

FT 3-2 Manchester United March on & the scousers are out ha love it, a great game both teams we’re all in, feels even better to knock them out! #FACup #MUNLIV #mufc pic.twitter.com/Vu3onONuoL

The Red Devils will next play West Ham in the FA Cup fifth-round. They have now extended their unbeaten run across all competitions to five matches and host Sheffield United at home in the Premier League in their next match.

(The above story first appeared on Reportr Door on Jan 25, 2021 09:02 AM IST. For more news and updates on politics, world, sports, entertainment and lifestyle, log on to our website reportrdoor.com).