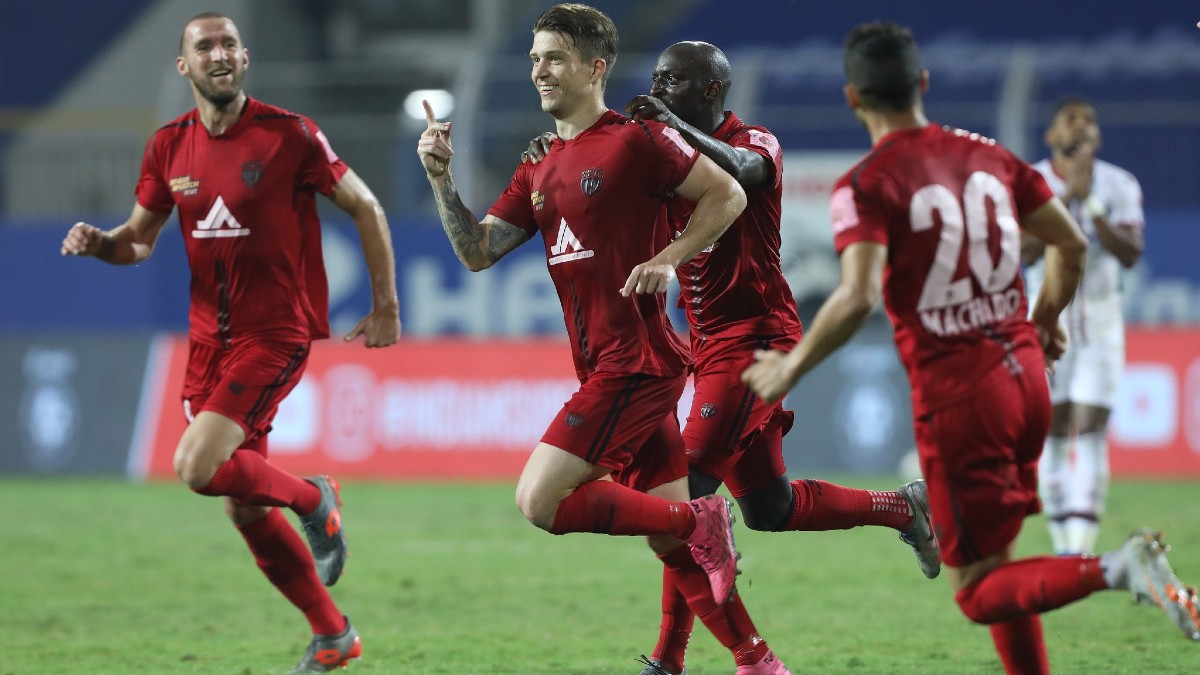 Panaji, January 26: A fulfilling outing for Federico Gallego highlighted with an assist and a spectacular goal helped NorthEast United defeat ATK Mohun Bagan 2-1 in the Indian Super League (ISL) at the Fatorda Stadium on Tuesday.

Gallego had a part to play in Luis Machado’s opener (60′) before Roy Krishna (72′) equalised for the Mariners. Gallego’s 81st-minute curler settled things for NorthEast. The first half was a cagey affair, illustrated by the fact that both teams had only one shot on target each at the end of it.

NorthEast stuck to defending their area and did not have too many completed passes in the opposition half. Bagan had their first chance in as early as the eighth minute. Krishna found Javi Hernandez through a cut-back but the midfielder’s shot was wide. Indian Super League 2020–21 Points Table Updated: ATK Mohun Bagan Lose Ground on Leaders Mumbai City After 2-1 Defeat Against NorthEast United.

It was ATKMB who kept more of the ball and looked the more threatening throughout the first half, but that was not to say that NorthEast did not have their chances. Just after the half-hour-mark, Bagan keeper Arindam Bhattacharya was forced to make a save after Machado received the ball from Gallego and took a shot.

The Mariners nearly went ahead at the stroke of halftime as David Williams, after getting the ball from Hernandez, tried to find the onrushing Prabir Das, who missed it by inches.

The opening goal when it came arrived in controversial circumstances. ATKMB defender Tiri gave away the ball cheaply as it bounced off Gallego and ran loose behind the defence. Tiri found himself in a race with Machado to get to the ball first.

The Spaniard, though, took a tumble under pressure from Machado and the linesman’s flag went straight up. Referee Crystal John, however, did not stop play and Machado duly slotted it past Arindam. Despite vigorous protests by Bagan, John allowed the goal after consulting the linesman.

NorthEast nearly doubled their lead soon when Gallego curled in a wonderful cross across the face of the goal. Mashoor Shereef was able to get on the end of it, but his looped header struck the post and bounced back into the play.

However, the lead lasted just over ten minutes as a low ball from Carl McHugh outside the box found Krishna unmarked at the far post. The Fijian was never going to miss a simple tap in. ISL 2020-21 Full Schedule For Free PDF Download Online: Time Table With Date & Match Time In IST, Venue Details, Fixtures of Indian Super League 7.

After the goal, it looked like ATKMB would go on to find the winner, but Gallego had other plans. With just under ten minutes left, the Uruguayan curled one from outside the box and it went in after bouncing off the upright.

There was a late penalty call for Bagan after Krishna went down in the box under pressure from NEUFC keeper Subhasish Roy, but the referee awarded a goal-kick.