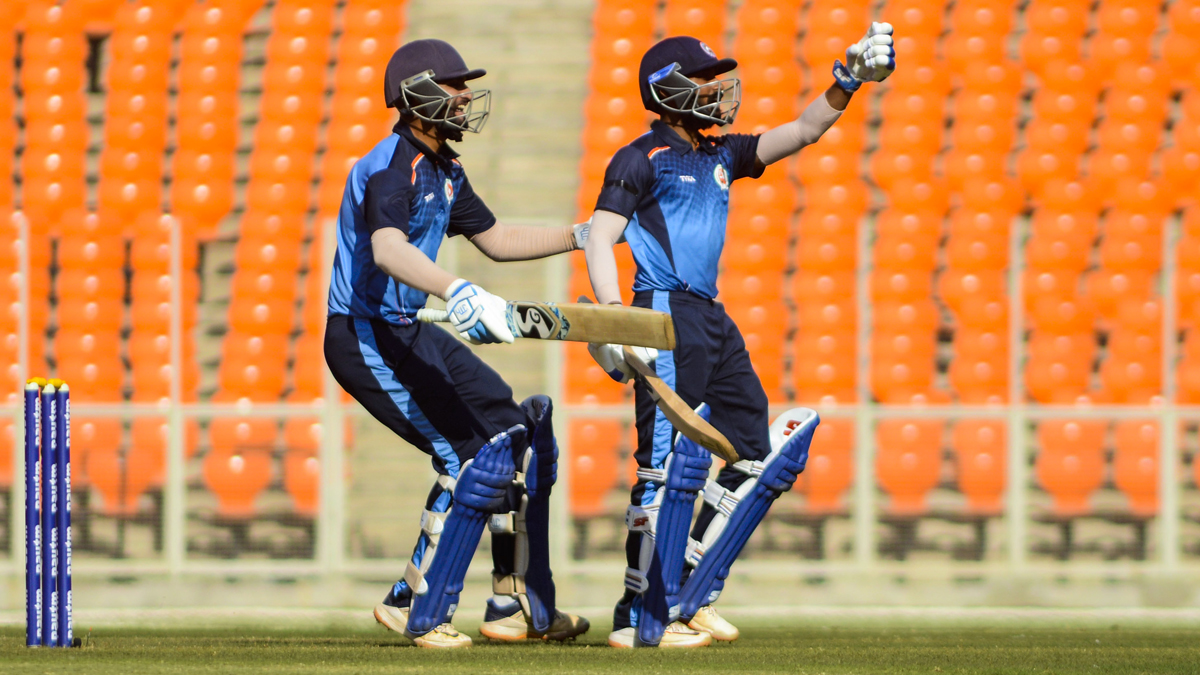 Vishnu Solanki did an MS Dhoni as Baroda defeated Haryana by eight wickets in the quarter-final clash of the Syed Mushtaq Ali Trophy 2021, advancing to the semi-finals. Chasing 149 at the Sardar Patel Stadium in Ahmedabad, Baroda needed five runs off to the last ball to pull off the heist. While the bowler Sumit Kumar went for a yorker, Vishnu Solanki played MS Dhoni’s trademark hit helicopter shot to send the ball over the boundary ropes. Players of both teams couldn’t believe what happen as Solanki defied all the odds. Syed Mushtaq Ali Trophy 2021: Eight Teams Undergo COVID-19 Tests, Ready for Knockout Stage.

arlier in the match, Baroda skipper Kedar Devdhar opted to bowl first after winning the toss. With regular captain Krunal Pandya out of the fixture, Baroda were under the pump. However, they bowled well to restrict Haryana to 148-7. Chasing the tricky total, openers Devdhar and Smit Patel got off to a decent start, but the scoring rate was always on the lower side. Spin twins Yuzvendra Chahal and Jayant Yadav were getting purchase from the track. However, Solanki had other ideas as he played a sensational knock. With the help of five sixes and four boundaries, he scored 71 off 46 balls to take his side over the line. Meanwhile, let’s look at how the 28-year-old finished off the game.

A helicopter six to win it.

“A magnificent hit!” screams the commentator.

Baroda will now lock horns with in-form Punjab in the second semi-final on January 29 in Ahmedabad. The Mandeep Singh-led Punjab side have been on a roll this season and will take the field as firm favourites.  While the likes of Mandeep Singh and Simran Singh have done well in the batting department, Sandeep Sharma, Arshdeep Singh and Siddhart Kaul have done a brilliant job in the bowling department. Hence, an exciting contest is on the cards.

(The above story first appeared on Reportr Door on Jan 27, 2021 05:39 PM IST. For more news and updates on politics, world, sports, entertainment and lifestyle, log on to our website reportrdoor.com).