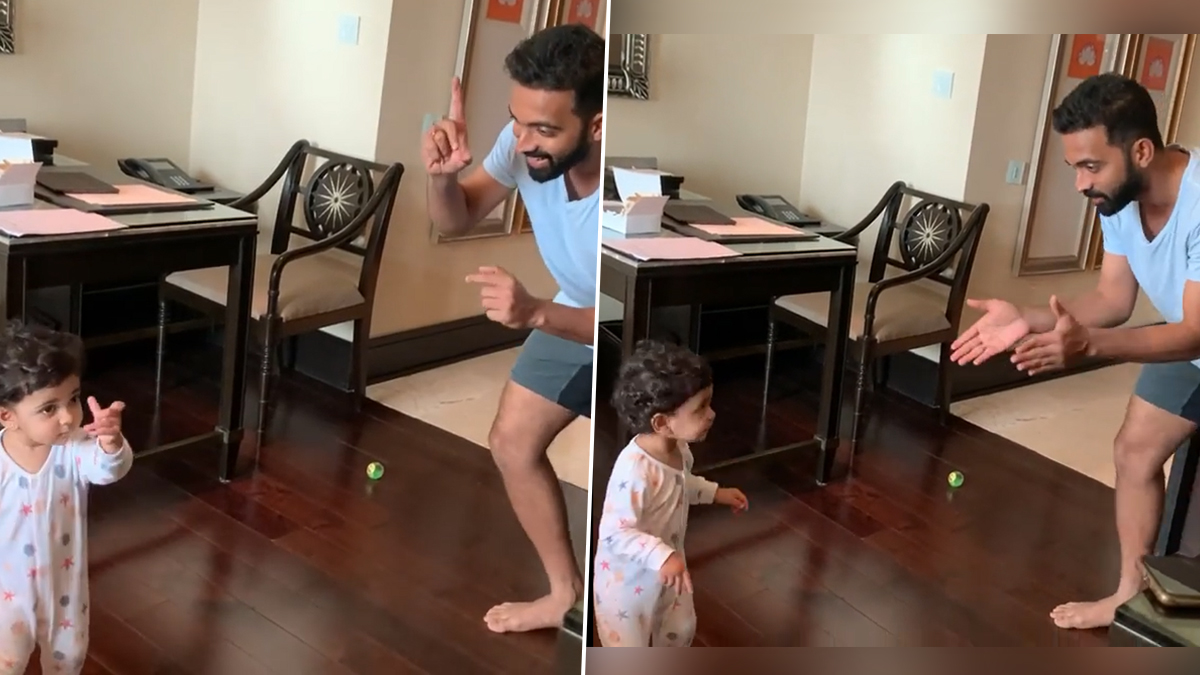 International cricket is set to return India after the COVID-19 halt as Virat Kohli’s men are hosting England in a full-fledged series comprising four Tests, five T20Is and three ODI matches. Ahead of the first Test at the MA Chidambaram Stadium in Chennai, all players have been put in six-day quarantine period amid the global health scare. While staying in isolation would be challenging for some players, India’s Test vice-captain Ajinkya Rahane spent a gala time with his daughter. In a video shared by Rahane’s wife Radhika, the father-daughter duo was seen dancing inside the hotel room. The clip was nothing short of adorable as the comment section got flooded in no time. Ajinkya Rahane Deliver Emotional Speech After India’s Historic Test Series Victory Over Australia.

“My entertainment in quarantine #Day1,” Radhika wrote while sharing the video on Instagram. Rahane’s confidence must be on cloud nine as he recently India to a historic 2-1 Test series triumph in Australia. With regular skipper Virat Kohli returning back home after the first Test and many key players sustaining injuries during the series, all the odds were against Rahane. However, the 32-year-old marshalled his troop brilliantly as Tim Paine’s men faced humiliation at their own den. Meanwhile, let’s look at how the right-handed batsman Day 1 of his quarantine in Chennai. India vs England 2021 Schedule, Free PDF Download.

Stakes are incredibly high in the series, and Virat Kohli and Co have a chance to consolidate the top spot in ICC World Test Championship points table. At the same time, they can also displace New Zealand at the top of Test team rankings. On the other hand, the Three Lions need nothing short of an emphatic win to secure a place in the World Test Championship finals. Notably, India haven’t lost a home Test series since 2012.

(The above story first appeared on Reportr Door on Jan 28, 2021 12:48 PM IST. For more news and updates on politics, world, sports, entertainment and lifestyle, log on to our website reportrdoor.com).