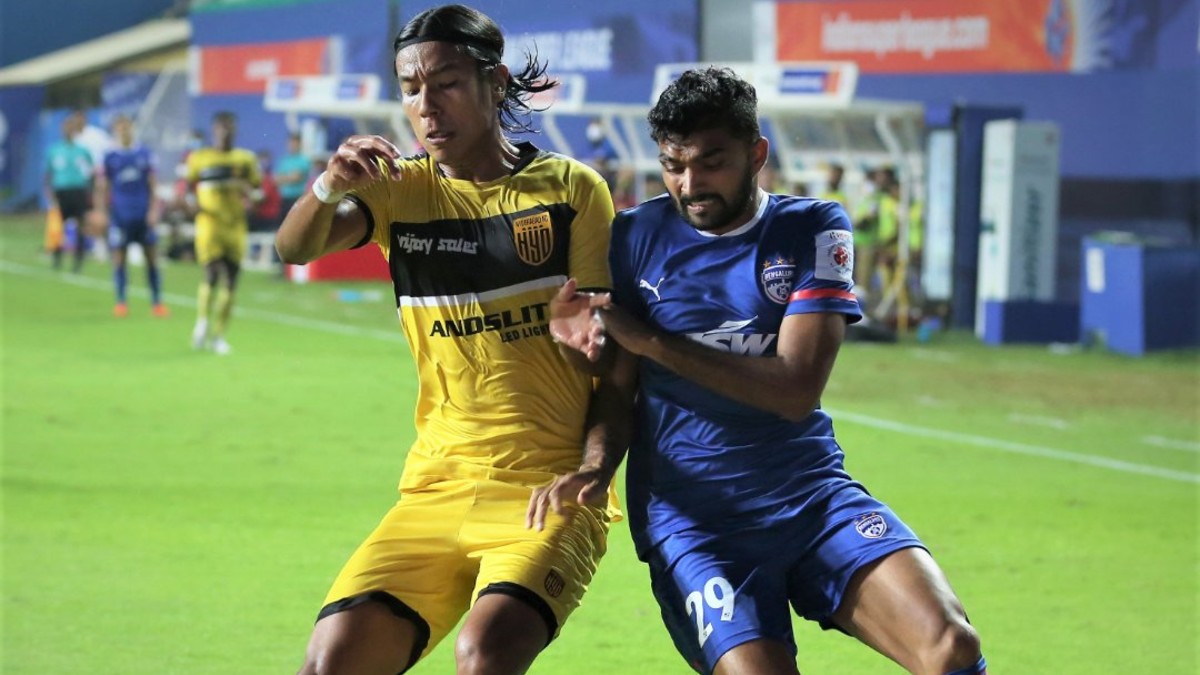 Vasco, January 28: Two late goals in a span of five minutes broke Bengaluru FC hearts as Hyderabad FC came from behind in dramatic fashion to draw 2-2 in an Indian Super League match here on Thursday. BFC led 2-0 through goals from Sunil Chhetri (9th) and Leon Augustine (61st). However, Aridane Santana pulled one back in the 86th minute before Fran Sandaza scored a 90th-minute equaliser, as BFC’s winless run extended to eight games.

Interim coach Naushad Moosa handed a first start to Leon Augustine while Harmanjot Khabra returned to the starting XI for Bengaluru. For Hyderabad, Manuel Marquez started with Liston Colaco and Joao Victor. Bengaluru suffered an early blow and were forced to make an early substitution after Juanan pulled his hamstring in the fifth minute. The Spaniard was replaced by Parag Srivas.

Soon, Moosa’s side got their noses in front from yet another set-piece. Cleiton Silva whipped in a precise delivery into the box. Chhetri lost his marker and jumped above the rest to find the back of the net. Cristiano Ronaldo Reacts As Juventus Beat SPAL 4-0 to Qualify for Coppa Italia Semi-Finals.

Hyderabad were doing everything right except in the final third. Akash Mishra executed a one-two pass with Halicharan Narzary and the left-back crossed into the box, but none of his teammates could get on the end of it. The remainder of the half saw both sides miss a couple of chances.

Liston used his trickery and quick pace to get into the final third, but an excellent Rahul Bheke stood tall to avert any danger as Moosa’s side walked into the breather with a slender 1-0 lead. Hyderabad were much livelier after the restart. The Nizams pressurised the opponents, winning a corner.

However, Santana couldn’t keep his composure, directing Hitesh Sharma’s corner into the frame. Santana had another chance soon, but was thwarted by Bengaluru keeper Gurpreet Singh Sandhu. Then, a defensive lapse saw the Nizams fall further behind in the game. Hitesh Sharma misplaced a pass and Augustine darted into the box and shot with the outside of his right foot to beat the onrushing Laxmikant Kattimani.

Hyderabad, who dominated the evening in terms of possession and passing, finally pulled a goal back in the 86th minute from a counter-attack.

Rohit Danu, on getting the ball on the right flank, sent in a brilliant cross into the box. The ball took a slight touch of Srivas and reached Santana, who tapped in past the BFC keeper. Tottenham Hotspur vs Liverpool, Premier League 2020–21 Free Live Streaming Online & Match Time in India: How to Watch EPL Match Live Telecast on TV & Football Score Updates in IST?.

With just a few minutes left, Hyderabad went all out and had their reward. Roland Alberg miscued a shot from outside the box, which fell to Sandaza. The Spaniard took a touch before smashing past Gurpreet for the equaliser.