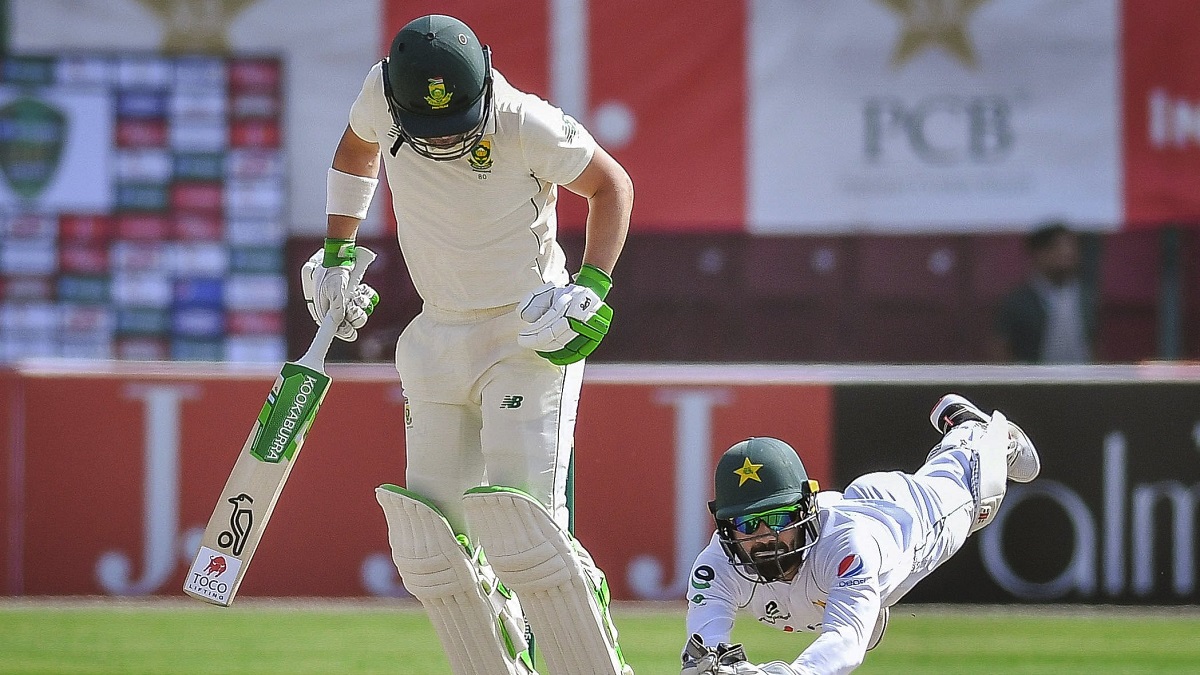 Karachi, January 28: South Africa batsmen Aiden Markram and Rassie van der Dussen showed grit and determination to hit 74 and 64 respectively, but the three wickets in the final half-hour gave Pakistan the edge on day three of the first Test at the National Stadium on Thursday.

At stumps on day three, Proteas’ score read 187/4 and the side has a lead of 29 runs. Keshav Maharaj and Quinton de Kock were unbeaten on 2 and 0 respectively. After conceding a lead of 158, Proteas would have been hoping for the batsmen to show some grit, and that is what exactly happened as the top-order was in no mood to give in. Kagiso Rabada Becomes Fourth Youngest Bowler to Take 200 Test Wickets, Achieves Feat During Pakistan vs South Africa 1st Test 2021.

However, the final half-an-hour brought about a change in the fortunes of Pakistan as the hosts managed to pick three quick wickets — Markram, van der Dussen, and Faf du Plessis (10) — to come right back into the game.

Resuming their second innings with a deficit of 158, Proteas openers Markram and Dean Elgar provided a steady start to the side as the duo put on 37 runs, ensuring that the visitors did not lose any wicket before the lunch break. At the interval, Markram and Elgar were batting on 16 and 18 respectively.

However, the break worked in Pakistan’s favour as Yasir Shah provided the hosts with the breakthrough of Elgar (29) and the Proteas’ opening stand of 48 runs came to an end. Dussen then joined Markram in the middle and the duo ensured that the side did not suffer more hiccups before the tea break and at the interval, Proteas’ score read 84/1, still trailing the hosts by 74 runs.

In the final session of the day, both Dussen and Markram increased the pace of their scoring and this threw Pakistan bowlers off the radar for a while. Both batsmen kept the bowlers at bay, and Pakistan was left searching for answers. However, just on the cusp of stumps on day three, Shah dismissed Dussen (64), ending the second-wicket partnership of 127 runs.

Soon after, Faf du Plessis (10) was trapped in front of the wickets by Shah, and Markram was sent back to the pavilion by Nauman Ali, and as a result, Proteas were four down before stumps.

Proteas management decided to send nightwatchman Keshav Maharaj and he along with skipper Quinton de Kock ensured that the visitors did not lose further wickets before the close of play.