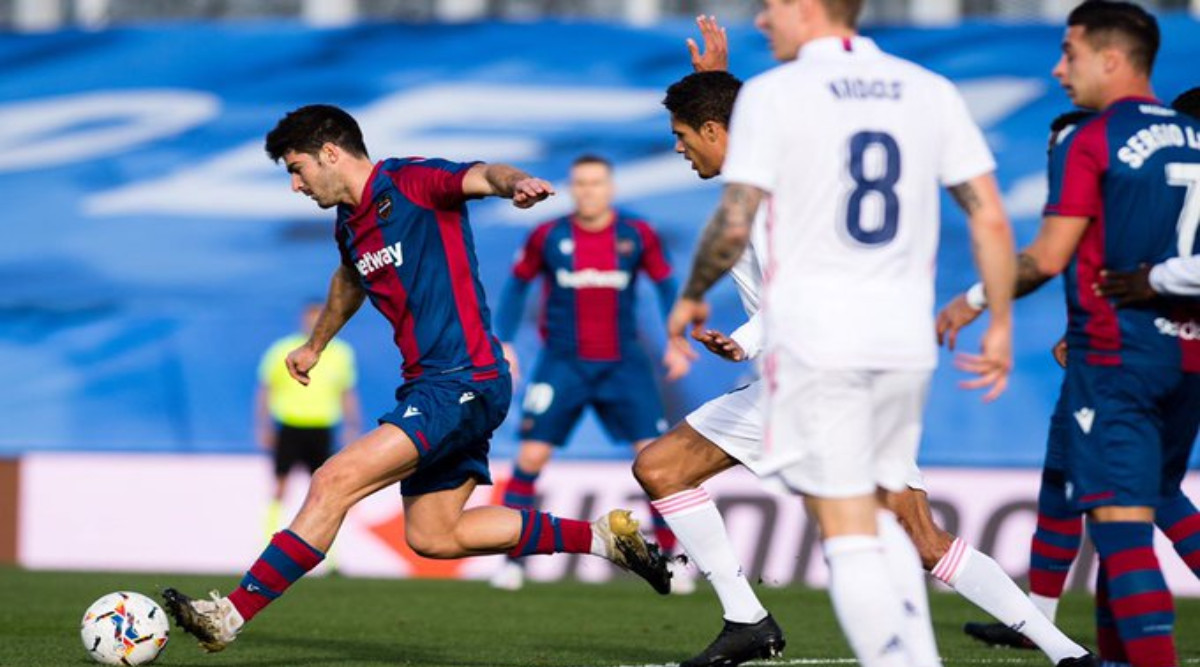 Barcelona, Jan 31: Thibaut Courtois’ impressive penalty save was not enough to keep an error-prone Real Madrid from stumbling again in its Spanish league title defense.

Madrid lost 2-1 at home to Levante on Saturday in a match that the defending champions played with 10 men from the eighth minute when defender Éder Militão was sent off. With the score level at 1-1 in the second half, Courtois stopped Roger Martí’s penalty.

The loud smack that the impact of the ball made when Courtois repelled it with one hand could be heard across Madrid’s Alfredo di Stéfano Stadium, which like all stadiums in Spain is devoid of fans due to the COVID-19 pandemic.

But Courtois could not deny Martí in the 78th when the forward received a pass after a smart team move executed after a corner kick and rifled the ball home.

“We got a red card in the eighth minute, that made it all much more complicated,” Courtois said.

“It was too bad to concede that goal from a corner. We have to keep fighting. The league goes until May, but (Atlético) keeps on winning.”

Militão, starting in place of the injured Sergio Ramos, left his side a man down when he fouled Sergio León from behind on a counterattack with only the goalkeeper to beat.

The referee initially awarded a yellow card but changed it for a red after consulting a video replay. Despite losing a player, Marco Asensio put Madrid ahead in the 13th when he was launched on a counterattack with Toni Kroos’ excellent pass. But Levante imposed its numerical advantage the rest of the way and enjoyed all the clear scoring chances.

Levante forward José Morales equalized in the 33rd with an exquisite volley to blast a pass from Jorge Miramón inside the far post. Tasked with boosting Madrid’s attack, substitute Vinícius Júnior instead fouled Charles Leclerc near the edge of the box in the 64th. That led to Marti’s spot kick saved by Courtois.

Madrid’s defense was caught off guard for Martí’s goal when the team allowed Levante to work an intricate set piece to set up his winner.

Assistant coach David Bettoni was in the dugout for a second straight match for Madrid as Zinedine Zidane continued his self-isolation after testing positive for COVID-19.

“It is a difficult loss. After the sending off, the game was uphill for us,” Bettoni said.

Madrid enjoyed a strong December when it reeled off five straight wins. But Zidane’s team has dropped points in three of its last five league matches in addition to losing to Athletic Bilbao in the Spanish Super Cup semifinals and being dumped from the Copa del Rey by third-tier Alcoyano.

Levante rose to ninth after just its second win on the road this season.

“It is never easy to play Madrid, even when they have 10,” Martí said.

“You have to play a complete game and work extremely hard. This will surely boost our confidence.”

Sevilla eased to a 2-0 win at Eibar to move ahead of Barcelona and into third place — one point behind Madrid.

Lucas Ocampos opened for the visitors in the 28th from the penalty spot after Pedro Bigas fouled Youssef En-Nesyri.

After Joan Jordán tapped in Sevilla’s second goal in the 55th, Eibar goalkeeper Marko Dmitrovic asked to be substituted and spent the rest of the match in the stands with his left leg propped up.

Barcelona trails Sevilla by two points before it hosts Athletic Bilbao on Sunday. Eibar was left in 15th place after just one win in 11 league games at its Ipurúa Stadium.

Aleksander Isak scored with almost the final kick of the game to snatch Real Sociedad a 1-1 draw at Villarreal.

Isak smashed a ball that fell to him near the edge of the area and sent it bouncing past goalkeeper Sergio Asenjo.

Dani Parejo had put Villarreal ahead in the third minute with a long-distance shot.

The stalemate between two of the better attacks in the league left Villarreal in fifth place and Sociedad in sixth.

Also, Valencia edged Elche 1-0 thanks a first-half header by Daniel Wass to end a five-game winless streak at home.