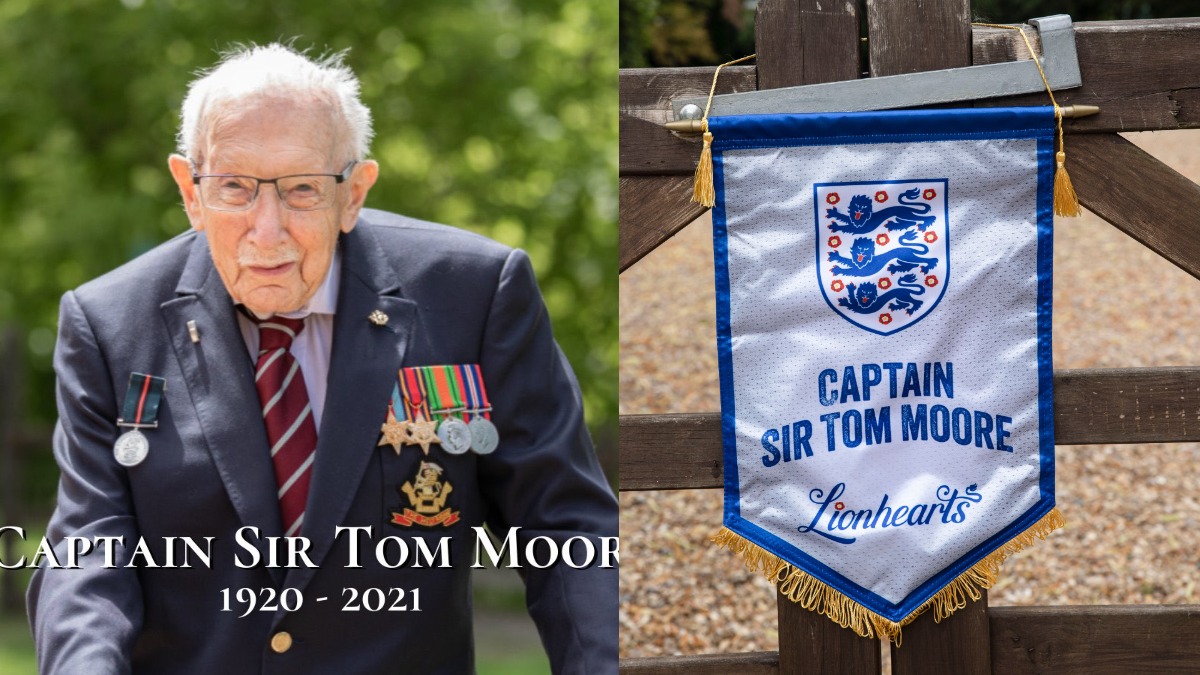 Captain Tom Moore, the World War II veteran, who lighted the hearts of people of Britain with his fundraising effort for the NHS workers, died after testing positive for coronavirus. He was 100. His family confirmed Moore’s death via a tweet on Tuesday (February 2). “It is with great sadness that we announce the death of our dear father, Captain Sir Tom Moore,” his daughters said in a statement. The World War Two veteran had raised millions for health service workers by walking 100 lengths of his garden during the lockdown last year in the early stages of the COVID-19 pandemic. Captain Sir Tom Moore Dies at 100, UK’s Lockdown Hero Was Hospitalised After Testing Positive for COVID-19.

Moore died at Bedford Hospital where he was admitted after testing COVID-19 positive on January 22. The family confirmed Moore was battling pneumonia and had also been receiving treatment for prostate and skin cancer. He was not vaccinated against COVID-19 as he was on medication for other illness.

Many from the sports fraternity, including former England cricket captain Michael Vaughan, reacted to the Captain Moore’s sad demise. Vaughan paid his condolences and offered support to the bereaved family. He was joined by many from the sports family. Take a look at their reactions.

A true national hero and treasure. An inspiration to us all, RIP. 🤍

RIP Sir Tom An Inspiration to Us All

An inspiration to us all ❤️ https://t.co/zbzOow8b86

We’re deeply saddened to learn of the passing of @captaintommoore.

We were honoured to welcome Captain Sir Tom as the leader of our #Lionhearts last year and know that what he achieved will continue to inspire so many.

All of our thoughts are with his family and friends. pic.twitter.com/0MHiXvj4Ip

Forever a hero and an inspiration to us all 💙 pic.twitter.com/YCWOc2VKP5

The thoughts of everyone connected with Watford FC are with his friends and family.

You were a true inspiration to us all. Thank you, Captain Sir Tom Moore 💙 https://t.co/JaHHWUzXU9

He had become an emblem of hope and inspiration after raising over 33 million pounds by pacing 100 laps around his garden every day. Moore has set out to raise 1,000 pounds for the National Health Care Service Workers, who battled on the frontline in the fight against COVID-19. But his quest was soon viral and drew attention from different corners of the world. Many across Britain, the United States and even Japan donated to his cause and helped raise 33 million pounds.

“The last year of our father’s life was nothing short of remarkable. He was rejuvenated and experienced things he’d only ever dreamed of,” his daughters was quoted as saying by news agency Reuters. “Whilst he’d been in so many hearts for just a short time, he was an incredible father and grandfather, and he will stay alive in our hearts forever.” Moore was knighted for his fundraising efforts by Queen Elizabeth II at a ceremony at Windsor castle.

(The above story first appeared on Reportr Door on Feb 02, 2021 10:40 PM IST. For more news and updates on politics, world, sports, entertainment and lifestyle, log on to our website reportrdoor.com).