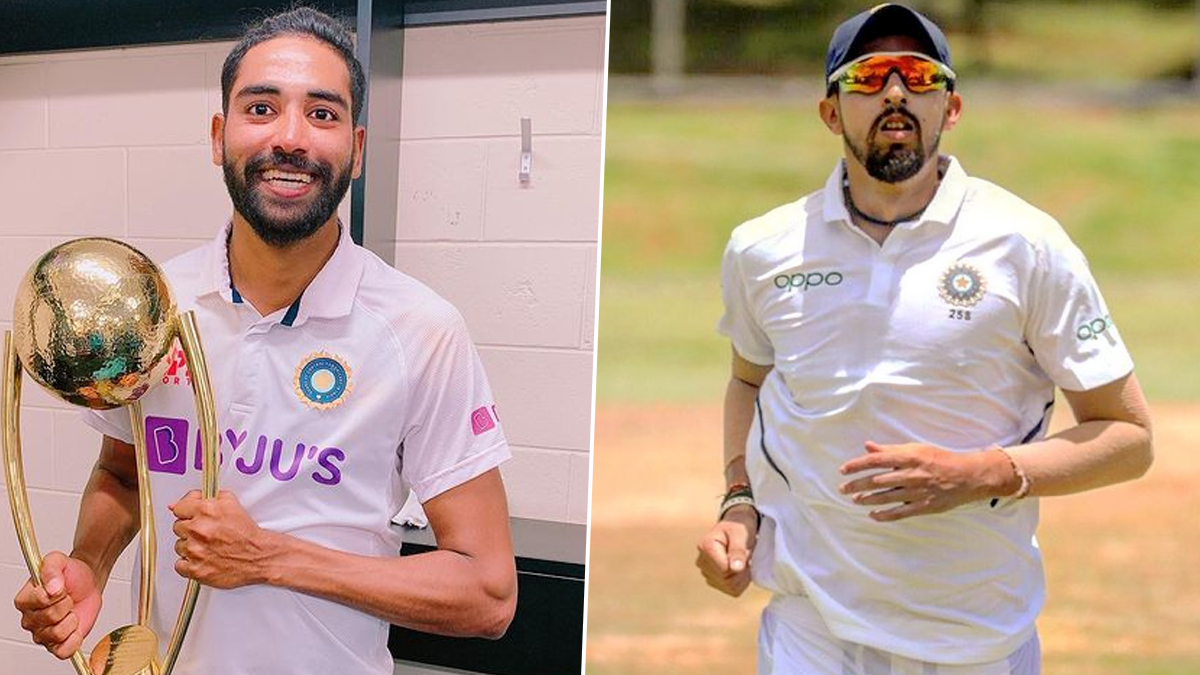 New Delhi, February 2: From not having enough options due to a plethora of injuries, the Indian team will have a different worry while selecting the playing XI for the opening Test against England, with old warhorse Ishant Sharma facing tough competition from newcomer Mohammed Siraj.

The Indian team had their first of the three available practice sessions on Tuesday and going by the traditional Chepauk wicket that normally assists the spinners, India might go with two pacers and three spinners for the February 5-9 opener. IND vs ENG 2021: A Look At James Anderson and Stuart Broad’s Bowling Record in Tests in India.

“The pitch is a typical Chepauk wicket. No English feel or anything. In this humidity, you need to have grass on the wicket so that it doesn’t break up that easily. This wicket will help spinners as it always has been the case,” a BCCI source, who is monitoring the developments, told PTI on the condition of anonymity.

All eyes will be on the troika of head coach Ravi Shastri, bowling coach Bharath and last but not the least, skipper Virat Kohli, to make a tough call on who would partner pace spearhead Jasprit Bumrah. Bumrah, who missed the last Test against Australia in Brisbane due to a groin strain, is fit and available to lead the pace attack.

However, there are questions about 32-year-old veteran Ishant being out of red ball cricket for nearly one year. On the other hand, Siraj is in red-hot form having picked 13 wickets in three Tests, including a five-wicket haul in Brisbane.

As far as Ishant is concerned, he has only recently made a comeback to competitive cricket, having played four Syed Mushtaq Ali trophy matches and bowled a total of 14.1 overs. It is expected that in the course of the next two days, bowling coach Arun will take a call after checking the two bowlers in question.

The second call could be a bit tougher as there is an in-form Washington Sundar and left-arm orthodox spinner Axar Patel, with senior off-break bowler Ravichandran Ashwin and left-arm wrist spinner Kuleep Yadav.

Washington is the man in form having hit a half century and taken four wickets on his debut, but his presence would mean two identical bowlers even though there is a vast difference in terms of quality.

Axar is also a very handy middle-order batsman apart from being a like-for-like replacement for Ravindran Jadeja. Hardik Pandya to start training from Wednesday

All-rounder Hardik Pandya’s quarantine will end on Wednesday morning and he will join the team training. Pandya, who is back in the Test team after a long hiatus, joined his colleagues a day late after attending to a personal matter.

While Pandya may not feature in the opener, he is expected to increase his bowling workload keeping the final of the World Test Championship and the five-match Test series in England in mind.