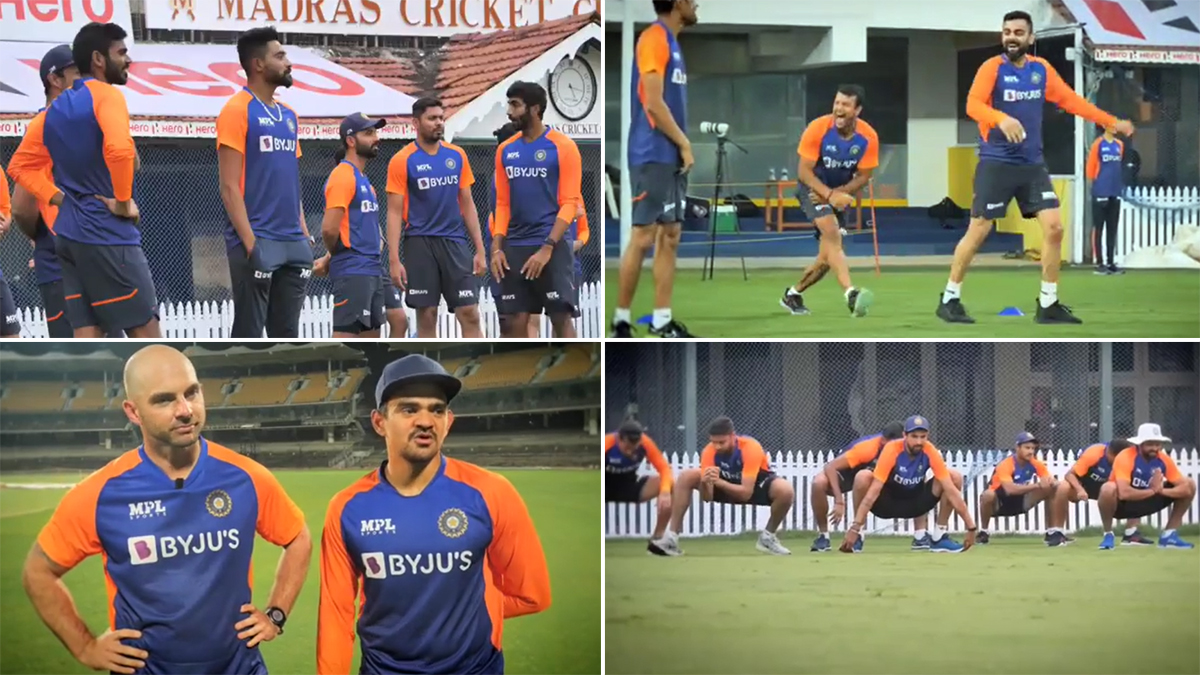 The Indian cricket team trained for the first time in Chennai ahead of the India vs England first Test from February 5. India completed their mandatory six-day quarantine and had to clear three round of COVID-19 tests before being allowed to train. On their first day at training, Indian cricketers played a light game of footvolley. Captain Virat Kohli, Ishant Sharma and Hardik Pandya were back among the squad and were seen training as were Rohit Sharma. The opening two Tests of the four-match series will be played at the Chepauk Stadium. Virat Kohli, Rohit Sharma, Ajinkya Rahane and Other Team India Players Sweat It Out in Training Session Ahead of 1st Test Against England in Chennai (View Pics).

The official Instagram page of the Indian cricket team shared a short video in which the Indian cricket team players can be seen playing footvolley. In the video, Kohli can be seen starting the game by kicking the ball in the air. Rishabh Pant was also seen going past Ravichandran Ashwin with a brilliant flick. “The plan was basically just to get the guys out. “They had been stuck in a room for six days,” said a trainer in the video. Take a look at the video. Virat Kohli, Ravi Shastri Address Team India Ahead of 1st Test Against England in Chennai (View Pics).

India and England are set to contrast in a four-match series which will be followed by the T20I and ODI leg of the tour. The first two Test matches of the series will be played at the MA Chidambaram Stadium in Chennai before the tour shifts to Ahmedabad where both teams will play the third Test — a pink ball encounter – at the recently renovated Motera Stadium.

The fourth Test as well as the five-match T20I series will also be played in Ahmedabad. The Maharashtra Cricket Stadium in Pune will play host for the three-match ODI series.

(The above story first appeared on Reportr Door on Feb 02, 2021 08:43 PM IST. For more news and updates on politics, world, sports, entertainment and lifestyle, log on to our website reportrdoor.com).