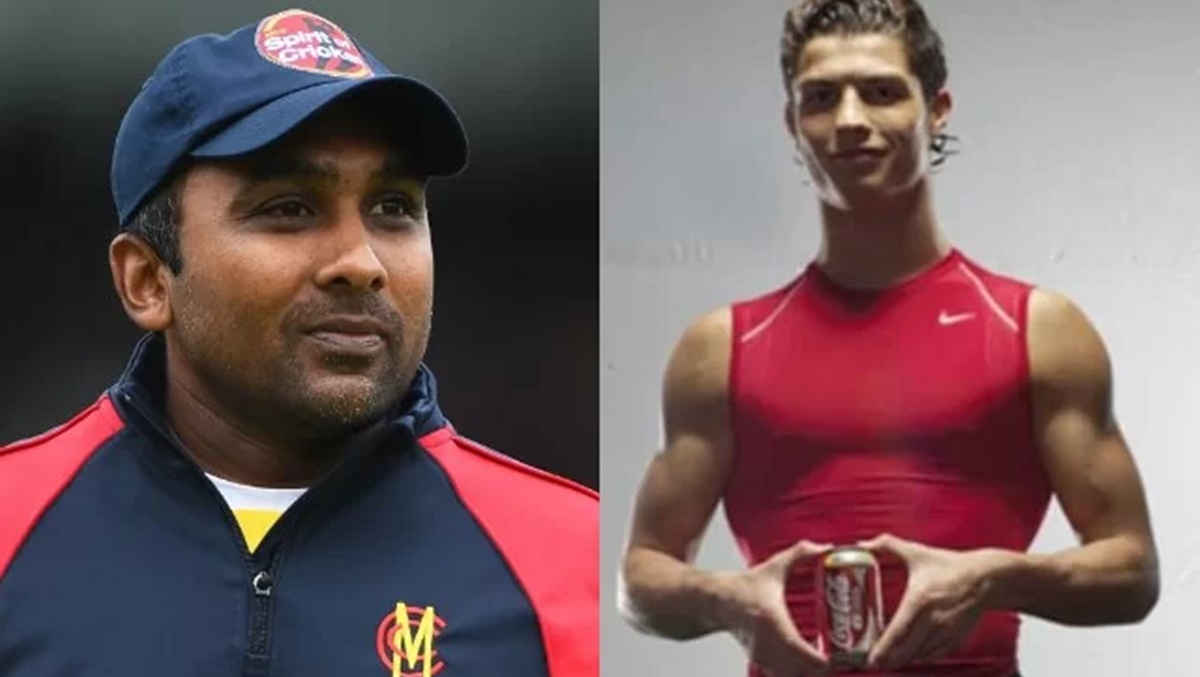 Cristiano Ronaldo’s off-the-field antics of getting rid of Coca-Cola during the press conference seem to have impressed many. Thus the netizens started comparing him to cricketers and celebrities who promote beverages. A netizen took a jibe at former Sri Lankan captain Mahela Jayawardena and Kumar Sangakkara who promote the brand for money. Now, this tweet surely did not go down well with Jayawardena and he responded to the post with a picture where the Portugal star is seen promoting Coca-Cola. Russian Football Coach Stanislav Cherchesov Takes a Cheeky Jibe At Cristiano Ronaldo, Sips Coca-Cola After Russia’s Win Over Finland in Euro 2020 (Watch Video).

While taking a jibe at Ronaldo and the fan, he wrote quite an interesting caption which read, “Oops!!! You did it again!! should do the skydive without the parachute next time.” A CR7 fan jumped in defence of Ronaldo and pointed out that the advertisement was done 16 years ago and people change over the years. The Sri Lankan cricketer had an interesting response to the same.

Check out the tweets below:

Oops!!! You did it again!! should do the sky dive with out the parachute next time 🤔 https://t.co/PGpMJ7irjd pic.twitter.com/1E6ec56qiS

As one may recall, Cristiano Ronaldo had removed the bottle of Coca-Cola lying right in front of him during the conference. This happened before Portugal’s opening game against Hungary. This act caused the beverage company to lose 4 billion dollars in a day and post this, even Manuel Locatelli had snubbed the beverage during a press conference.

(The above story first appeared on Reportr Door on Jun 19, 2021 10:14 AM IST. For more news and updates on politics, world, sports, entertainment and lifestyle, log on to our website reportrdoor.com).

LOR vs PAR Dream11 prediction: 3 players you can pick as captain or vice-captain for today’s Dhaka T20 match
WTC Final | R Sridhar hints at India not making a late change; says current XI can thrive in all conditions
Comment