Dustin Poirier understands that trilogy fights are special in their own way. When the dust gets settled inside the octagon after three grueling meetings, fighters are bound to share a special connection with each other.

Poirier, however, doesn’t visualize him developing that connection with Conor McGregor if the Irishman continues to be an as***le.

Dustin Poirier and Conor McGregor are set to face each other for the third time at UFC 264. With just over a week left until the event, the Louisiana native interacted with ESPN and revealed if he’ll bond with ‘The Notorious’ after the PPV.

‘The Diamond’ doesn’t completely rule out that possibility. The 32-year-old believes he and McGregor both climbed the ladder of success to feed their families and dealt with their setbacks successfully.

“I’m not sure. If he ever stops being an as***le probably. If he was just a real person, I’m sure we can talk about a lot of things and (we both) have a lot in common obviously. Fight to feed our families, and have overcome some stuff, and have our hands in businesses and stuff like that. But yeah, there’s something special about trilogies that the fans get behind and relationships get built,” said Dustin Poirier.

Conor McGregor was incredibly respectful to Dustin Poirier in the build-up to their highly-anticipated rematch at UFC 257. The Irishman praised Poirier for overcoming adversity and cementing his position at the top of the lightweight division.

Their face-off at the ceremonial weigh-ins was also far different from their first one. ‘The Diamond’ even gifted McGregor a bottle of Poirier’s Louisiana-style hot sauce. 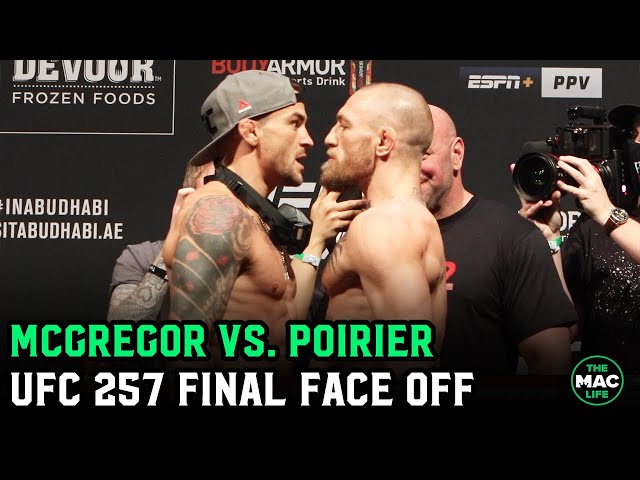 Ahead of their trilogy fight, though, things have started to get ugly between the two.

Conor McGregor took offense to Dustin Poirier accusing him of not following through with the promised donation to the Good Fight Foundation charity. The former two-division champ referred to his rival as a ‘pea head’ and also mocked him for his wrestling tactics.

As of now, it appears that their trilogy fight is going down the same road as their first meeting, with McGregor being brashy ahead of the clash.