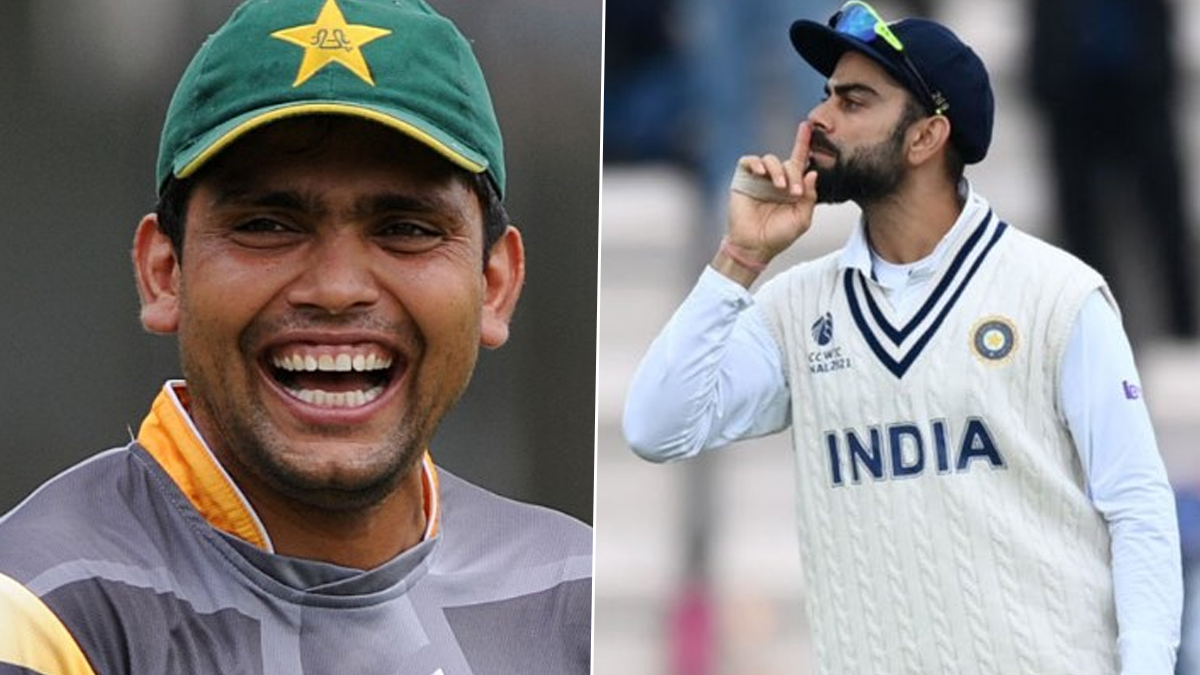 Former Pakistan wicket-keeper batsman Kamran Akmal has come out in support of Virat Kohli, after India failed to win the World Test Championship final against New Zealand few days ago. Kohli’s captaincy was brought into serious question after India’s loss to New Zealand, with many comparing his leadership skills to that of former skipper MS Dhoni. Akmal, while talking on a YouTube show named Hard Talk, said, “He is an amazing player, amazing captain, and no one can guarantee that if India changes the captain, they will win ICC tournaments. It is a matter of luck. It is easy to point fingers, especially for those who have no idea about cricket. People who have not even led a gully team are now giving Kohli and India advise to change their captain.” Instagram Richlist 2021: Cristiano Ronaldo, Dwayne Johnson Lead the List; Virat Kohli, Priyanka Chopra Jonas Top Earners Among Indian Celebs

The former Pakistan international also said that Kohli was India’s best captain after Dhoni. He also highlighted the fact that Kohli has scored 70 international hundred and averages over 50 across formats.

“Virat Kohli is the best captain after MS Dhoni. He has 70 centuries. He played in the 2017 ICC Champions Trophy and the 2019 ICC World Cup. Sure enough, India lost but what is his fault in it? India have remained the No. 1 Test for five years. Look at his achievement, his service… his captaincy is terrific. There is no doubt about it. He is an amazing player and the way he has prepared himself is phenomenal,” he added.

Akmal also recalled the time when he first saw Kohli during the first edition of the Indian Premier League. Akmal, playing for Rajasthan Royals, said that he wasn’t initially impressed with Kohli back then.

He said, “I had played the first edition of the IPL. At that time, I was so surprised when I saw Virat Kohli. I used to wonder what cricket he would play at such a young age. But he has changed himself totally now, and he has become a role model for youngsters.”

(The above story first appeared on Reportr Door on Jul 04, 2021 04:06 PM IST. For more news and updates on politics, world, sports, entertainment and lifestyle, log on to our website reportrdoor.com).