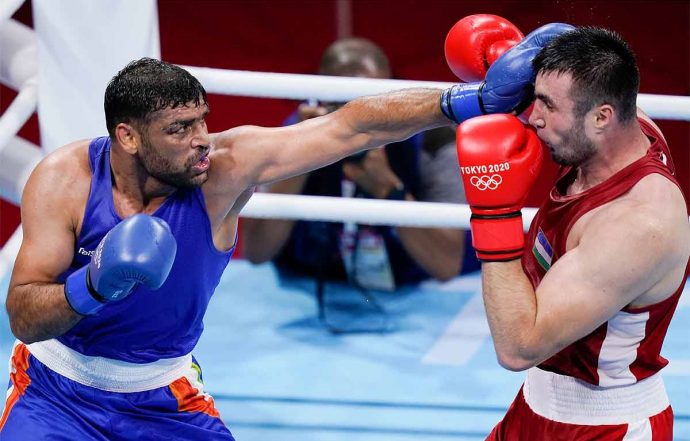 Indian boxer Satish Kumar did miss out on a chance of getting a medal but surely he has won many hearts as he took on Bakhodir Jalolav in the Quarterfinals of the Tokyo Olympics 2020. He fought in the men’s super heavyweight (+91kg) category. The Indian boxer continued to fight despite being injured. As one may recall he underwent seven stitches fighting against Ricardo Brown. But despite this, he preferred to fight. However, in the quarterfinals, he lost 5-0 to Jalolov. Needless to say, the netizens hailed him for putting up a great fight. 2020 Tokyo Olympics Live Updates Day 9.

Parth Jindal, who has been following the Tokyo Olympics 2020, was one of the first to laud Satish Kumar. Other netizens also posted a picture of his injury and hailed him for the fighting spirit. The Uzbekistani boxer scored 10 points throughout the three rounds and walked away with 30 points by the end of the game. The Indian boxer was given nine points in three rounds and by the end, he had 27 points.

Now, let’s have a look at the reactions below:

Fought hard, Satish Kumar. He was injured after the last round, decided to compete in the quarter-final against the world number 1 but the result was against him still he gives everything for #TeamIndia in #Boxing at the #Tokyo2020 #Olympics. pic.twitter.com/2LsAqUuBxl

Take a bow to Satish Kumar👏🙌. he is playing after getting injured.

No matter what the result be.. we always support you. @WeAreTeamIndia#Cheer4India #olmypics #SatishKumar #boxing #ind pic.twitter.com/cs0cG0pWva

Massive Respect For #SatishKumar For Finishing The Bout Despite Of Stitches & Cuts.

The Indian put up a brave fight, not just against the World No.1, but also his injuries.

Today on day 9, India doe not have many events. Later this evening we have PV Sindhu who will be playing the bronze medal game and the Indian hockey men’s team will lock horns with Great Britain in the quarterfinals.

(The above story first appeared on Reportr Door on Aug 01, 2021 11:17 AM IST. For more news and updates on politics, world, sports, entertainment and lifestyle, log on to our website reportrdoor.com).