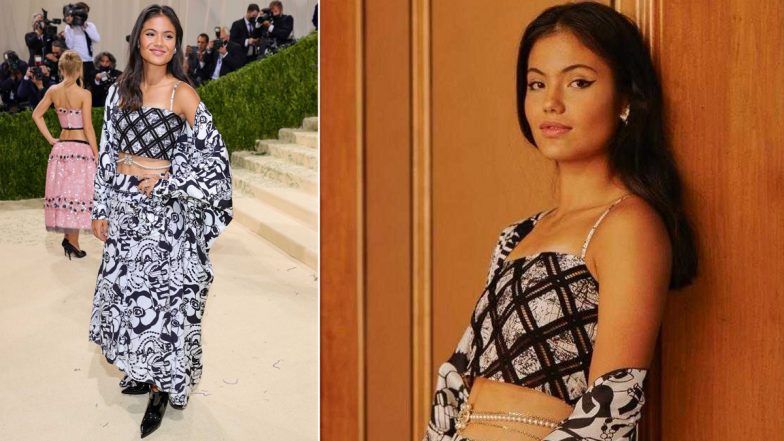 New York, Sep 15 : From being on the prime show of Good Morning America to wearing a Chanel attire for her first ever ‘Met Gala’ to being welcomed to the New York Stock Exchange with rounds of applause, teenage tennis ace Emma Raducanu of Great Britain is thoroughly enjoying her celebrity status while in New York after clinching the US Open women’s singles title on Sunday.

Raducanu, who defeated another teenager, Leylah Fernandez of Canada, in the final of the last Grand Slam of the year and jumped 127 spots in this week’s WTA Rankings to No.23, is seen sitting in the studio of “Good Morning America” talking confidently with celebrity hosts about her exploits at Flushing Meadows.

“If you just do the best you can with every single day time flies and you can really achieve anything with inner belief,” tweeted Good Morning America after the show. Emma Raducanu, US Open 2021 Champion Attends Met Gala in Chanel Ensemble, Leaves Everyone Impressed With Her Style Statement.

Following the interaction, the 19-year-old, whose father is Romanian and mother Chinese, tweeted, “Thanks for having me this morning, @GMA (star struck symbol).” A Raducanu fan tweeted, “Stick with BBC and Sky when you get home love. Congratulations you’re the new generations inspiration x.”

In a video posted by “Endeavor”, Raducanu is seen walking confidently in a black dress at the New York Stock Exchange to the sounds of cheers and claps. IMG Tennis posted a video of Raducanu trying out different dresses and finally settling for a Chanel gown. “@emmaraducanu X #MetGala The @usopen champ wore @CHANEL for her first ever #MetGala!” tweeted IMG Tennis. She is also seen trying out designer jewellery to go with her dress at the Met Gala. Irina Shayk Radiates Pure Grace a Met Gala 2021 With Her Ridiculously Stylish Moschino Gown! (View Pic).

US Open men’s champion, Daniil Medvedev of Russia who defeated Serbia’s world No. 1 Novak Djokovic in the final for his maiden major, twetted a picture of himself with Raducanu and wrote, “Imagine being 18, playing in your 4th pro event, winning only a 25k before and now being @usopen champ! Incredible. @EmmaRaducanu.”

Another Raducanu fan wrote, “Emma is a good role model for aspiring young athletes. It is amazing that the greatest female athletes are women, like Serena Williams and Venus Williams, Billie Jean King, Christie Everett and many others. Love it!”

(The above story first appeared on Reportr Door on Sep 15, 2021 11:35 AM IST. For more news and updates on politics, world, sports, entertainment and lifestyle, log on to our website reportrdoor.com).