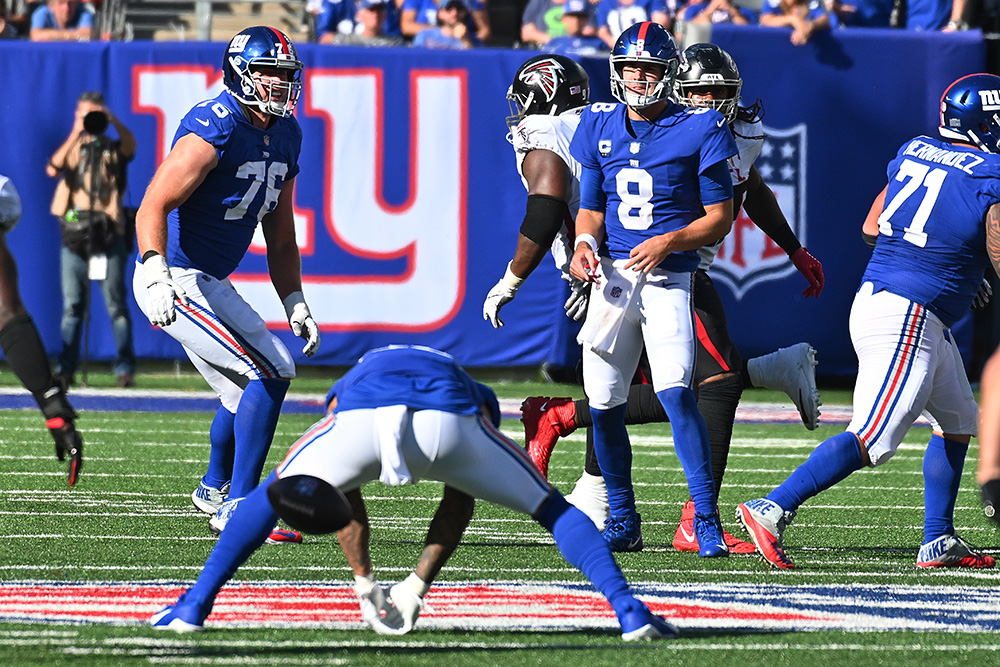 A day of booing the Giants from the top of the organization on down turned vicious at Evan Engram’s expense.

The 75,307 disgusted fans at MetLife Stadium twice cheered when Engram left the game Sunday during a 17-14 loss to the Falcons. Making his season debut after two games missed due to a calf injury, Engram lost a fumble in the second quarter and was the target of a tipped pass that fell at his feet on the Giants’ final drive in a tie game.

Boos turned to cheers when he headed to the sideline — and quarterback Daniel Jones “absolutely” felt bad for Engram.

“I don’t think that was deserved,” Jones said. “He went to get the ball. I could’ve thrown it better there at the end. He played hard all game and fought back from an injury a few weeks ago to be out here.”

The Giants have a boiling problem on their hands with the treatment of Engram, who somehow has become the on-field face of five years as the losingest team in the NFL. It’s an unusual spot for a tight end, but Engram is injury-prone, a first-round pick who hasn’t lived up to the potential he showed as a rookie, and one of only two players, along with Sterling Shepard, around for five straight 0-2 (or worse) starts.

Engram also has an inexplicable knack for being around turnovers, including as the target of interceptions. He led all NFL tight ends with eight drops last season despite making his first career Pro Bowl. His fumble Sunday stalled a two-minute drill when the Giants were trying to be aggressive.

“He knows how much we believe in him, how much I believe in him,” Jones said. “He’s a big-time playmaker for us. He’s made a ton of plays in the past, and I have no doubt he’ll continue that as we get going in the season.”

Engram has never said a disparaging word about the Giants nor the fans, nor has he landed in off-field trouble. He is popular with teammates and one of coach Joe Judge’s favorites because of his work ethic. Most professional athletes who have hopeless relationships with New York fans have a dirtier résumé.

The Giants are headed nowhere again this season. Engram is in the final year of his contract. And there could be a trade market if another team sees a buy-low chance to bank on a change of scenery.

Judge compared the boos of Engram to how he was booed for deciding to punt on a fourth down and then cheered when the ball was downed inside the 5-yard line. But that’s an apples-to-oranges comparison with the ongoing soured relationship from the fans toward Engram, who was also booed at the Giants’ lone open practice of training camp.

“It’s our job to entertain [the fans] and our job to please them,” Judge said. “We’re supposed to have emotion. That’s the reality of what we do. In terms of reacting to something externally, we need to focus on what we do each play and the process of being successful.”