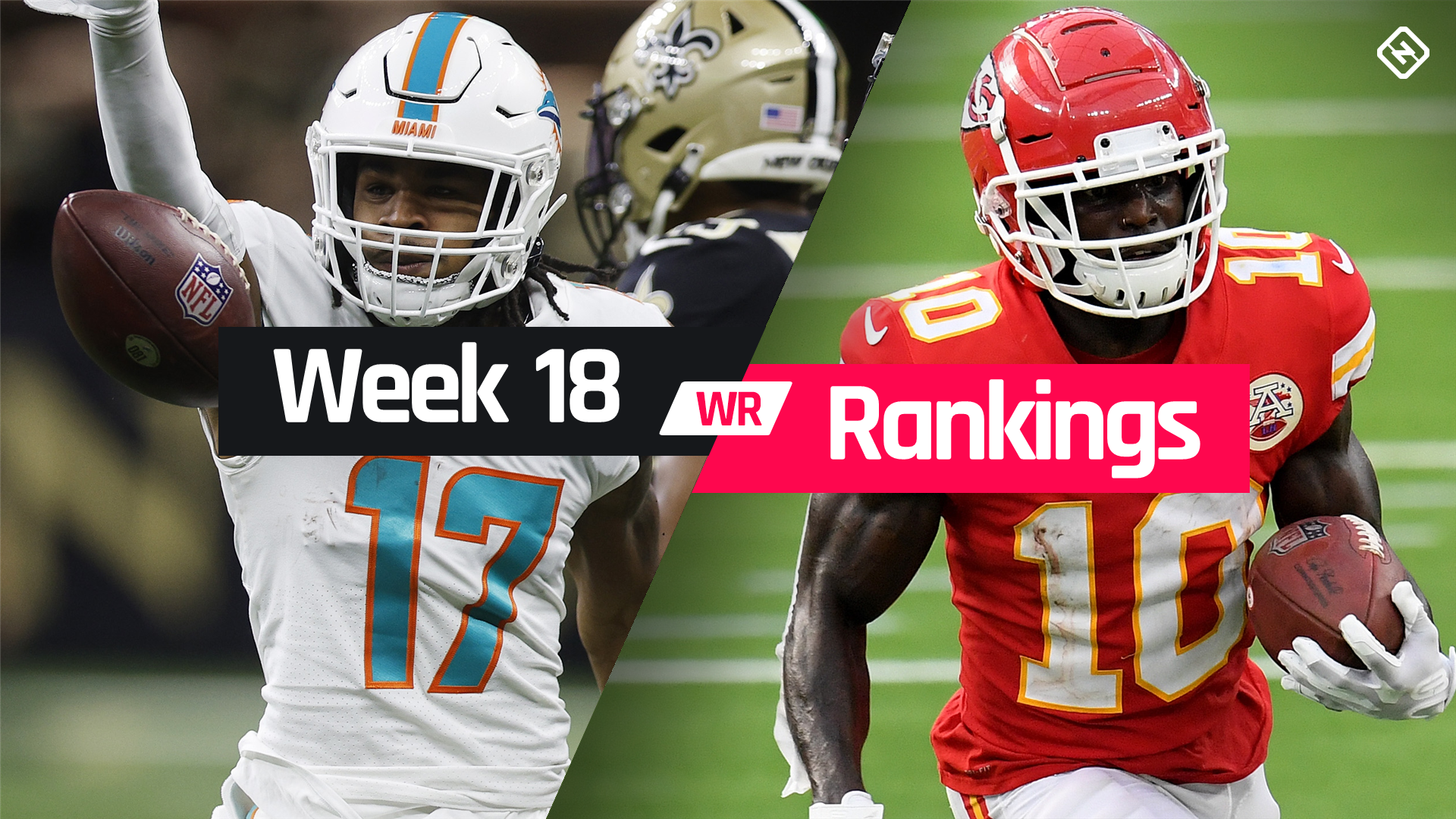 For most fantasy owners, the 2021 fantasy season has concluded, but there are a select few leagues still heading into battle in Week 18. Even though there will be plenty of NFL teams that have “nothing” to play for, our Week 18 fantasy WR rankings for standard and PPR leagues should still be the deepest set of all positions. If nothing else, you can use these to compare two players with similar price tags in DFS.

To go along with the fact some teams may be uninspired to play this week, we’ll likely have our usual slew of reserve/COVID list inactives, so this could be a tricky group to navigate. Most notably, Davante Adams could certainly be sidelined since the Packers have already clinched the No. 1 seed in the NFC, but we’re unsure about Marquez Valdez-Scantling and Allen Lazard. Aaron Rodgers should be inactive, though, so all Green Bay pass-catchers have low floors.

The studs with the toughest matchups include Jaylen Waddle (vs. Patriots), Amari Cooper (@ Eagles) and CeeDee Lamb (@ Eagles), Keenan Allen (@ Raiders), and Tyreek Hill (@ Broncos). So, overall, there are a decent number of guys in tough spots, but since their ceilings remain high in any matchups, each should still be in starting lineups. A guy like Waddle could bust in standard leagues, but he should have enough volume to produce in PPR.

Among players on the start-or-sit bubble, Darnell Mooney (@ Vikings), Marquez Callaway (@ Falcons), Van Jefferson (vs. 49ers),  Marquise Brown (vs. Steelers), Russell Gage (vs. Saints), Chase Claypool (@ Ravens), and Gabriel Davis (vs. Jets) make a lot of sense. The standard-leaning guys are Callaway, Claypool, Jefferson, and Davis, while the more attractive PPR plays are Mooney, Brown, and Gage. That said, they all have strong enough matchups to be considered in all formats.

You could also try riskier guys like Kenny Golladay (vs. Washington), K.J. Osborn (vs. Bears), Nico Collins (vs. Titans), and Tre’Quan Smith (@ Falcons), but they’re in a lower tier based on the risk factor and uncertainty we’ve seen from them this year. Emmanuel Sanders and Cole Beasley (vs. Jets) are fine plays, too, but they have lower ceilings than their teammate Davis, so the risk of a low floor makes them a risky choice that may not be worth it.

On the flip side, Elijah Moore and Braxton Berrios (@ Bills), DeVante Parker (vs. Patriots), Jerry Jeudy and Courtland Sutton (vs. Chiefs), Tyler Boyd (@ Browns), and secondary Tampa receivers (vs. Panthers) draw some of the toughest matchups for WRs. Of course, some of these guys have higher upsides than the players with good matchups, but the floor here is fairly low and none are constant producers in their offenses.

There are also guys like Josh Reynolds (vs. Packers) and Josh Palmer (@ Raiders) that have been productive in spots this year, but they have to be in the perfect situation, and when the matchup isn’t great, we can’t count on production.

The safest wideouts to play are those on teams who actually need to win this week for a playoff berth of playoff seeding. It can be tough to know what teams are going to do early in the week, but by Sunday, we should have more clarity on these situations. Some teams may not play any starters at all, there could be a bunch of guys we haven’t heard from all year who produce this week. It all stacks up to be a fun and interesting DFS slate but a tough one week for traditional leagues.

Note: We’ll be updating these WR rankings as needed throughout the week, so check back for the latest changes.

Rankings based on standard, non-PPR scoring

Rankings based on full-point PPR scoring