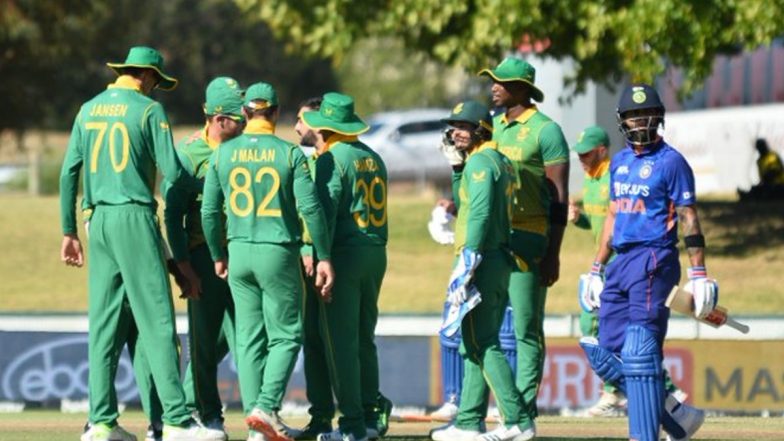 Paarl, January 19: Temba Bavuma and Rassie van der Dussen’s centuries were backed by a spirited bowling performance as South Africa defeated India by 31 runs in the first ODI of the three-match series here at Boland Park, Paarl on Wednesday. With this win, the hosts have gained a 1-0 lead in the three-match series. The second ODI will be played on the same ground on Friday.

Chasing 297, India got off to a steady start as openers Shikhar Dhawan and KL Rahul put on 46 runs but as soon as the Men in Blue started to gain an upper hand, Aiden Markram sent skipper Rahul (12) back to the pavilion and this brought Virat Kohli to the middle. After the first ten overs, India’s score read 55/1.

The left-handed Dhawan brought up his fifty in the 14th over of the innings, and he along with Kohli kept on moving the scoreboard briskly. At the halfway mark, India’s score read 137/1, with the visitors needing 160 more runs for the win with nine wickets in hand. South Africa got the much-needed wicket in the 26th over through Keshav Maharaj as he bowled Dhawan (79). SA Defeat IND To Take 1-0 Lead in Series.

Kohli (51) brought up his fifty but as soon as he reached the landmark, he was sent back to the pavilion by Tabraiz Shamsi. Soon after, Lungi Ngidi got the better of Shreyas Iyer (17) while Rishabh Pant was stumped off the bowling of Andile Phehlukwayo, reducing India to 182/5 in the 35th over, with the visitors still needing 115 runs for the win. Shardul Thakur (50*) tried his best but in the end, the task proved too much for the lower-order and South Africa registered a 31-run win.

Earlier, Rassie van der Dussen (129*) and Temba Bavuma (110) were the bright spots with the bat as South Africa posted 296/4. Bavuma and van der Dussen put on a stand of 204 runs for the fourth wicket and this is the second-highest by a South African pair in ODIs against India. Opting to bat first, South Africa got off to a bad start as the hosts lost opener Janneman Malan (6) in the fifth over of the innings. The batter was sent back to the pavilion by pacer Jasprit Bumrah and this brought skipper Temba Bavuma to the middle. After the first ten overs, the Proteas’ score read 39/1. IND vs SA 1st ODI 2022 Stat Highlights: Temba Bavuma & Rassie van der Dussen Lead Proteas to a 31-Run Win.

Indian bowlers were able to maintain a stranglehold over the Proteas batters and Bavuma and de Kock found the going tough in the middle. The 39-run stand for the second wicket came to an end in the 16th over as Ravichandran Ashwin bowled De Kock (27). Soon after, Venkatesh Iyer’s direct hit got the better of Aiden Markram (4) and Proteas were reduced to 68/3 in the 18th over.

Rassie van der Dussen then joined Bavuma in the middle and the duo revived Proteas’ innings by mixing caution with aggression. The partnership saw both batters going past their respective fifty-run mark. Bavuma brought up his ton in the 45th over while van der Dussen brought up the landmark in the 48th over of the innings. In the last five overs, the Proteas added 51 more runs to the total, taking the score past the 295-run mark.