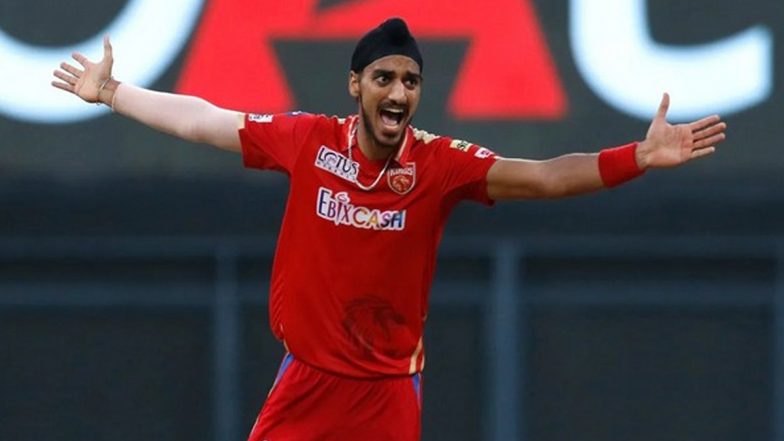 Mumbai (Maharashtra) [India], May 14 : Punjab Kings captain Mayank Agarwal hailed bowler Arshdeep Singh as the leader in the team. With brillinat economy of 6.80 in his four-over spell, Arshdeep helped Punjab Kings (PBKS) in their Indian Premier League (IPL) 2022 match to defeat the Royal Challengers Bangalore (RCB) by 54 runs on Friday at the Brabourne Stadium in Mumbai. After the match, skipper Mayank Agarwal while talking about Arshdeep said: “Very very energetic person, very confident guy (Arshdeep). Enjoys his cricket. Must say he’s the leader in the team. He rallies around everyone, takes up the responsibility, even goes up and speaks to the bowlers sometimes. Whirlwind knocks from Jonny Bairstow and Liam Livingstone guided PBKS to a mammoth total of 209 before they registered a comprehensive 54-run victory. IPL 2022: Liam Livingstone Says, ‘I Put in a Lot of Effort To Be Good in Powerplays and Death Overs’.

“We were brilliant with the bat. Wicket was holding up a bit. The way Jonny and Livi batted, was amazing. We haven’t changed a lot to be honest, just about understanding few situations, understanding the wicket,” PBKS captain said. “Have to be adaptable and flexible which we have been, which is nice. Can’t be too defensive with the ball. If batsman get going, it doesn’t matter, the boundaries don’t matter these days. Two points the most crucial thing for us. As long as the job gets done, I’m fine batting at five,” Mayank added. With this loss, RCB are at 14 points in 13 matches. They had only one match left against the top team of the tournament, Gujarat Titans, on May 19. PBKS currently have 12 points in 12 matches.