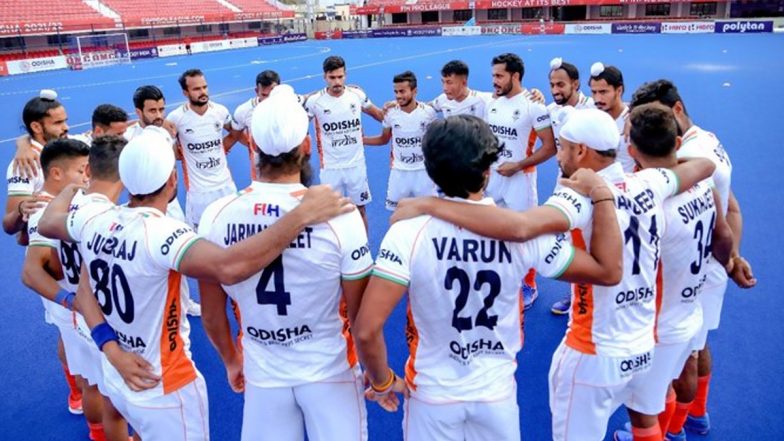 Rotterdam, June 19: Harmanpreet Singh converted a penalty corner in the final seconds of the match to help a resilient India fight back and hold the Netherlands to a 2-2 draw in the FIH Hockey Pro League. However, the hosts picked a bonus point from a 4-1 shootout win with their experienced goalkeeper Pirmin Blaak keeping the Indian attackers at bay. Neha Goyal Completes 100 International Caps, Hockey India Congratulate Midfielder.

Dilpreet Singh (22 min) had equalised for India after Reyenga Tijmen had given the Hetherlands the lead in the 10th minute. Bijen Koen in looked to have sealed the victory for the hosts as the clock wound down but Harmanpreet scored in the final seconds of the match played on Saturday.

In the shoot-out, the Netherlands scored among others via Bijen Koen, and Jonas De Geus while Harmanpreet Singh and Abhishek failed in their attempts for India. Vivek Sagar Prasad scored the only goal for India in the shoot-out.

The defeat in their penultimate matchof the league fetched India one point while the Netherlands jumped up to the top position in the table with the two points bagged in the shoot-out win. The two points took the Netherlands tally to 33 points, one point ahead of World and Olympic Champions Belgium (32). The Netherlands still have three more matches in hand and thus look in a good position to win the title. India are third in the standings with 30 points from 13 matches.

The Olympic bronze medallists will meet the Netherlands in their last league match on Sunday and will be hoping to win it and consolidate their position in the standings.

Earlier in the game, the Netherlands backed by a boisterous home crowd got off to a flying start creating two excellent shots on goal within two minutes of the start of the match. But luckily for India, both shots were off target.

Around the 5th minute, India launched an ambitious attack through Hardik Singh, who cut into the circle from the top, attempting to take a shot on goal but the Dutch goalie Pirmin Blaak cleared the ball.

It was, however, the Netherlands who fetched the first goal of the match when Derck de Vilder beat Indian defender Varun Kumar to find Tijmen Reyenga. With no defender near him, Reyenga (10th min) took his time to take a successful shot past experienced India custodian Sreejesh to take a 1-0 lead.

Only seconds later, India fought back with Mandeep Singh creating a fine opportunity with a tactically earned PC.

While Harmanpreet Singh’s first shot was blocked, and a retake was awarded, a goal by Mandeep Singh off a rebound from the drag-flick in the second attempt was disallowed by the umpire on account of dangerous play.

It continued to be an action-packed first quarter with India building on the intensity in their attack. This time, it was Abhishek challenging Blaak at the goal post, resulting in a PC but Jugraj Singh’s flick was well-defended well by Blaak.

With the Netherlands leading 1-0, Sreejesh’s inspired form was put to test once again in the second quarter when the hosts attacked the Indian post with back-to-back shots on goal through youngster Koen Bijen and Jorrit Croon, but an alert Sreejesh kept them at bay.

Meanwhile, Indian attackers broke the deadlock when a free-hit taken by Varun Kumar was cleverly passed to Dilpreet Singh, positioned perfectly inside the circle who just angled the deflection into the Netherlands’ post. With the scores levelled, India mounted pressure in the Dutch half but couldn’t score from it.

Seven minutes into the third quarter, Jasper Brinkman worked a good attack to help his team win a PC. But the drag-flick was well defended by Sreejesh.

A re-take awarded for dangerous play gave the hosts another chance at regaining the lead but a mix-up in the execution denied them a chance on goal. India too won a PC later in the third quarter through good stick work by Hardik but poor execution of the set-piece denied India a chance at taking the 2-1 lead.

With both teams tied at 1-1, the final quarter promised to be nail-biting with a fast-paced game being played out.

The Netherlands eventually managed to strike in the 47th minute when a good assist by Stejin van Heijningen was picked up well by Koen Bijen who beat defender Surender Kumar to score a splendid field goal for the Dutch, taking the scoreline to 2-1. India, not the team to give up till the final hooter, came up with some exciting play as they pushed the ante in their attack.

After some unsuccessful moves, and time quickly ticking away, Vivek Sagar Prasad created a much-needed chance for India with just two seconds left for the final hooter.

The PC was perfectly executed with Harmanpreet, the highest goal-scorer of the Pro League, scoring on the buzzer to take the match into the shootout.

(The above story first appeared on Reportr Door on Jun 19, 2022 10:29 AM IST. For more news and updates on politics, world, sports, entertainment and lifestyle, log on to our website reportrdoor.com).