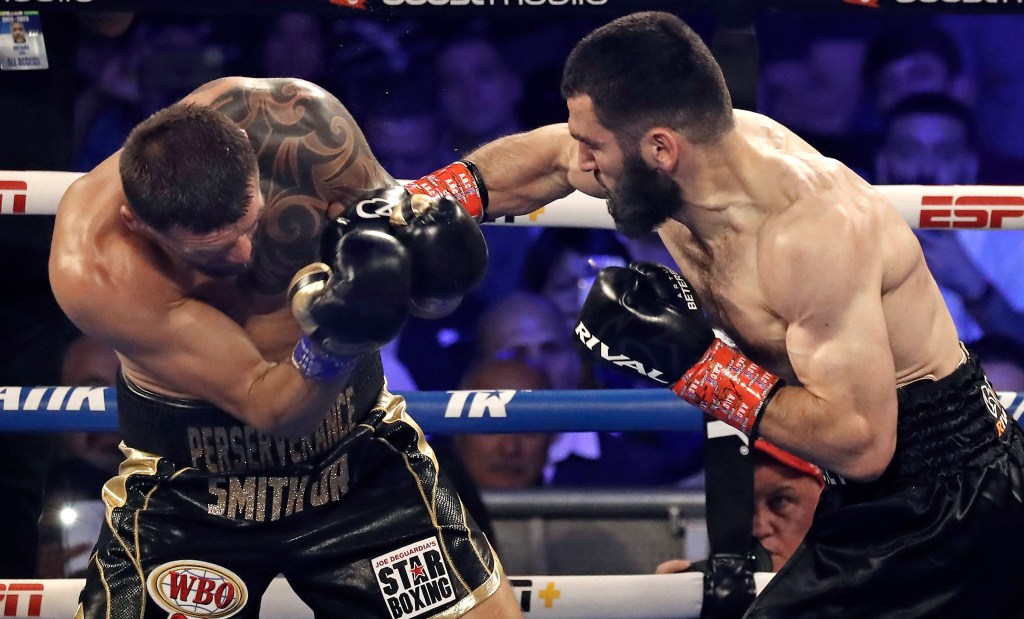 The unbeaten 37-year-old Canada-based Russian scored three knockdowns and had Smith in deep trouble with just under a minute remaining in round two before the fight was stopped.

Beterbiev improves to 18-0 – all by knockout – and can now set his sights on a possible unification fight against Russia’s WBA champion Dmitry Bivol for the undisputed light heavyweight crown.

“Joe is a little bit open, and it was more easy for me to get him,” Beterbiev said afterwards, before turning his attention to the prospect of a fight with Bivol.

“I prefer to unify. I want to be undisputed.”

Smith, a Long Island native, was reportedly taken to hospital immediately after the bout and did not speak to media. He fell to 28-4 after the fourth defeat of his career.

The 32-year-old American underdog, who also has 22 knockouts on his record, started aggressively but was quickly overwhelmed by his hard-hitting and skilful opponent.

Beterbiev had Smith wobbling in the first round, connecting with a series of overhand rights.

He had the American on the canvas early in what was ruled a slip rather than a knockdown.

But he did not have long to wait for the first legitimate knockdown of the contest, once again a clubbing overhand right forcing Smith to take a standing count at the end of the first.

After starting the second round in similar fashion, it was only a question of how long Smith would be able to cling on.

Beterbiev scored two more knockdowns early in the round, almost sending Smith through the ropes with a flurry of vicious shots.

He then uncorked a deadly combination of left uppercuts and a right to scramble Smith’s senses further, leaving referee Harvey Dock no option but to call it off.