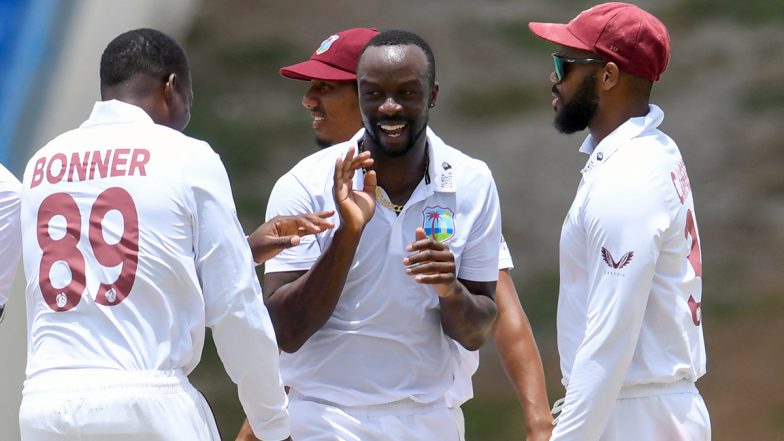 North Sound (Antigua), June 19: West Indies right-arm quick Kemar Roach lived up to his reputation as one of the best fast bowlers in the world as he grabbed his 10th five-wicket haul in Tests and a record 50th wicket at the Sir Vivian Richards Cricket Stadium, to put the hosts on the verge of victory in the opening Test against Bangladesh on Sunday (IST). How To Watch WI vs BAN 1st Test 2022 Live Streaming Online and Match Timings in India: Get West Indies vs Bangladesh Cricket Match Free TV Channel and Live Telecast Details.

With Bangladesh rallying on 232/6 in the final session on Day 3 after finding themselves in dire straits on 109/6 at one stage, Roach proved West Indies’ hero once again by taking three of the last four wickets to fall to send the innings tumbling to 245 all out. In doing so he joined the legendary Michael Holding at 249 wickets on the all-time West Indies list.

Roach finished with 5/53 — his fourth five-wicket haul against Bangladesh and third at the venue — and now finds himself on the brink of becoming only the sixth West Indies bowler to pass the 250-wicket landmark.

Drama marked the final hour, however, as West Indies, set 84 for victory, slumped to 9/3 before John Campbell struck an unbeaten 28 in a 40-run, unbroken fourth wicket stand with vice-captain Jermaine Blackwood (17 not out), to deny Bangladesh any further success.

The West Indies require a further 35 runs on the fourth day to wrap up the Test and take a 1-0 lead in the two-match series.

West Indies owed that position primarily to Roach and to fellow pacer Alzarri Joseph, who picked up 3/55 to follow up his 3/33 in the first innings, while deceptive seamer Kyle Mayers grabbed 2/30.

Wicketkeeper Nurul Hasan top-scored with 64 and captain Shakib-al-Hasan struck his second half-century of the game with 63 but other than for opener Mahmudul Hasan Joy’s 42, Bangladesh’s batsmen found scoring difficult.

“We’re obviously in a position to win. We always play matches to win,” Roach said after the day’s play.

“Right now with 35 runs away, once the guys get a good rest tonight, come back and be focused again, I think we’re in good stead to knock the runs off. Well done to the guys today to put ourselves in that position. I’m proud of myself. To build a career and get amongst the greats is always a good feeling.”

(The above story first appeared on Reportr Door on Jun 19, 2022 11:57 AM IST. For more news and updates on politics, world, sports, entertainment and lifestyle, log on to our website reportrdoor.com).