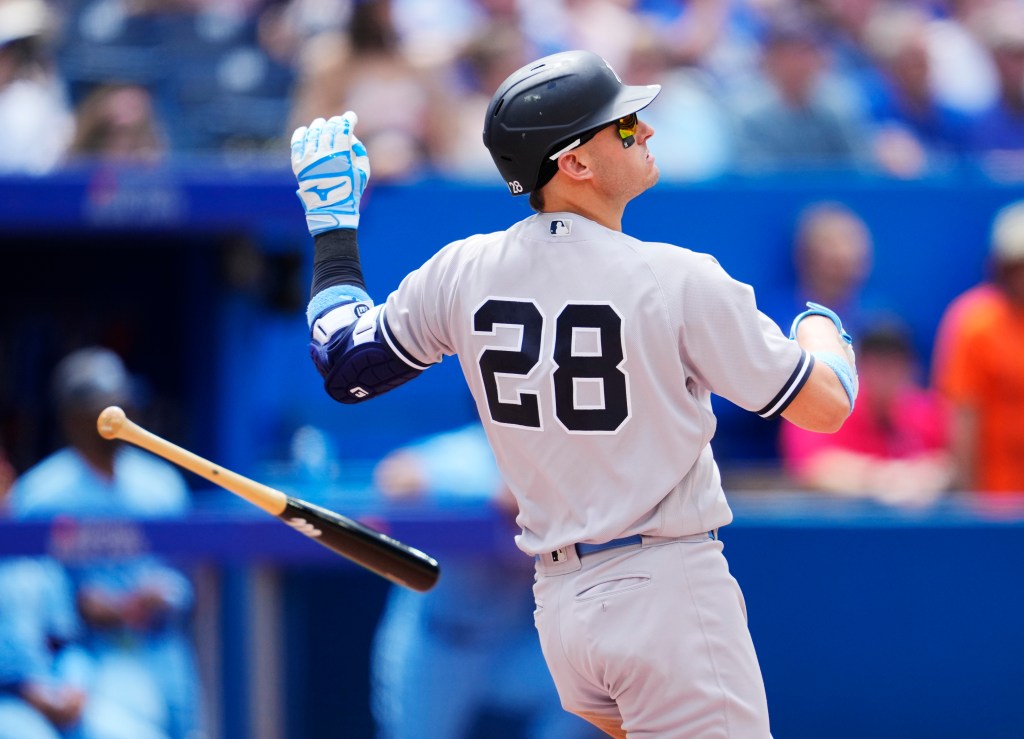 TORONTO — In what has been a historic start to their season, the Yankees got a dose of reality on Sunday.

After taking a five-run lead into the bottom of the sixth — looking like they were going to cruise to a 10th straight win — the Yankee bullpen imploded and the Blue Jays roared back to win, 10-9, at Rogers Centre.

It was just the Yankees’ second loss in their last 18 games.

And it came out of nowhere, as Miguel Castro and Wandy Peralta both gave up huge homers that altered the outcome.

A two-run shot by Josh Donaldson gave the Yankees the lead in the third and Aaron Judge and Gleyber Torres had run-scoring doubles in the fifth.

Back-to-back homers by light-hitting Kyle Higashioka and Marwin Gonzalez made it 8-3 in the top of the sixth and even though Luis Severino wasn’t at his best, the Yankees appeared to be well in control.

But the game began to unravel for them in the bottom of the inning, as the first two batters of the inning re ached to end Severino’s outing following a single by Vladimir Guerrero Jr. and a walk to Alejandro Kirk.

Miguel Castro got Teoscar Hernandez to hit into a force out and struck out Santiago Espinal, but walked Matt Chapman to load the bases.

Following a visit from pitching coach Matt Blake, Lourdes Gurriel Jr. gave the Blue Jays life with a grand slam to cut the Yankees’ lead to one.

Raimel Tapia followed with a double and Wandy Peralta came in to face Springer. Peralta got Springer to hit a foul pop-up near the first-base dugout, where LeMahieu made a nice play to finally end the inning.

With one on and one out, Peralta walked Kirk, drawing another visit from Blake — and again, the Blue Jays answered with a home run, as Teoscar Hernandez hit one out to center.

The three-run shot made it 10-8 to complete the improbable comeback.

Anthony Rizzo, pinch hitting for Higashioka with one out in the eighth, hit a solo homer off left-hander Tim Mayza that made it 10-9.

Jose Trevino then pinch hit for Joey Gallo — yes, you read that right — and walked.

Jordan Romano came in to face LeMahieu and got him to fly to right for the second out and then the right-hander struck out Aaron Judge on a 98 mph fastball to end the inning.

Romano got Donaldson looking to start the ninth before Giancarlo Stanton walked. Torres flied out and Aaron Hicks singled to right, sending Stanton to third.

With Rizzo at the plate, Hicks stole second before Rizzo fought back from 0-2 to get to a full count before grounding out to finish it.

The Yankees were looking for their ninth series sweep of the year and to match the best 66-game start in franchise history.

Instead, their MLB-best record fell to 49-17 and their lead in the AL East dropped to 11 games over Toronto as the Yankees prepare for another series against the Rays in St. Petersburg, Fla.

Pitching on extended rest after his start was pushed back due to a brief stint on the COVID IL, Severino allowed a season-high five runs.