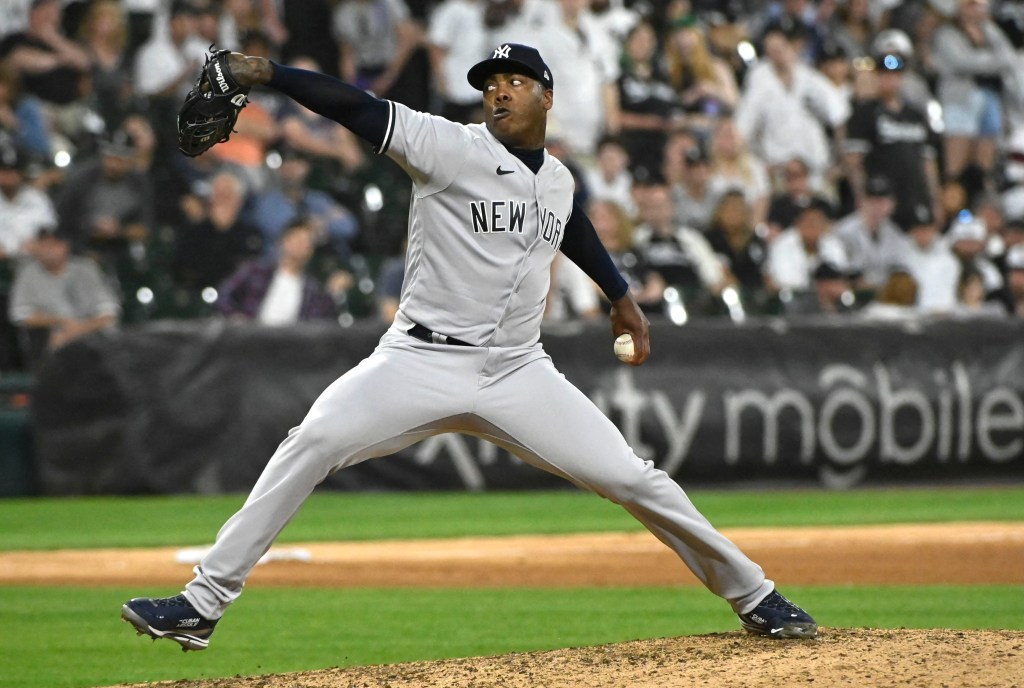 TORONTO — The Yankees bullpen has thrived for much of the season, but when they start their three-game series at Tampa Bay on Monday, they’ll get a look at some important relievers who could change the composition of the pen during the second half of the season.

Aroldis Chapman is expected to throw another live bullpen session, likely at the team’s player development complex in Tampa, perhaps on Tuesday. Chapman is recovering from left Achilles tendinitis that has kept him out since May 24.

Jonathan Loaisiga is in the early stages of a throwing program as he recovers from right shoulder inflammation.

And Domingo German is slated to pitch in a rehab game during the week, although the exact date and location are to be determined, according to manager Aaron Boone.

German will be built up as a starter, but could also pitch out of the bullpen.

Then there’s Zack Britton, who is coming back from left UCL surgery last year. He is still throwing bullpen sessions in the hope of a return to the Yankees by August or September.

“He’s trending in a really good direction,’’ Boone said of Britton, who was never healthy last season and is in the final year of his contract.In the meantime, the Yankees’ bullpen has thrived despite the injuries, with a 3.7 WAR, according to Fangraphs, largely due to the contributions in a variety of roles from relievers such as Clay Holmes, Michael King, Wandy Peralta, Clarke Schmidt and — more recently — Ron Marinaccio.

Britton hasn’t begun throwing sliders yet and needs to make more progress before a rehab stint is on the table.

The 30-year-old Owings was designated for assignment by the Orioles earlier this month after an unproductive stint in which he finished with a .397 OPS (and hit just .107) in 68 plate appearances.

Owings was better in 2020 and ’21 with Colorado, but he never turned into an everyday option after coming up with the Diamondbacks in 2014.

SWB has been without Oswaldo Cabrera (shoulder) for over a month.

The Yankees are still waiting for Joey Gallo to put together a hot streak as a Yankee, but he has had a solid start to June, at least.

Four of Gallo’s nine homers and 11 of his 18 RBIs had come in his previous nine games.

“He’s working [and] grinding,’’ Boone said. “We know what he’s capable of, especially when he really gets going. Hopefully we’ll see that power and patience at the plate.”

Anthony Rizzo had homered in consecutive games heading into Saturday and had six homers in 13 games. Rizzo went 1-for-2 with two walks, but did not hit a homer in Saturday’s win.

Francisco Lindor thriving with Mets, says best is yet to come
Keegan Bradley will be big hometown favorite in final round
Comment