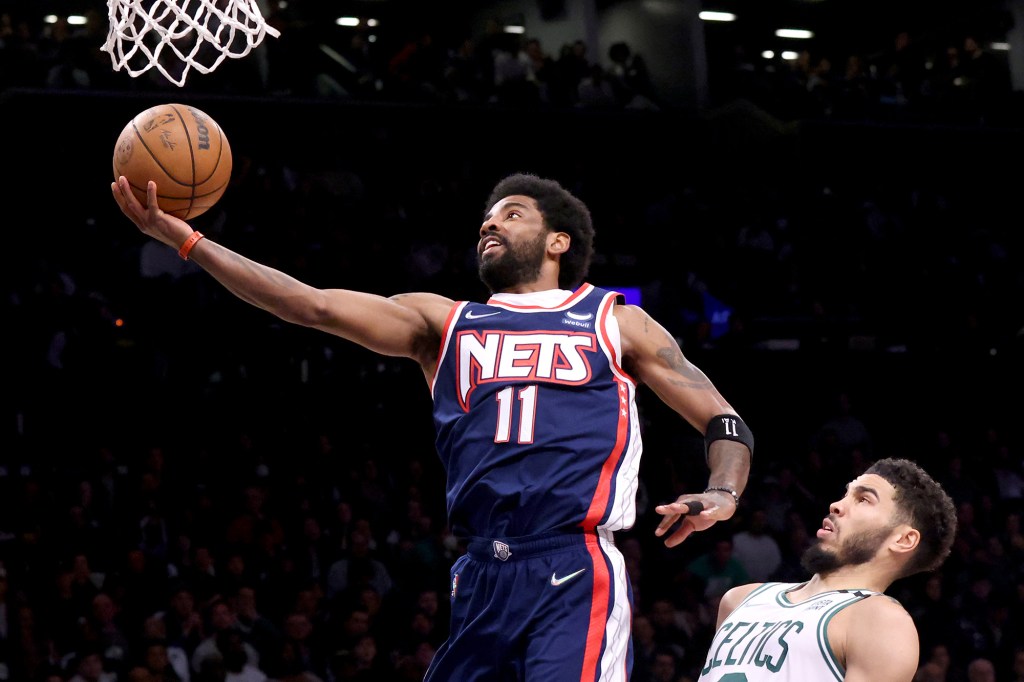 The Nets’ negotiations with Kyrie Irving were always going to be challenging, and now they’ve reportedly reached an impasse.

Irving can opt out of his contract and become a free agent at the end of this month, and conversations with Brooklyn over an extension have gone stagnant. It could lead the All-Star point guard to consider other teams, according to The Athletic.

In the wake of the season, Irving expressed not just a desire to stay but every intention of doing so.

“It has always been about being comfortable loving where I’m at, and I love it here,” Irving said after the season-ending playoff loss to Boston. “Once that summertime hits, I know that we’ll have some conversations; but there’s no way I can leave my man 7 anywhere.”

At this point, he’s either changed his mind (cue the Celtics fans chiming in), or he’s trying to bluff Nets general manager Sean Marks into believing he might.

Neither Marks nor Irving’s agent Shetellia Riley Irving had any comment.

The issue at hand is that this past season was far more of a train wreck than anybody possibly could’ve imagined. A Brooklyn team that was a preseason favorite to win the title got swept in the first round of the playoffs. And Irving played well, but logged only 29 appearances all season, largely due to his refusal to adhere to New York City’s COVID-19 vaccine mandates.

In fact, Irving has averaged 27.1 points, 6.0 assists and 4.7 rebounds on stellar .490/.406/.920 shooting splits since arriving in June 2019 alongside Kevin Durant. But injuries, personal leaves and vaccine refusals have seen him miss 123 out of 226 regular-season contests — more than half the games.

That has both raised questions about how much Brooklyn can count on him, and lowered his trade value around the NBA. Irving and the Nets have “serious work to do” to be able to hammer out an agreement, and if they don’t, The Athletic posits that the crosstown rival Knicks could be a suitor, along with the Lakers and Clippers.

Irving has until June 29 to pick up or decline his $36.9 million player option for next season. Watching the seven-time All-Star leave as a free agent would be the nuclear option and catastrophic for the Nets, who are over the cap and would have no way of replacing him. James Harden demanded a trade largely because of Irving’s unavailability. Ironically, Ben Simmons ended up not playing this year.

With all the teams that have cap space and the capacity to sign Irving as an unrestricted free agent in various stages of a rebuild, that makes a sign-and-trade the most likely means for a departure – and it has to be stressed that a departure is by no means guaranteed at this point.

The Athletic report mentioned the Lakers as a destination, but didn’t mention Russell Westbrook and his $47 million contract. Anthony Davis clearly seems unlikely. And in speculating about the Clippers, the report stated that two or three of Reggie Jackson, Luke Kennard, Marcus Morris and Norman Powell would fit salary-wise with young sweeteners like Brandon Boston or Terance Mann. But it gives an idea how depressed the market is for Irving.

Neither team has a first-round selection in Thursday’s draft, with the Knicks holding pick No. 11.

The report follows one by Jake Fischer last week in an online chat with Eddie Gonzalez of Boardroom, owned by Durant, in which Fischer cast doubt on Irving’s future in Brooklyn. But rest assured, Marks would consult with not only Nets owner Joe Tsai but also Durant before making any seismic move like dealing Irving.