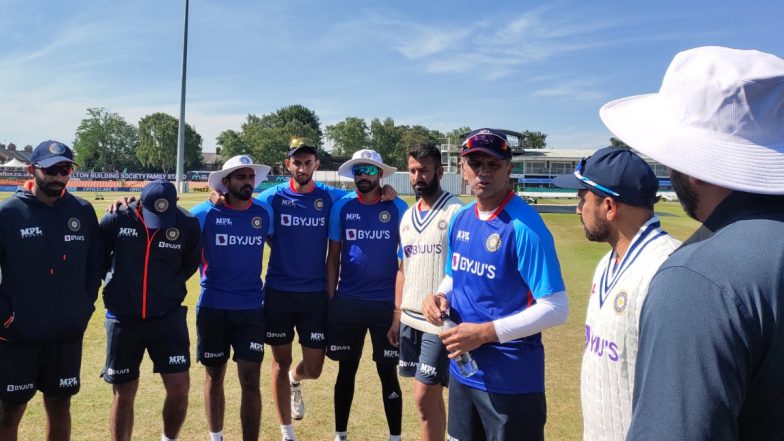 London, June 21 (IANS) India head coach Rahul Dravid on Tuesday joined India’s Test team in Leicestershire ahead of the much-anticipated rescheduled 5th Test against England, scheduled to be held in Birmingham from July 1 to 5. Dravid along with Rishabh Pant and Shreyas Iyer, who were part of the just-concluded T20I series against South Africa, flew from Bengaluru a day after the fifth and final T20I ended on Sunday. India vs England: Skipper Rohit Sharma Begins Practice With Test Team at Training Base in Leicestershire.

In the pictures, shared by BCCI’s official Twitter handle, the head coach can be seen interacting with the players, who had their training session in Leicestershire County Ground. “Look who’s here! Head Coach Rahul Dravid has joined the Test squad in Leicester #TeamIndia,” tweeted BCCI along with pictures.

Before Dravid’s arrival, India’s training sessions in England were handled by bowling coach Paras Mhambrey and batting coach Vikram Rathour. While the Rishabh Pant-led side was playing T20Is in India, Test regulars, including Virat Kohli, captain Rohit Sharma, Ravindra Jadeja, Cheteshwar Pujara and Shardul Thakur among others had left for England earlier.

Meanwhile, premier Indian spinner R Ashwin, who missed the flight to the UK with the Test squad last week, will reach England in the next couple of days. He is expected to join the squad in Leicester before the four-day warm-up game against the county which begins on June 24.

The off-spinner had failed to board the flight from Mumbai on June 16 along with other members because of a positive Covid-19 result. It has been learnt that new travel arrangements are being made for the veteran cricketer and he should be with the rest of his teammates soon, a Cricbuzz report said.

Jayant Yadav was kept as a standby should Ashwin fail to recover in time. The Haryana spinner was called to the NCA in Bangalore. However, that option has been ruled out as Ashwin has recovered fully and is expected to fly out in the next 24 hours, most probably on Wednesday.

(The above story first appeared on Reportr Door on Jun 21, 2022 08:47 PM IST. For more news and updates on politics, world, sports, entertainment and lifestyle, log on to our website reportrdoor.com).