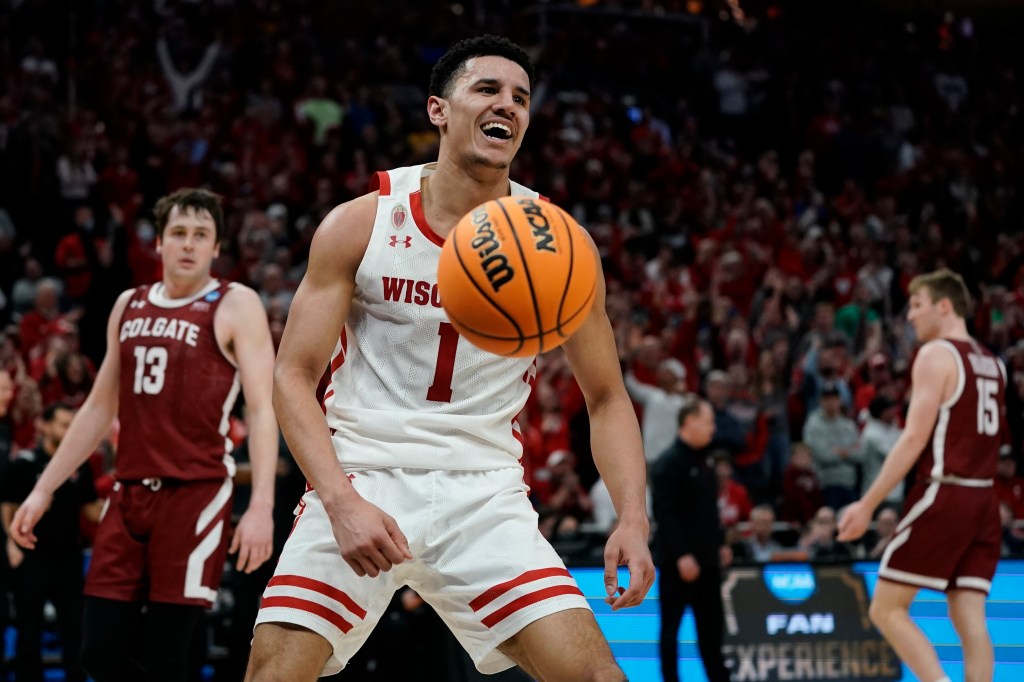 Johnny Davis was one of the most improved players in the country last year, going from a role player to the Big Ten Player of the Year.

Now, the 6-foot-5 standout will likely hear his name called during the NBA lottery, and one team of interest is the Knicks. Davis wouldn’t mind calling New York City home.

“I feel that Tom Thibodeau is really high on defensive guys, so I feel like if I was to get drafted by the Knicks I could come in and make an impact immediately on the defensive end especially,” he said over Zoom on Monday.

Davis was known more for offense at Wisconsin, averaging 19.7 points, 8.2 rebounds and 2.1 assists for the Badgers, but one scout said his defense is undervalued. The scout also believes his low 3-point shooting percentage — he hit only 30.6 percent from deep this past season, compared to 38.9 the season before — isn’t a major concern because of the types of shots he had to take.

“He’s incredibly competitive,” the scout said. “Plays both ends of the floor. Can get to his midrange jumper at any point.”

Davis didn’t work out for the Knicks, but he did speak to them at the draft combine, and if they can’t move up from the 11th overall pick for one of the point guards they like, Purdue’s Jaden Ivey or Dyson Daniels of G-League Ignite, surrounding RJ Barrett with a talented, two-way wing like Davis could make sense.

Duke center Mark Williams could be an option for the Knicks when they pick at 11, considering the uncertainty of free agent-to-be Mitchell Robinson. The 7-foot-2 Williams, who helped Duke reach the Final Four and produced 11.2 points, 7.4 rebounds and 2.8 blocks per game, had an individual workout for the Knicks.

“It went well. I feel like I went after it,” Williams said. “Every drill we did, I feel like I did pretty well. As far as fit, the things I bring to a team immediately, just a guy who’s going to run the floor, catch lobs, defend and protect the rim, want to win. Ultimately, [those are] the biggest things I can bring from Day 1.”

LSU wing Tari Eason, projected to go anywhere from late in the lottery into the early 20s, said he had a group workout with the Knicks. Similar to G-League Elite wing Marjon Beauchamp, Eason could be an option to the Knicks if they move down in the draft.

The NBA released the Las Vegas summer league schedule on Monday. The Knicks will open with the Warriors on July 8 at 8 p.m. EDT. They will also face the Bulls at 5 p.m. July 10, the Trail Blazers at 11 p.m. July 11 and the Magic at 7:30 p.m. July 14. Every team gets at least one playoff game.