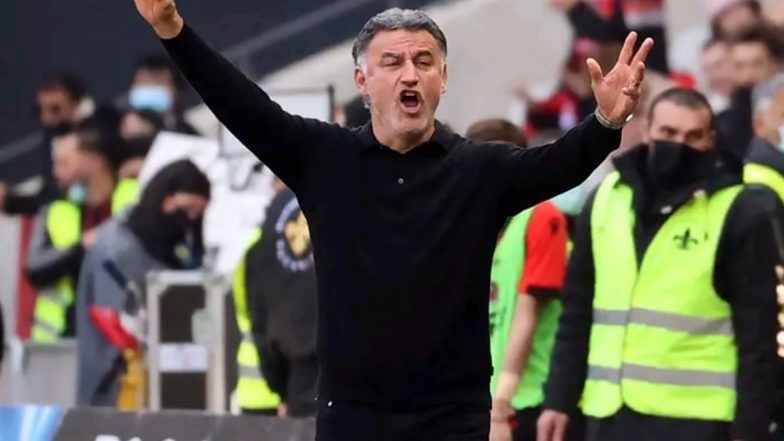 Paris Saint Germain are close to appointing a new manager as Christopher Galtier has been linked with taking the job in the hot seat at Parc de Princes. Mauricio Pochettino is set to part ways with the club following a mutual agreement after leading them to the Ligue 1 title last season. PSG Transfer News: Parisians Join Race For Lille’s Renato Sanches.

According to The Athletic, PSG are set to appoint Christopher Galtier as Mauricio Pochettino’s replacement. The 55-year-old has been one of the top choices for the new sporting director Luis Campos, who has worked with him in the past.

PSG are expected to pay a compensation fee of €10m to Nice to acquire the services of the French manager. Galtier led Nice to a fifth-place finish in Ligue 1 last season but is best known for guiding Lile to the domestic title in the 2020-21 season over PSG.

Zinedine Zidane was one of the other major candidates for the managerial job but the Frenchman reportedly rejected the offer. The former Real Madrid boss is hoping to take over from Didier Deschamps as France manager if the position becomes available after the winter world cup.

Christopher Galtier previously worked with Luis Campos at Lille as the two ended PSG’s dominance in the league. However, the two parties have not yet reached a complete agreement as contract talks are still underway.

PSG have maintained an interest in a number of players this summer. They are linked with Rebato Sanches, who was an important member of Galtier’s league-winning Lille outfit.

The Parisians however, have closed in on the signing of midfielder Vítor Ferreira from Porto and are also aiming to land Slovakian and Inter Milan centre-back Milan Skrinar.

(The above story first appeared on Reportr Door on Jun 21, 2022 09:09 AM IST. For more news and updates on politics, world, sports, entertainment and lifestyle, log on to our website reportrdoor.com).