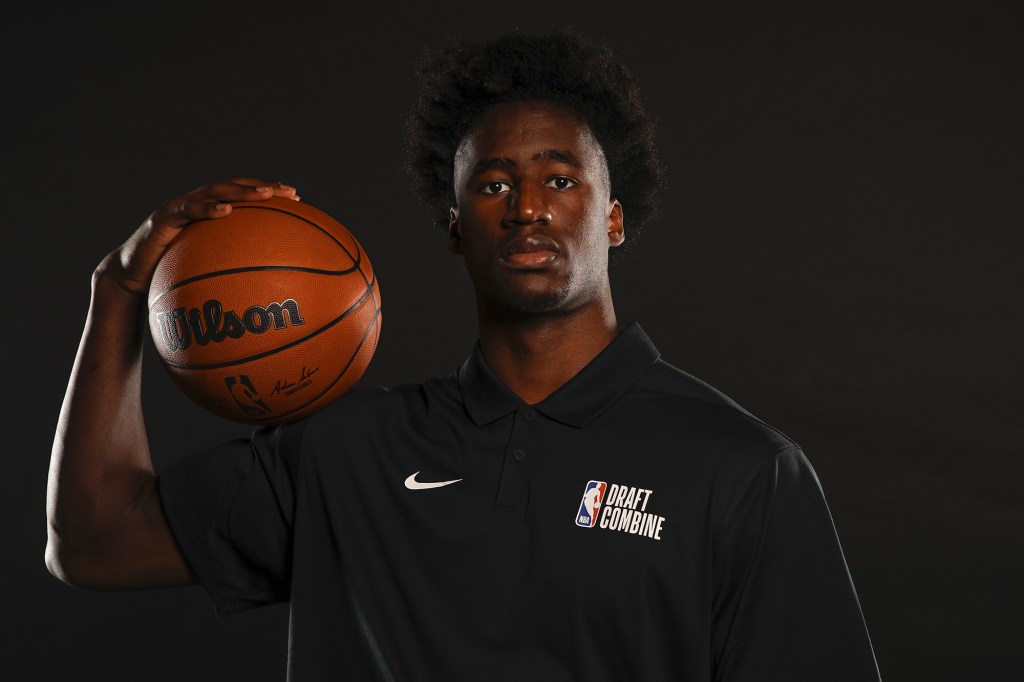 Sitting courtside, AJ Griffin couldn’t help himself. His mind would wander, imagining himself on the NBA court throwing down dunks and hitting long jump shots.

He was only in third grade then, tagging along with his father, Adrian, an NBA assistant coach.

“Going to the games you see the behind the scenes stuff,” Griffin told The Post in a phone interview. “Just getting to see it early made my dream come alive. Being surrounded by basketball as your whole childhood it’s hard not to fall in love with basketball.”

Soon, that dream will become a reality, and it may happen close to his Ossining, N.Y., home. Griffin, a 6-foot-6 guard considered one of the best shooters in the draft, could fall to the Knicks at 11, and they have shown a significant amount of interest in him. The Knicks brought him in for an individual workout, attended his pro day in Los Angeles and have put a lot of time into vetting him, according to sources. Furthermore, his father, now the lead assistant with the Raptors, previously worked with Knicks coach Tom Thibodeau with the Bulls.

Griffin is familiar with several players on the team, in particular RJ Barrett and Obi Toppin. He’s met Barrett a few times and played youth basketball with Toppin, a Westchester native like Griffin.

“That would be pretty cool to play for your hometown,” Griffin said. “I played in MSG two times last year, and it’s just an experience like no other.”

Griffin is one of the more debated prospects who have been invited to the green room, a projected lottery pick who was once considered a lock to go in the top 10. According to multiple scouts, there are questions about his consistency and athleticism relating to his injury history.

He had back issues as a sophomore in high school, dislocated his left knee the following year and suffered a sprained right knee prior to this season at Duke. He was a part-time starter for the Blue Devils this year, averaging 10.4 points and 3.9 rebounds while shooting 44.7 percent from 3-point range.

“There’s some concern with the injuries,” one scout said. “But he is 6-6 with a chiseled frame and he shot 45 percent from 3.”

The counterpoint to the criticism is Griffin was on a loaded team that asked him to fill a particular role as a court-spacing marksman, Duke assistant coach Chris Carrawell said. He had some monster games: 27 points in a rout of North Carolina, 21 in an ACC Tournament semifinal win over Miami, 18 in the Elite Eight against Arkansas. Griffin didn’t have a senior season of high school due to COVID-19, and dealt with the early knee injury this year that slowed his progress.

“Everything has its timing and you just continue to work,” Griffin said. “I’ve been seeing progress.”

He added: “I feel like I can show much more [than I did in college].”

ESPN college basketball analyst and draft guru Fran Fraschilla didn’t see the same athleticism from Griffin at Duke as he did in high school, but attributed part of that to the injuries, and sees an extremely high ceiling for Griffin, who doesn’t turn 19 until August.

“He definitely has everything you would think you would need for him to be a very good NBA player,” Fraschilla said. “I just think it’s going to take a couple of years.”

Griffin has been around the game his entire life, and, as the youngest of three siblings, was pushed at a young age. For years, he would lose to his older brother, Alan, and sister, Aubrey. They also played Division I college basketball, Alan at Illinois and Syracuse and Aubrey currently at Connecticut. It forced him to work harder and instilled a competitive spirit in him.

Griffin was regarded as one of the top prospects in the country as a freshman at Archbishop Stepinac and was one of the most coveted recruits nationally when he committed to Duke. He’s won at every level, helping Stepinac win a state championship as a freshman and the city title game the following year, contributing to Duke’s Final Four run last season and winning a gold medal with USA Basketball’s U-16 team in the FIBA Americas while in high school.

It’s all been leading up to this point — draft night Thursday at Barclays Center — when Griffin will become the first Stepinac alum to be a first-round pick and join his father in the NBA.

“It’ll be one like no other,” he said. “Sharing that moment with my family will be just an amazing time and it’s definitely going to be a memory I won’t forget.”