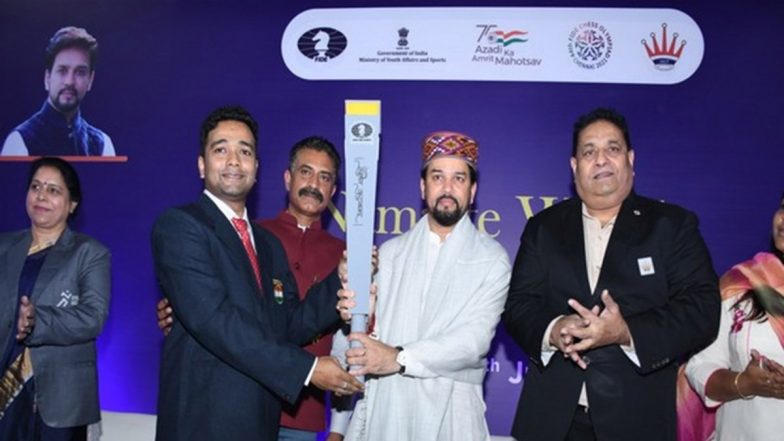 Dharamshala (Himachal Pradesh) [India], June 22: The first-ever Chess Olympiad Torch Relay reached Dharamshala on Wednesday. Minister for Youth Affairs and Sports Anurag Thakur received the torch and handed it over to Grandmaster Deep Sengupta. The torch will travel next to Shimla. “1st Ever #ChessOlympiadTorchRelay Update City 5 Dharamshala – 22nd June Hon. Union Minister of @YASMinistry and @MIB_India Sh. @ianuragthakur receives the Torch in Dharamshala, Himachal Pradesh & hands it over to GM @gmdeepsengupta,” tweeted SAI Media. Anurag Thakur also tweeted in Hindi, “Torch brings awareness, brings light to the masses. Welcomed #ChessOlympiadTorchRelay to Dharamsala. Not only hope but also full faith that this torch will increase awareness about chess game, will inspire more and more people to play chess and join it.” Anurag Thakur Promises To Leave No Stone Unturned To Popularise Chess in India.

Earlier on Tuesday, the first-ever Chess Olympiad Torch Relay reached Srinagar and then Jammu. Leh hosted the first-ever Torch Relay of the 44th Chess Olympiad on Monday. The torch, launched by Prime Minister Narendra Modi on Sunday, began its relay from Leh. The torch will travel in 75 cities for 40 days before it culminates at Mahabalipuram in Tamil Nadu. 189 countries are participating in the Chess Olympiad. Chess grandmasters will receive the torch at various identified venues. Grand Master Dibyendu Barua brought the torch from Delhi and handed it over to LG RK Mathur, to begin the relay from Leh.

In nearly 100 years of the history of the Chess Olympiad, it’s the first time that India will be hosting this prestigious event. With 188 countries registered for the upcoming Olympiad, Indian sporting history is also set to witness a huge congregation of countries on Indian soil for the first time at an event. And celebrating this, AICF has unveiled a social media campaign ‘Namaste World’, welcoming the chess community from around the world for this event.

AICF had earlier announced two Indian teams each in the open and women’s sections as the 44th Chess Olympiad has attracted 343 teams in both sections.