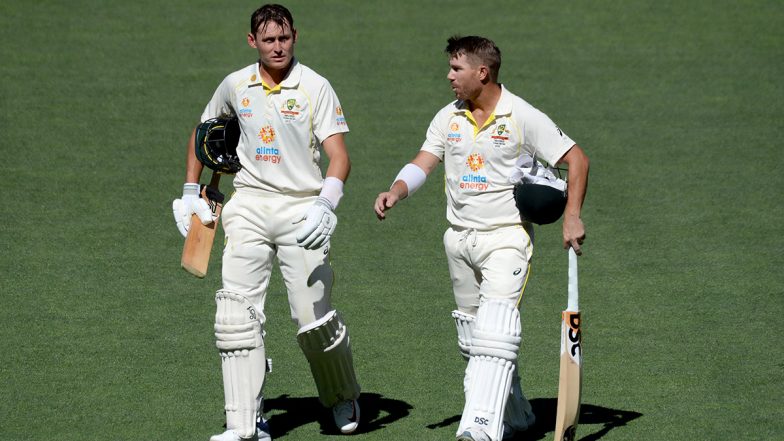 Colombo, June 22 : Australia’s veteran opener David Warner is seeing positives in the ODI series defeat against Sri Lanka, saying that the turning wickets will make the tourists counter spin much better when the two-Test series begins in Galle from June 29. Sri Lanka won the fourth One-day International at the R. Premadasa Stadium here by four wickets to take an unassailable 3-1 lead in the five-match series, with the home team spinners using the conditions well to earn a historic win against the Aaron Finch-led Australia. SL vs AUS, 4th ODI 2022: Charith Asalanka, Bowlers Lead Sri Lanka to 4-Run Win, 3–1 Series Lead Over Australia.

Warner, who was the only Australian batter to play the Sri Lankan slow bowlers with plenty of confidence scoring a 112-ball 99 as the tourists failed to counter spin in their chase of 258, indicated post-match that the “extreme” pitches in the island nation will likely backfire on the hosts in the Test series. The hosts utilised six different spinners, “exposing Australia to more than 40 overs of spin for just the fifth time in their 51-year ODI history”, according to cricket.com.au. With turning pitches expected in the two Tests at Galle, Warner said Sri Lanka might have given Australia the advantage.

“We’re always expecting turning wickets and it’s fantastic preparation for us… it’s great practice leading into the Test series,” the 35-year-old said after the four-run loss. We actually love that they’re playing on the wickets back-to-back, that’s what we want, we can’t get that practice in the nets — the nets are green. “For us it’s great practice out in the middle with these dustbowls. It’s going to be exciting for the Test matches in Galle because we know what we’re going to get there. Graeme Smith Seeks Clarity From CSA on Faf Du Plessis’ Status Ahead of T20 World Cup 2022.

“This is extreme spin, you don’t usually see these types of wickets, you only see them here. India is completely different, they’re actually good wickets and they turn day three and four. It’s about being busy — I remember playing in Dhaka, that was one of the worst wickets I’ve ever played on, and I made a hundred. It’s about committing, it’s about concentration and it’s about batting long periods of time,” added Warner.

(The above story first appeared on Reportr Door on Jun 22, 2022 11:50 AM IST. For more news and updates on politics, world, sports, entertainment and lifestyle, log on to our website reportrdoor.com).