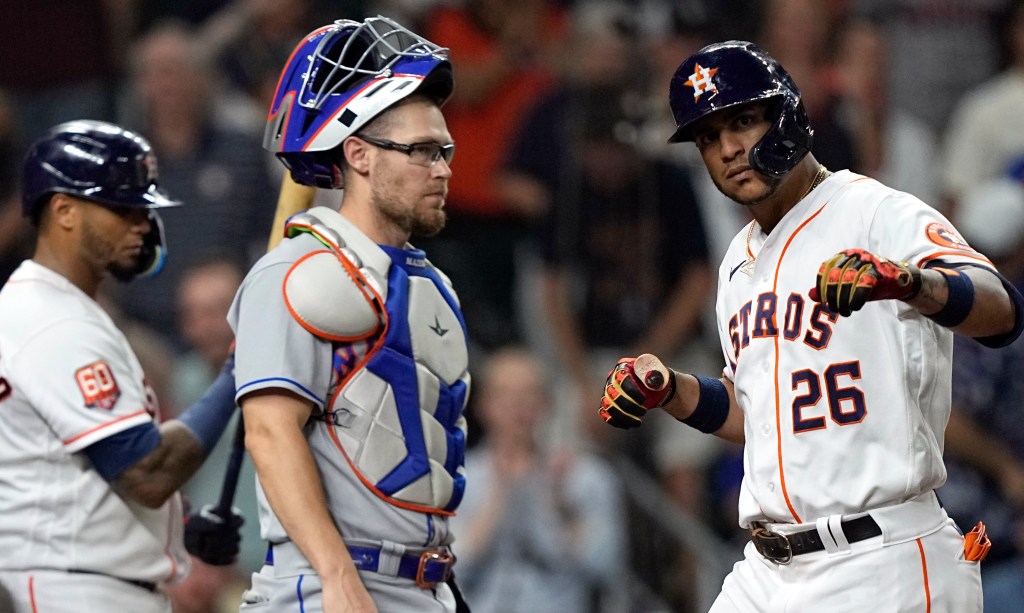 HOUSTON — The back of this patched-up Mets rotation has largely kept the team competitive, but there will be games against upper-echelon opponents when the reinforcements will be severely challenged.

Exhibit A — as in Astros — came Tuesday night deep in the heart of Texas, where Trevor Williams got jumped early and the relievers behind him didn’t offer much resistance in the Mets’ 8-2 loss at Minute Maid Park.

The bludgeoning came hours after Max Scherzer threw 65 pitches in a rehab start for Double-A Binghamton that could be the final step before he rejoins the Mets rotation. Scherzer has been sidelined for the last month-plus after straining his left oblique.

The loss was the Mets’ seventh straight in this ballpark, dating to 2011 when the Astros still played in the National League. The Mets are in town for the first time since 2017. Even with the loss the Mets (45-25) maintained their 5 ½-game lead on the Braves in the NL East.

The Astros (42-25) are dominating the AL West, having established a double-digit lead, after last season reaching the World Series and losing to the Braves.

In one of his shakiest performances as a starter this season, Williams allowed three earned runs on four hits and three walks over four innings. The Astros inflicted all of their damage against the right-hander with the long ball.

Jose Altuve led off the third with a shot into the left-field seats for the game’s first run. Williams then retired Michael Brantley, but walked Alex Bregman before Yordan Alvarez hit a two-run homer. The blast was Alvarez’s 19th this season, one behind Pete Alonso for third place in MLB.

Williams, who owns a 3.86 ERA, has joined David Peterson in keeping the rotation respectable with Scherzer, Jacob deGrom and Tylor Megill on the injured list. Williams has bounced between the bullpen and rotation, serving the team as needed.

“It’s a real tribute to him that he’s been able to dial up what we need,” manager Buck Showalter said before the game. “I can’t tell you how many times he’s come in and I’ve told him, ‘That’s it. Nice going.’ And he’s always said he’s got another inning if we need it. That has always been his response. That is kind of why he is wanted on the club and he’s been invaluable to us.”

Kyle Tucker smashed a bases-loaded double in the fifth against Chasen Shreve that scored all three runners and buried the Mets in a 6-0 hole. The lefty Shreve, in a second ugly appearance in his last three, walked three batters in the inning and allowed three hits. Mauricio Dubon’s single brought in another run.

Alonso’s 20th homer of the season — a rocket that left the bat at 107.8 mph against Jose Urquidy — pulled the Mets within 7-1 in the sixth inning. Alonso extended his MLB lead to 65 RBIs.

Eduardo Escobar — who had struck out with the bases loaded in his previous at-bat — homered leading off the seventh to give the Mets their second run. The homer was Escobar’s first since hitting for the cycle on June 6 in San Diego.

Adonis Medina surrendered a mammoth homer to Jose Siri in the eighth that extended the Astros’ lead to 8-2.