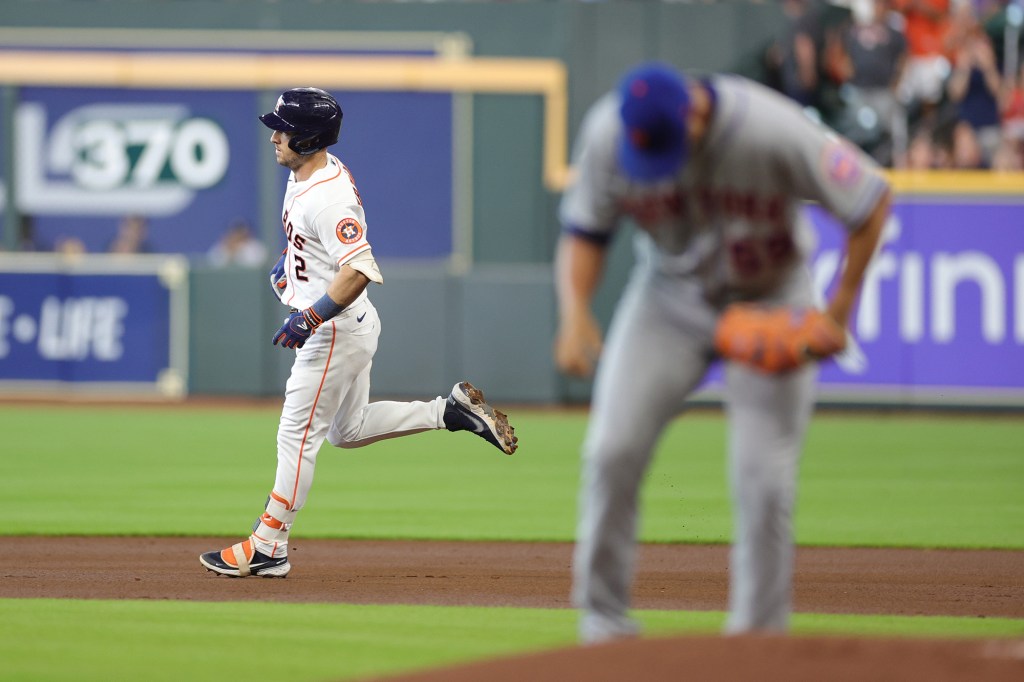 True, Carlos “Cookie” Carrasco was pounded in his abbreviated start against the Astros before departing with the trainer, but lower back tightness (as was the diagnosis) isn’t a shoulder, elbow or oblique that might leave a gaping hole in the rotation.

The good news stopped there for the Mets, who couldn’t overcome Carrasco’s erratic performance in a 5-3 loss to the Astros at Minute Maid Park. The Mets lost both games in the short series.

Carrasco got ambushed from the start. After Jose Altuve walked leading off in the first, Michael Brantley stroked an RBI double and Alex Bregman followed with a two-run homer. Yordan Alvarez’s ensuing homer gave the Astros their fourth run. Carrasco faced eight batters in the inning.

After working a perfect second inning, Carrasco surrendered a one-out homer to Alvarez in the third. The blast was Alvarez’s third of the series and gave him 21 this season, moving him into a tie for second, behind Aaron Judge, for the MLB lead. After Carrasco walked Kyle Tucker, he received a visit from manager Buck Showalter, pitching coach Jeremy Hefner and trainer Joseph Golia, and departed.

The Mets received a boost from Yoan Lopez, who pitched 2 ²/₃ innings of shutout relief to give the team a chance. It was Lopez’s second straight scoreless appearance since returning from Triple-A Syracuse on Monday.

Dominic Smith’s double leading off the third inning led to the Mets scoring their first run, on Brandon Nimmo’s sacrifice fly. Smith played first base — his first start since his recall from Triple-A Syracuse on Monday. The Mets also got a second straight solid appearance from Tommy Hunter since his return. On this day the veteran right-hander pitched 1 ¹/₃ scoreless innings in which he allowed one hit.

The Mets pulled within 5-2 in the sixth on Starling Marte’s RBI double against Luis Garcia that followed a walk to Nimmo. Pete Alonso’s sacrifice fly brought in another run. But with the bases loaded, the Mets missed a huge opportunity against Ryne Stanek as Eduardo Escobar popped out and Smith struck out. Luis Guillorme’s double and a walk to Mark Canha had loaded the bases following Francisco Lindor’s single.