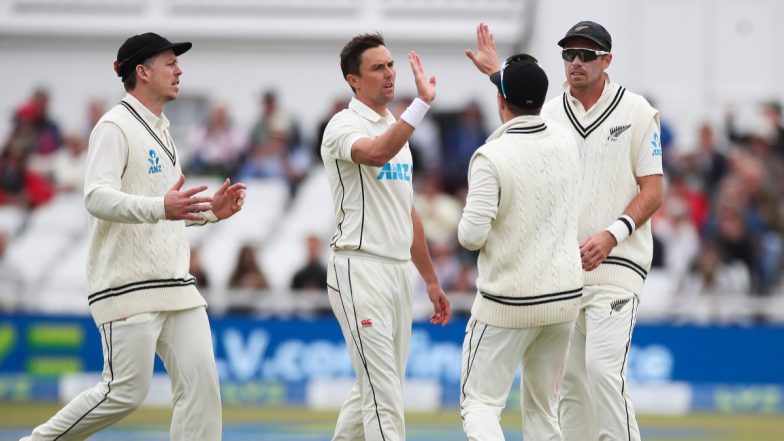 Leeds [England], June 22 : New Zealand pacer Trent Boult has backed his side to come good after an explosive knock from Jonny Bairstow blew the Kiwis away in the second Test at Nottingham, giving England a 2-0 lead in the three-match series. England and New Zealand will lock horns in the final Test of the series at Headingley in Leeds. The match will start on June 23.  Virat Kohli ‘Practicing Well’ Ahead of Rescheduled Fifth Test Against England.

“I suppose it is hard being 2-0 down in the series. But there is a lot of pride in that changing room from some of the performances we have put out over the last few years. If we are fair we probably have not been at the standards we want to be as a group, it is nice to have one game to go out and play like we know we can,” ESPNCricinfo quoted the pacer as saying.

Trent Boult could have been the Man of the Match had England failed to chase the 299-run target on the last day as he finished with figures of 8/200 in 49.3 overs in the match. But instead, he became a victim of one of longest format’s most brutal displays of batting recently, in which Jonny Bairstow smashed a 77-ball ton and ended at 136 off 92 balls.  SL vs AUS, 4th ODI 2022: Charith Asalanka, Bowlers Lead Sri Lanka to 4-Run Win, 3-1 Series Lead Over Australia.

Boult himself was smashed for three fours and three sixes by the batter, who helped England cruise to a win by five wickets with 22 overs to spare. “He has pumped me a couple of times, actually, Jonny. The way he played on that final day was very special. He really took the game by the horns and did not let go. He is definitely a big player for them in the middle order and we know how destructive he is, he’s done it many a time,” he said.

“To be on the wrong side of that result was pretty tough, but I think a lot of credit is due to some phenomenal cricket that has been played there. Nothing too much changes for us [at Headingley] but hopefully we get into him nice and early with the ball a bit new, and we will see what happens,” he added. With this defeat, the defending World Test Champions are 2-0 own in the series. The scoreline hurts Kiwis more given that one of their own has been such a key factor throughout the series. Brendon McCullum has made an astonishing impact as head coach so far, with Boult impressed by how English players absorbed his message of positivity.

“They are playing like I thought he told them to. It is a new change for English cricket. What a start, both games so far have been thrillers really. For Test cricket as a whole, hopefully, we see many more games like that, and get many more eyes watching,” he said. A major factor that played a role in NZ’s defeat was the absence of pacer Kyle Jamieson, who was unable to feature in the second innings of England for bowling after experiencing sharp pain in the lower back area.

“It is hard for Kyle, I know he is disappointed with walking off with an injury, every fast bowler is in that situation. He has played some great cricket over the last couple of years. You look at some of the guys on the sideline, everyone wants to put their hand up and go out and perform for the side. There is a guy called Neil Wagner who is keen to get out there as well, I am not sure if he will walk straight back in, but I know the XI who are selected will go out there and be desperate to do well,” he said.

Another guy who is set to walk back into the squad is skipper Kane Williamson, who was withdrawn from the second Test after testing positive for COVID-19. Michael Bracewell, and Devon Conway have also undergone their five-days of isolation after testing positive for the virus. Boult said that they are all now fit and available for selection. “He is a big player for us. His record speaks for itself, everyone is healthy and available for selection. It looks like another good wicket, so we will see what happens,” he said.

“[Kane]’s always hungry to get in the nets. He was disappointed to have to sit out the last game. It was a big game for us. He is hungry to get out there to lead the side and desperate to get some runs. I know the boys are looking forward to the challenge. There have been some good chats going on off the ground. Hopefully, we can let the bat do the talking and we will go from there,” he added.

Boult had a limited time to prepare, arriving in England with just 48 hours to acclimatise ahead of Lord’s Test. He still impressed and took three wickets in the first innings of the first Test. The bowler says that he has got the stamina and motivation to dig deep once more. “I flew through Dubai, then came to here… and then just really cracked on with it really!” he The Dukes ball is always exciting to get in your hand and it is nice to see the ball move around a little bit. It is one of those things, a lot of the guys in that group have a lot of passion to put the Black Cap on their head and the motivation for everyone is there to go out and perform. So it was an easy choice for me,” he said.

“I enjoy the conditioning side of things and the stuff that goes in off the field. It is a big challenge. Test cricket is called Test cricket for a reason and it is the format I am definitely the most passionate about. So when there is an opportunity to put the Black Cap on and the whites, I try to grab it with both hands. It has been a busy couple of months for me coming from the IPL. It is a challenge as a modern-day fast bowler to move between the formats but I love the challenge, I love the opportunity to run in for my country and the group of guys in there as well. It was nice to get away and refresh a little bit and the guys are energised and really looking forward to the next couple of the days,” he added.